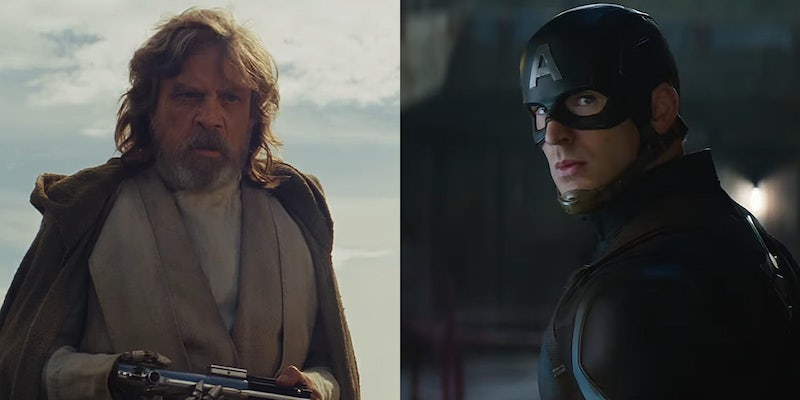 Who would win between Luke Skywalker and Captain America? Chris Evans and Mark Hamill weigh in

They both have a thought process to this.

The beauty of potential sci-fi and fantasy mashups is all of the crossover potentials. Thanks to one person’s ingenious question, we now have the ultimate fight in the making.

A fan reeled in the experts—in this case, Chris Evans and Mark Hamill—to settle the debate over the superior piece of weaponry once and for all: “Can a lightsaber cut through Captain America’s shield?” The question was first posed by Daily Dot contributor Chris Illuminati.

; I think it's time that we ask the experts on this one- @ChrisEvans and @HamillHimself, what do you fellas think?? #AskingTheRealQuestions pic.twitter.com/0xLi1wD7on

Each weapon is unique in their respective universe. Captain America’s shield is made from Vibranium, a rare metal obtained from a meteorite that’s stronger than steel and found almost exclusively in Wakanda. A lightsaber is powered by a kyber crystal that Jedi younglings used to mine for it. Both the shield and the lightsaber can be used defensively and offensively, but the latter tends to be more deadly—especially in the hands of the Sith or someone using the dark side of the Force. The shield is nearly indestructible while lightsabers “can be used to cut through blast doors or enemies alike.”

Hamill responded first, taking a look at the question from each respective universe. In the Marvel Cinematic Universe, the shield wins out, but if called to do it in the Star Wars universe, Luke could totally cut that shield up.

In the #MarvelUniverse– NO
In the #StarWarsUniverse– Luke wouldn't fight a hero, but if asked to do so, he could cut it into a million little pieces. https://t.co/9fHurwhBNl

But there’s just one problem to that conundrum, as Evans pointed out.

Granted, if Luke Skywalker could cut up Captain America’s shield into tiny pieces that Captain America could then use to throw at Luke, Luke would still have the advantage: Luke could deflect those stars with the use of the Force and his lightsaber.

Although, let’s be real. If Captain America and Luke Skywalker were in the same universe, they wouldn’t fight one another, they’d team up. Luke would likely see the darkness in Red Skull, Hydra, and Thanos, whereas Cap would take one look at the horrors of the Galactic Empire and instantly join the Rebellion.