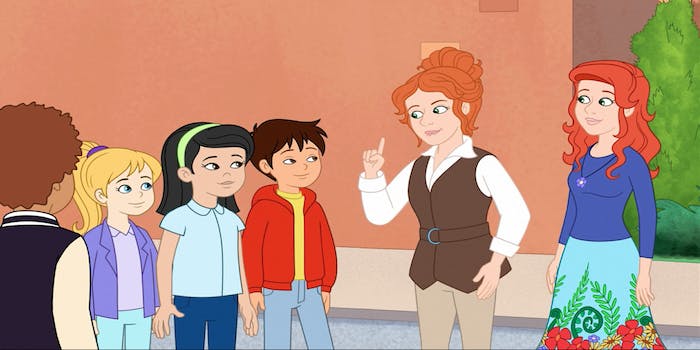 It adapts and thrives within its new ecosystem.

This review contains no major spoilers for The Magic School Bus Rides Again.

The Magic School Bus Rides Again, the Netflix reboot of the much-loved children’s show, is the latest TV reboot to hit a road paved with nostalgia. But amid sticking to the tried-and-true, it’s forging another path for Ms. Frizzle’s curious classroom of children.

When Netflix first announced The Magic School Bus Rides Again in 2014, there was certainly excitement among fans who grew up with the original ’90s series. Information was scarce for years, but Netflix kicked the project into high gear in 2017 with the reveal that Saturday Night Live’s Kate McKinnon would voice the titular Ms. Frizzle. An updated theme song from Lin-Manuel Miranda, and a brand new trailer also grabbed our attention.

As more information came out, some fans started to worry about the show. Some criticized the animation style (Rides Again is computer generated instead of the 2D animation of the original), and while many initially met McKinnon’s casting earlier this year with cheer, others were saddened that the original Ms. Frizzle, Lily Tomlin, wouldn’t be in the series. The trailer showed us otherwise: McKinnon would be playing Ms. Frizzle’s younger sister, Fiona Frizzle, and Tomlin would still voice the OG Frizzle. The new Frizz’s arrival wasn’t a replacement, just a change in the ecosystem.

After it launched on Netflix on Friday, I sat down to watch the first two episodes of The Magic School Bus Rides Again. And although I don’t have as strong of a tie to the original series as many do, the titular school bus—and the class of students—are in good hands with Fiona Felicity Frizzle, though it may still be a bit of a bumpy ride at times.

The new teacher’s arrival is shocking to all the students we know, but Fiona is more than up to the challenge of winning them over. Despite it being the first time she’s met the students on the first day of school, she knows everyone’s names, some of their personality quirks, and even what they did over the summer. I can only imagine what kind of preparation the Frizzles did ahead of time behind the scenes to make the transition as smooth as possible.

The bulk of the first episode tackles the transition inside the classroom, but also offers something of a commentary on how fans might view the show itself. The original (which is also on Netflix) is structured and set in a particular way that’s familiar and comforting. The new school year (and the reboot) rolls in with something new. It’s unfamiliar, and classily nervous student Arnold seems to mirror the audience’s worries about the new Ms. Frizzle even though she is nice and welcoming. McKinnon’s enthusiasm as Fiona Frizzle really helps to smooth the transition. (The arrival of new student Jyoti, who takes the place of Phoebe from the original series, is treated far more casually by the change-averse students.)

Arnold eventually does warm up to Ms. Frizzle by episode’s end, which then allows the show to settle into a more of a routine. The science is as approachable as ever as Ms. Frizzle explains different concepts to the children such as how ecosystems work and how aerodynamics can apply to a building structure.

And so far, the episodes each seems to focus on a particular student as they learn and grow.

Some of the other changes to the episodes so far are on the more subtle side. Rides Again is more technologically advanced—for instance, D.A. does her research on a tablet—and the reboot’s iteration of Janet is a theater critic and blogger instead of constantly sabotaging the class.

Tomlin’s Valerie Frizzle, now known as Professor Frizzle Ph.D. to differentiate between the sisters, has an important role to play in the first episode, but is otherwise off exploring the universe. She’s still always able to take a call from curious children, however.

But some things stay the same. The kids will always get themselves caught in magical and wild situations, and Carlos will always have a groan-worthy pun. And keep an eye on Ms. Frizzle’s skirts: like her older sister’s dresses, they’re always appropriate for the day’s lesson.

Will it satisfy those who have that nostalgic pull? It’s hard to say. But the new show succeeds at what it aims to do: be an educational children’s program that makes learning about science fun. With four seasons of The Magic School Bus already available, who can say no to a little more magic?

All 13 episodes of The Magic School Bus Rides Again is now streaming on Netflix.