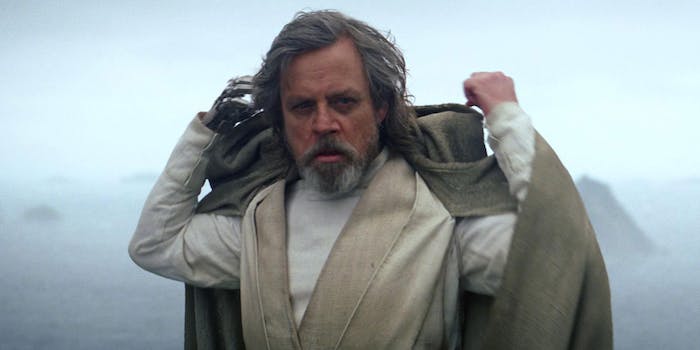 Luke Skywalker’s beard holds a clue in ‘The Last Jedi’

Warning: This post includes spoilers for 'The Last Jedi.'

This article includes spoilers for Star Wars: The Last Jedi.

In the final battle sequence of The Last Jedi, Luke Skywalker’s beard holds a clue to what’s really going on.

With the Resistance surrounded by First Order troops on the planet Crait, Luke is their only hope of escape. He arrives in the nick of time and distracts Kylo Ren with a Force duel, giving Leia and Poe a chance to get everyone to safety. But there’s a twist: Luke isn’t actually there. He’s still on Ahch-To, projecting a vision of himself across the galaxy to trick his former apprentice.

If you were paying close attention, you may have figured out the ruse immediately. That’s because Luke’s projection looks subtly different from the man we saw on Ahch-To. When he arrives on Crait, his hair and beard are no longer grey. He even looks thinner, harking back to his heyday as a powerful Jedi. Luke intentionally changed his appearance to confront Kylo Ren, but was it just vanity? Doubtful.

Luke has one goal in mind when he visits Crait. He’s there to distract Kylo Ren, and he tailored his appearance to match. Instead of looking like the grizzled old mentor Rey met on Ahch-To, he resembles the flashback scenes to when Ben Solo abandoned his Jedi training. He looks just like Kylo Ren’s last memory of Luke Skywalker, a decision calculated to have the maximum emotional impact.

You’d think that Luke’s youthful appearance would be an obvious clue that something’s wrong, but it’s actually a smart move. Kylo Ren is obsessed with the past, to the point where it clouds his judgement. He’s also overly concerned with appearances, so if Luke looked older, it might lessen his intimidation value. By appearing as his younger self, Luke steps directly into one of Kylo Ren’s most painful memories, sending him into a tailspin and making him lose focus on reality.