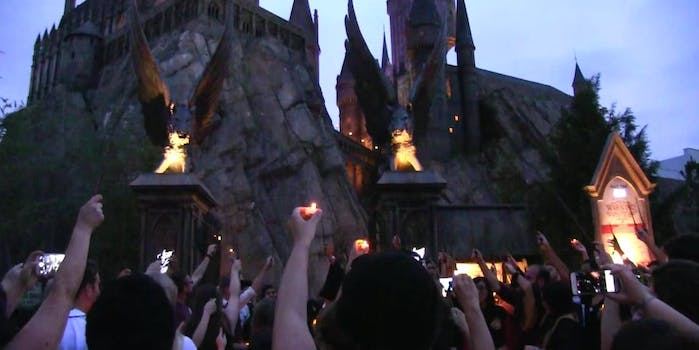 They came together to honor a fallen wizard.

The employees of Universal’s Wizarding World of Harry Potter and Harry Potter fans alike raised their wands to pay tribute to one of their own who died in the Orlando shooting.

In the wake of the shooting at Pulse, an LGBT nightclub, on Sunday morning, we’re starting to learn more about the 49 victims who were killed. Luis Vielma, a 22-year-old who died that night, was an employee at the Wizarding World of Harry Potter. His death hit Harry Potter fans hard, including J.K. Rowling, who tweeted out a photo of Vielma in his Gryffindor uniform and wrote, “I can’t stop crying.” She passed along condolences and well wishes for another employee who had been injured in the shooting.

Trust me, you would have loved him. He was the guy in the breakroom you liked four seconds after walking in.

From the President and COO of Universal Orlando Resort pic.twitter.com/OmuNmUORpQ

Monday night, some of Vielma’s fellow team members at the Wizarding World of Harry Potter were joined by park attendees in front of Hogwarts castle to pay tribute to Vielma. Some raised their phones, some held candles, and some of them held up wands in a similar manner to how students of Hogwarts honored Albus Dumbledore after his death in The Half-Blood Prince.

“Every single member of Harry Potter and the Forbidden Journey, every person he touched at Universal Studios, every person he came across, he created the type of magic for them that could never be compared to anything else in this world,” one of Vielma’s fellow team members said on the verge of tears. “Tonight we remember a team member, a brother, a son, a friend. Tonight we remember someone who created the type of magic we could never replace.”