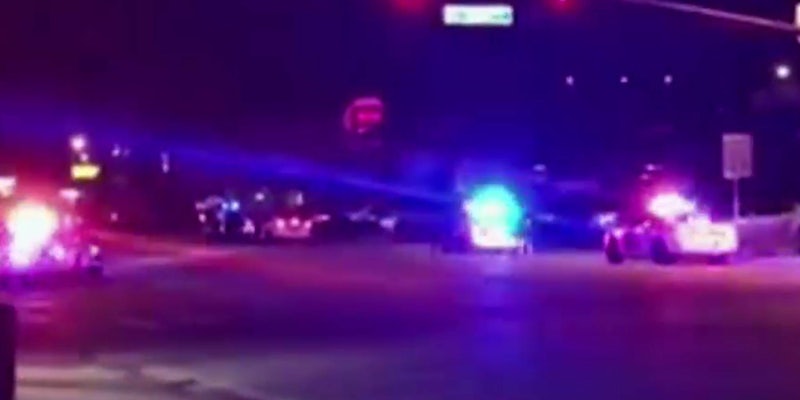 A lone gunman opened fire and took hostages at Florida gay club Pulse at around 2am on Sunday morning.

In one of the worst mass shootings in U.S. history, 49 people have been killed and 53 have been injured at the Pulse nightclub in Orlando, Florida. Pulse is one of Orlando’s most popular gay clubs and was hosting a Latin-themed night at the time.

The attack began at around 2am on Sunday morning, with a single gunman opening fire and taking hostages inside the club. Police entered three hours later, killing the gunman.

Speaking at a press conference on Sunday morning, Orlando Police Chief John Mina said the shooter was carrying an assault rifle and handgun and had a “suspicious device” attached to his body. At around 5am, Orlando police confirmed the detonation of a controlled explosion at the club.

. @ChiefJohnMina multiple people dead inside the club. Many casualties transported to hospitals. pic.twitter.com/0Lf69tClad

“The shooter took hostages and at about 5am we entered and exchanged gunfire with the suspect and he was dead at the scene,” said Chief Mina. “Nine officers were involved and one of our officers was injured. At least 30 people were saved during the rescue.”

During the attack, Pulse’s official Facebook page posted a status update saying, “Everyone get out of pulse and keep running.”

Eyewitness Ricardo Negron Almodovar replied to the post, saying: “I was there. Shooter opened fire @ around 2:00am. People on the dance floor and bar got down on the floor and some of us who were near the bar and back exit managed to go out through the outdoor area and just ran. I am safely home and hoping everyone gets home safely as well :(“

PHOTOS: This is the scene at the #Pulse nightclub mass shooting. You can see nightclub behind the dozens of vehicles pic.twitter.com/PccAwwjlCE

At a press conference on Sunday morning, an FBI spokesperson described the shooting as a terrorist attack, and said that the shooter “had leanings towards” Islamic extremism. The FBI will be leading the investigation into the shooter, who has not yet been identified to the press.

Updated 9:30am, June 12: Orlando Mayor Buddy Dyer has confirmed that 50 people died during the attack, and 53 have now been hospitalized.