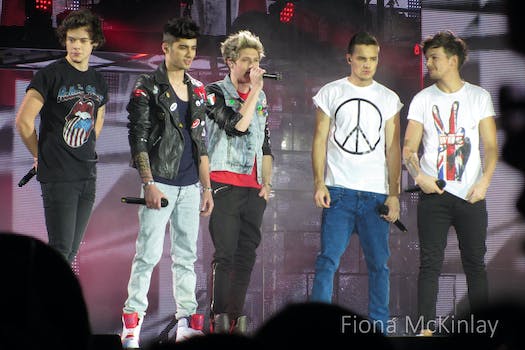 It finally happened. One of the members of One Direction allegedly said, “I’m gay,” and now 1D fandom is having a meltdown. The fact that he was almost certainly joking doesn’t seem to matter.

The band spent Valentine’s Day together in Melbourne, going for a boys’ night out on the town. This would be a pretty banal story, were it not for the fact that Louis Tomlinson got drunk and said, “I’m gay. It’s pretty unfortunate isn’t it, Eleanor?” before being hastily shushed by a security guard. A fan caught the whole thing on tape, and now #ImGayItsPrettyUnfortunate is trending worldwide on Twitter.

Eleanor is the name of Tomlinson’s girlfriend, so it seems obvious that he was kidding. But what you’ve got to remember here is that Louis Tomlinson is one half of the Larry Stylinson conspiracy theory, which posits that he and Harry Styles are secretly in a relationship. According to Larry truthers, the pair have been forced into the closet by their management company, and Tomlinson’s girlfriend Eleanor Calder is a hired beard.

One of the central tenets of Larry Stylinson fandom is that at some point, one or both of the singers will come out in public—and then almost certainly be hushed up by their managers. This belief has become so ritualized that fans often post specific dates and times when Larry will make the announcement, which is why thousands of fans are now retweeting this Nostradamus-like prediction from last December:

"if you are seeing 1D on february 14 in melbourne australia and u ship larry, just u wait. i know things. big things."

Larry Stylinson fandom has been going for years, and shows no sign of letting up. Last year they turned a random guy into a meme because his Twitter account was supposedly deleted by “management” after he posted about seeing Styles and Tomlinson out on a date. In 2013, a man named Keith Calder became the latest thread in the conspiracy, as Larry truthers decided that he must be Eleanor Calder’s brother and might hold the answers to the Larry Stylinson cover-up. (He wasn’t, and he didn’t. But he’s still being questioned and followed by hundreds of 1D fans, to the point where Internet culture podcast Reply All dedicated an episode to him a couple of months ago.)

Totally fascinated by the One Direction fan community and their collective skill at building (or discovering) compelling narratives.

The original Vine has now gone through more than 300,000 loops, with reactions ranging from supportive (“i love louis no matter what sexual orientation he is”) to realistic (“In the video you can clearly tell he was joking my god”) to the inevitable onrush of die-hard Larry believers.

I'm afraid to go to sleep cause knowing my luck Larry will come out. You can't fucking sleep cause you will miss everything.

Tomlinson is most likely feeling very annoyed with himself right now. He’s spent years being scrutinized for any sign of Larry-related clues, and no matter how much he denies, ignores, or even casually acknowledges the rumors, there is no escape. Being caught on camera saying that he’s gay— even as a joke—is the ultimate nail in the coffin.

Larry Stylinson fans finally have the proof they need, and they will never, ever give up.