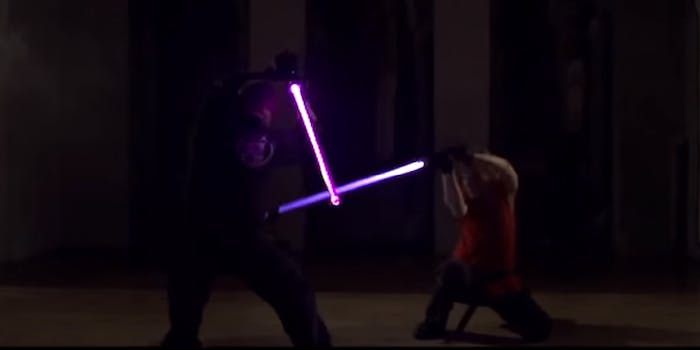 ‘Lightsaber Combat for Beginners’ will complete your Jedi training

Meet the man who wrote the (best-selling) book on lightsaber training.

The Jedi of the Star Wars universe spent years training as Padawans before earning their title. They must uphold Jedi values, understand the Force, and most notably, learn the ways of the lightsaber. In that world, it’s the only way to earn Jedi-ship.

Finding a Jedi master may be an elusive endeavor, but it isn’t necessary to learn the martial arts techniques of lightsaber warfare. Instead, the emergence of a step-by-step instructional guide has come to teach all who wish to learn.

Stunt Lightsaber Combat for Beginners: The Unofficial Guide to Dueling like a Jedi was released in December, shortly after the premiere of The Force Awakens. Since then, both the Kindle and paperback versions have been named best sellers in the Amazon Books martial arts section. 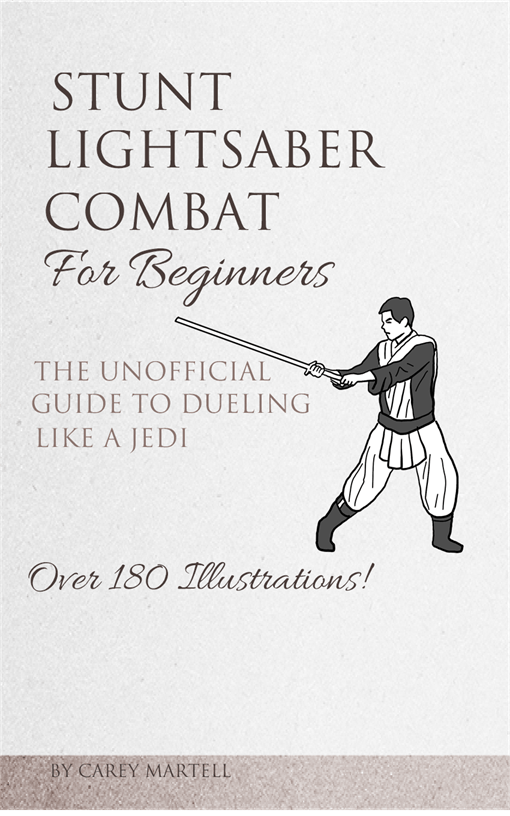 Just as Jedi masters are hard to find, it’s more difficult to find one who would write a book. If not Luke Skywalker (what exactly did he do all alone on that island?) one might expect the author to be the epitome of a Star Wars fan. OK, fine: We’d expect a giant nerd to write a book about fictional sword-fighting.

While Carey Martell is an avid Star Wars fan, he’s also a successful business man and U.S. Army veteran with significant martial arts experience. Among his training: taekwondo, Brazilian jiujitsu, aikido, eskrima (a Filipino stick-style art), and a number of other disciplines.

Based in Austin, Texas, Martell serves as CEO and founder of Martell Broadcasting Systems, an Internet television and digital media company. He also sidelined as a host for the RPG Fanatic Video Game Review Show on YouTube in the past and publishes as a fiction and non-fiction writer through Martell Books. “Martell Books is just a way for me to write about what I’m interested in and what I think people would like to read about,” Martell said.

The typical subjects Martell covers in his books revolve around social media and startups, but Lightsaber Combat is a drastic departure. “I usually write about ‘How do you build an audience on Facebook?’ or ‘How do you turn your music channel into a business?’… [Lightsaber Combat] is very different because it’s a martial arts book,” he added.

According to Martell, the market offered nothing of the sort when it came to instructional lightsaber manuals. YouTube channels offer assorted clips, or technique patterns, but didn’t focus on the combat application—and there was a bigger isse.

“I noticed there was a number of YouTube channels where people were constructing forms, but I noticed some form ones were different than another’s,” he explained. 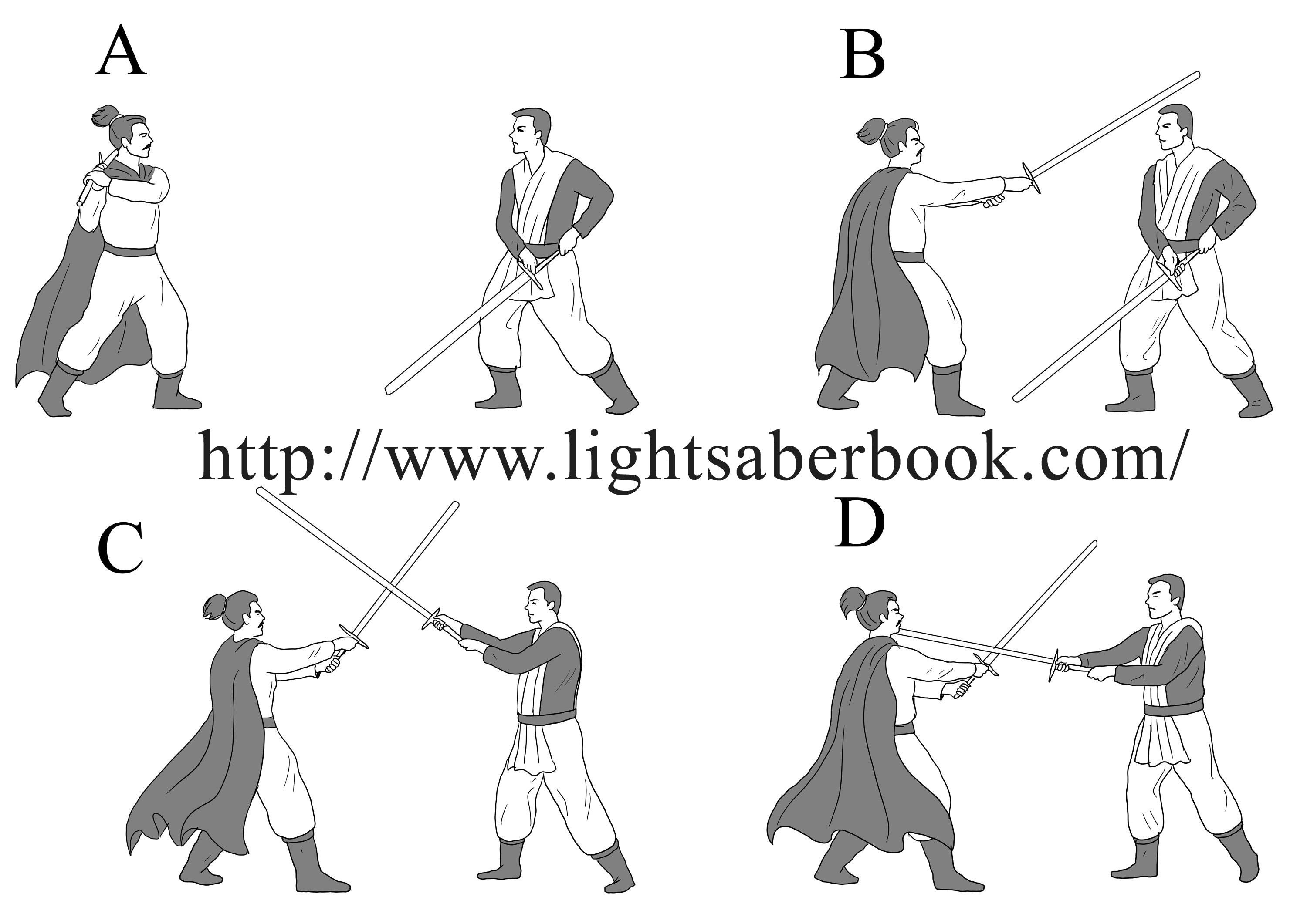 In writing the Lightsaber Combat book, Martell had a handful of goals in mind: provide people with a fun way to work out, establish a straightforward guide that can be used as a standard for possible tournaments, and expose people to different martial art forms—especially historic European martial arts, or HEMA.

“Think of [the book] as a gateway drug to European swordsmanship,” Martell joked.

Analyzing the fight scenes from the original trilogy, Martell noticed a strong parallel between HEMA techniques and the choreography. “I thought a lot of those techniques were very similar to what I had seen in the Star Wars films,” he said. “In Return of the Jedi and The Empire Strikes Back, the choreographer between Luke and Darth Vader was named Bob Anderson. He adapted some Western-style technique from German and Italian masters and combined them with Kendo.”

Martell also noted the similarities between eskrima and lightsaber fighting, but decided HEMA would be a better fit for adapting the technique due to the weapons themselves. “The dynamics of a lightsaber are actually different than an eskrima stick [because of] optics, battery packs, and the hilt,” he explained. “So while there are similarities, it’s actually not most ideal.”

Although Martell’s book discusses HEMA techniques, it’s not like other HEMA books. Normally the names of strikes, blocks, and even stances are written in the language of their country of origin, he said.

“What I could never get over is that they left a lot of things untranslated,” Martell said. “I have to use a translator to understand the words.”

To accommodate his audience, Martell wrote everything in English, making it easy to read and understand. “You don’t have to learn a foreign language to practice,” he explained. “I wanted it to be something that anybody—at least who spoke English—could understand.”

In this regard, learning Lightsaber Combat becomes highly attainable.

However there is much more to learn beyond the single book Martell has published thus far. In fact, this book only covers two-handed saber wields. Plans for the next book will include single-handed and dual-wielding, according to Martell. Future material will also include disarming an opponent and interactive warm-up exercises (such as performing sit-ups with your lightsaber).

Requests have also been coming in for the author to write a book about saberstaff, best known as Darth Maul’s iconic technique. This particular style borrows from the Asian martial arts more so than the European ones, according to Martell. “[This one] combines technique from the jo—a Japanese short staff—and also from a blade from wushu called heaven and earth blade,” he said.

Unlike a regular staff, most of the lightsaberstaff comprises of lasers, save for the middle. So you can’t hold the end of the stick, lest you want to earn yourself a robotic hand like Luke’s. “You’re limited with the techniques you can do,” Martell noted.

In the spirit of putting this all to practice, Martell divulged his plans to open a school devoted to lightsaber combat in San Antonio. Starting off, Martell wants to focus on classes for kids. “It seems there’s a lot of kids who would like to get into martial arts,” he observed. “I thought maybe opening a school just for lightsabers would be kind of neat.” The inspiration came from an Italian group called LudoSport who have been teaching the same techniques in Italy.

While Martell has garnered a lot of support, he’s been on the receiving end of many Reddit criticism. “That’s fine,” Martell said. “It’s not for everybody.” Some who actively participate in swordsmanship and HEMA, express its superiority over lightsaber combat as a martial art.

“Some people would prefer that if you’re going to learn swordsmanship you should learn the real sword,” he said. “I’m more open-minded. I think it’s fun to use a lightsaber.”