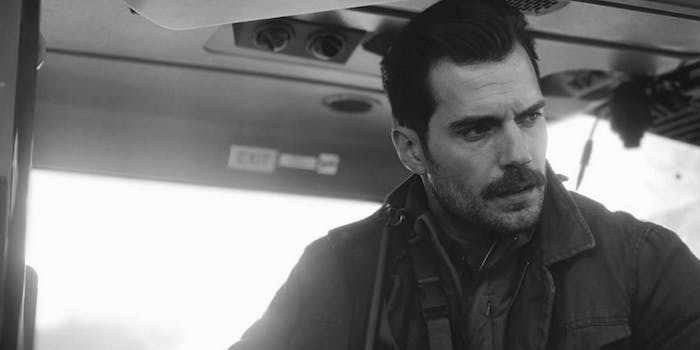 Henry Cavill‘s Superman is many things, but no one would describe him as “fun.” Thanks to a rather bizarre facial hair mishap, that’s about to change.

After the unexpected departure of director Zack Snyder, Justice League is going through extensive reshoots with Joss Whedon. This means pulling actors out of their schedules with other movies, and in Henry Cavill’s case, that created a unique problem. His mustache.

In the latest Mission: Impossible movie, Cavill plays a character with a luxuriant mustache. And according to a deeply hilarious report from Variety, “Paramount, which is distributing the Mission: Impossible sequel, would not allow Cavill to shave the facial hair while production was taking place.” So right now, Cavill is filming Superman scenes with a mustache, which will then be digitally removed in post-production.

In an act of defiance, I digitally added the mustache back in. (It took my guys at Skywalker Ranch 600 hours and 2 billion dollars.) pic.twitter.com/j2ZnWyWT6f

Incredibly, this isn’t the first time Joss Whedon has dealt with this exact problem. When filming the post-credits “shawarma” scene for Avengers, Chris Evans had already grown a beard for another movie. Speaking to Variety, his co-star Jeremy Renner explained that Evans had to film the entire scene in dubious prosthetics. (In the final product, you can kind of tell that he’s hiding his face.)

If there’s any justice in the world, Warner Bros. will release some pre-CGI outtakes of Superman with the full mustache visible. It’s the least they can do, after the last two Superman movies were so utterly lacking in comedy.