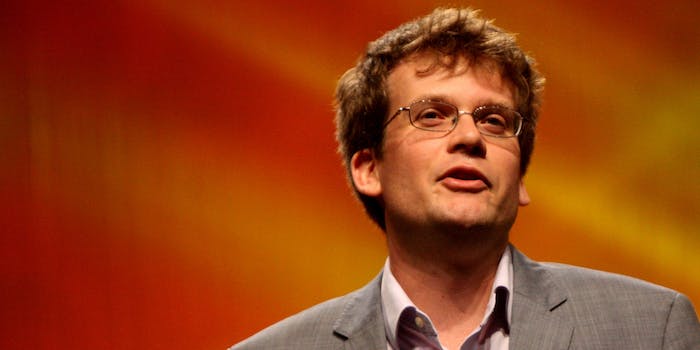 Reddit’s “Today I Fucked Up” section is a place where, as a way of seeking catharsis, users can tell the Internet just how inappropriate, rotten, or just plain stupid you’ve been lately. The perfect place, in other words, to explain that you caused beloved young adult author John Green to have a panic attack at a Book of Mormon performance by aggressively hugging him.

I went to see The Book of Mormon Saturday night in Indianapolis. At intermission, I hit the loo, got another beer (a mistake, it seems), and met up with my husband to head back to our seats. Spotted John Green ahead of me. Told my husband who he was and SPRINTED toward him. Realized midway that I didn’t really have a plan. What was I going to say when I got there? By the time I formed the thought, it was too late and I was tipsy and excited, so I did the first thing that came to my mind. I said, “I’m sorry, but I have to do this.” And hugged him. Him: “That…was very nice of you.” Me: “No, that was very nice of YOU.” Then I ran away before he had a chance to call security on me.

She later heard through the grapevine that Green was appalled by the encounter and “doesn’t like to be touched too much by approaching fans—probably because it makes him anxious.” She apologized for the “assault,” noting that Green “doesn’t get a moment’s peace in this town to begin with,” and reprimanded herself for not being as awesome as him.

But, true to form, Green soon emerged in the thread with a heartfelt reply. He did have a panic attack at the end of the musical, he explained, though it had nothing to do with the surprise hug—rather his “faulty brain wiring.” He then cut to the heart of the issue:

I am very grateful that you think highly enough of me or my work to want to say hi. It’s incredibly difficult in that situation to express mutual gratitude, because it’s an inherently heightened and unnatural dynamic in which it’s very difficult for either of us to imagine the other as a complicated human being going through all the things that complicated humans go through. But thank you. I once met a writer I really admired at a reception for an award they won, and they were really rude to me. It bugged me for years. Then we met again at a book conference and had a great conversation, and after a long while I said, “I hope this doesn’t seem weird to mention, but you’re much friendlier than you were the last time we met.” They didn’t remember meeting me, so I reminded them of the occasion. And this writer I admire so much said, “Oh God! I’m so sorry! I’d found out that my dad had died an hour before and my publisher didn’t want me to miss that reception, and it was this joyful occasion and my dad was dead and I was just—I’m sorry! I’m so sorry I was rude to you!” And then of course I had to apologize for this resentment I’d held for years. So you never really know someone else’s experience, is I guess what I’m saying, but we’re all doing our best, and I was glad to meet you, and thanks again for responding generously to my work.

See? Happy endings are possible. Unless (spoiler alert) you’re a teen with cancer in a John Green book.