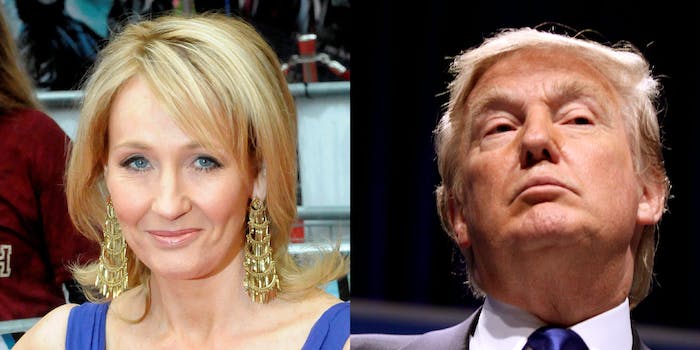 She doesn't hold back.

J.K. Rowling has been no stranger to offering wry commentary on politics—especially Donald Trump tweets—and her latest retort to one of the president’s tweetstorms is no exception.

Trump took to Twitter Tuesday night to respond to Hillary Clinton’s comments that partially put blame for her election loss on FBI Director James Comey’s letter about her emails, which came out days before the election. Trump, on the other hand, claimed that the FBI director had actually helped Clinton.

The election has remained a sore spot for Trump, who lost the popular vote. He’s still bringing up his Electoral College win to voters and reporters months later.

It’s also not the first time Trump has talked about himself in the third person, but Rowling ran with that detail as she created new words to respond to him in what’s being called “Trumpish.” It’s almost like a children’s story in the making.

I wonder whether Trump talks to Trumpself in the third Trumperson when Trump's alone. https://t.co/8CEzVTJjBq

She wasn’t the only person to indulge in some Trump-inspired wordplay as others attempted to make some new Trump words on their own.

Trumpdiculous, Trump talks perfect Trumpish when around other Human Trumples

Making art of Trump words isn’t as easy as it looks, however.

Trumpdiculous, Trump talks perfect Trumpish when around other Human Trumples

How soon before we get a Trumpish dictionary?