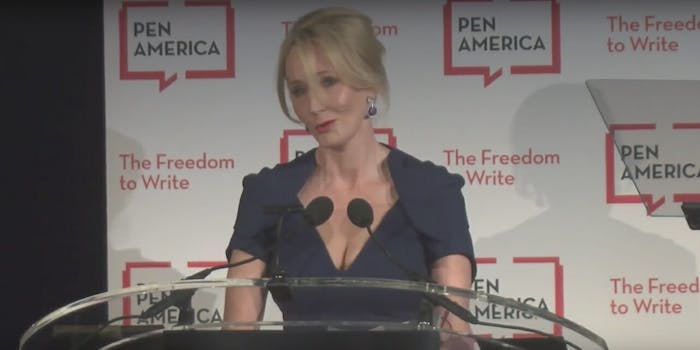 J.K. Rowling rep reassures fans that she ‘liked’ a transphobic tweet by accident

J.K. Rowling's representatives said it was a mistake.

When J.K. Rowling “liked” a transphobic tweet on Wednesday, it didn’t take long for fans to notice. With over 14 million followers, there’s constant scrutiny over new tweets about Harry Potter—and about Rowling’s political values. The latter became especially contentious in recent years, as Rowling weighed in on controversial topics like U.S. President Donald Trump and Scottish independence, and expressed her support for alleged domestic abuser Johnny Depp.

The tweet in question came from a relatively obscure account, characterizing transgender women as “men in dresses.” It went viral after transgender journalist Shon Faye posted a screencap, with fans reacting in horror to this apparent endorsement of transphobia.

Thanks to Twitter’s habit of sharing a user’s liked tweets with their followers, the tweet kept showing up in people’s feeds. For some, it seemed like confirmation that Rowling was adopting a more conservative mindset, fitting the growing criticism that she focuses her work on straight, white characters. They worried Rowling could be joining the ranks of prominent British “feminists” who espouse transphobic viewpoints.

Responding to the backlash, Rowling’s representatives blamed the tweet on an accidental slip of the thumb. “I’m afraid J.K. Rowling had a clumsy and middle-aged moment,” they told PinkNews. “This is not the first time she has favourited by holding her phone incorrectly.”

It’s very easy to accidentally click the like button, and since the original tweet was about Labour politics, you can see how it would end up on Rowling’s timeline. This explanation may not convince everyone, however, because something similar happened before. Last year, she liked a transphobic article concerning the same intersection between British leftist politics and trans-exclusionary feminism. One accidental click is a simple mistake, but some fans see two as a more suspicious coincidence.

They may not be convinced otherwise unless Rowling comes forward to actively speak out in support of the trans community—something she hasn’t really done before, beyond general statements of support for LGBT fans.