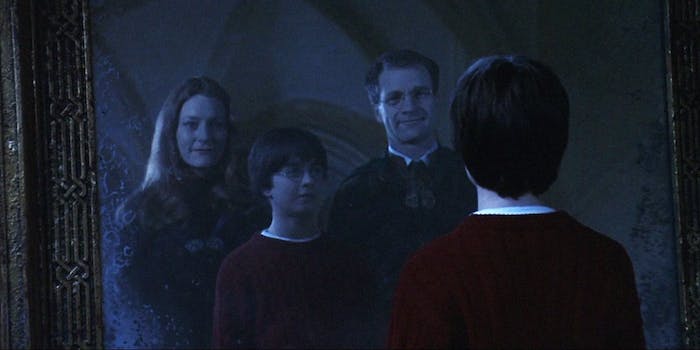 Screengrab via Harry Potter and the Sorcerer's Stone

Don't be fooled by this viral 'revelation.'

Much of that comes from Pottermore, an official Harry Potter website from J.K. Rowling that has the latest news on the books, the play, and the Fantastic Beasts films. But it also has a wealth of background information for fans to explore—including one nugget on Harry’s family that some believed was entirely new information.

Several sites reported this week that Rowling had confirmed that there were actually two Harry Potters in the series. No, we’re not talking secret clones or Horcruxes, but rather the existence of another character named Harry Potter.

The reveal can be found within a Pottermore page that chronicles the centuries-long history of the Potter family. It covered how the Potters inherited Ignotus Peverell’s Invisibility Cloak (one of the Deathly Hallows) and how they amassed their fortune over the centuries, which was quadrupled after Harry’s grandfather invented Sleekeazy’s Hair Potion (aka what Hermione Granger used to tame her hair for the Yule Ball). But it also reveals that—prior to Harry’s fateful meeting with Voldemort in 1981—how little the Potters were involved with the greater wizarding world.

One of the exceptions was Harry’s great-grandfather Henry Potter. Henry served on the Wizengamot—a high wizarding court of law—and he publicly criticized the Minister of Magic after the Minister forbade wizards and witches from aiding Muggles during World War I. To many close to him, Henry went by Harry. (Harry is a nickname for Henry, which we’ve seen most famously with Prince Harry.)

It’s a pretty neat nod and it shows a strong suggestion of how our Harry Potter got his name. Like many children—and later his own kids—Harry was probably named by his parents after a special relative. There’s one slight issue with the hype over this revelation: We’ve known about the first Harry for nearly two years.

Pottermore first published Harry’s family history as part of its relaunch in September 2015, which turned Pottermore from an interactive exploration of the Harry Potter series to more of a traditional (and official) web encyclopedia. The Internet Archive Wayback Machine first captured the post on Sept. 22, 2015. Pottermore even tweeted about it at the time.

The Henry/Harry connection was there in its first iteration, but it didn’t go as viral back then as it has now. Some of the other connections, threads, and the revelations—including that Harry’s grandfather was named Fleamont Potter—may have gotten more notice. But Pottermore entries don’t have dates attached to them, so it was easy for some fans to assume these details had just surfaced.

The earliest posting I could find on the new wave of “news” came from the site JustJaredJr., which wrote about the “two Harry Potters” connection on June 18 and said that Rowling revealed it “on Pottermore this week” with no indication of exactly when it had gone up. Other sites soon followed course, calling it “one of Rowling’s latest posts” and “a recent Pottermore entry.”

And Harry isn’t the only character whose name is used a second time on a family tree: the Malfoys have one too. First captured in January 2016, fans learned the first Lucius Malfoy lived during the 16th century and was among those who tried to marry Queen Elizabeth I. According to rumor, Lucius placed a jinx on Queen Elizabeth after being rejected so that she would always be opposed to marriage. The Lucius Malfoy we know as Draco’s dad hasn’t cursed any queens, but he’s still a rather slippery character at his peak.

And Harry, just like his probable namesake, stood up for the Muggle community—albeit on a much larger, global scale.