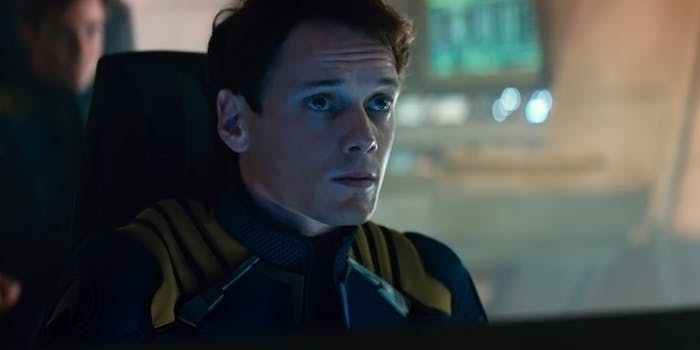 'I can’t possibly imagine that.'

Star Trek Beyond is hitting theaters this week and with a fourth film officially announced, some fans wondered what Star Trek will do with Pavel Chekov after Anton Yelchin’s sudden death last month. While the exact plan might still be up in the air, we do know one thing: He won’t be replaced.

In an interview with the Toronto Sun, producer J.J. Abrams—who directed Yelchin in the first two Star Trek reboot films—nixed the idea of recasting another actor as Chekov in future Star Trek films.

“I would say there’s no replacing him,” Abrams said. “There’s no recasting. I can’t possibly imagine that, and I think Anton deserves better.”

Chekov is a key crew member of the U.S.S. Enterprise, and according to the Toronto Sun, the character received the most amount of screentime to date in Beyond. His role in the films so far has largely been that of comic relief as the stories focused on Kirk, Spock, Bones, Scotty, and Uhura.

For now it’s unclear just how Star Trek will handle Yelchin’s death. Abrams said that he’s thought about killing off Chekov, although “it’s too early to talk about it.” But it’s something the film has tackled before with another beloved actor in the film. Star Trek Beyond includes a nod to original Spock Leonard Nimoy, who died last year, within the plot itself.