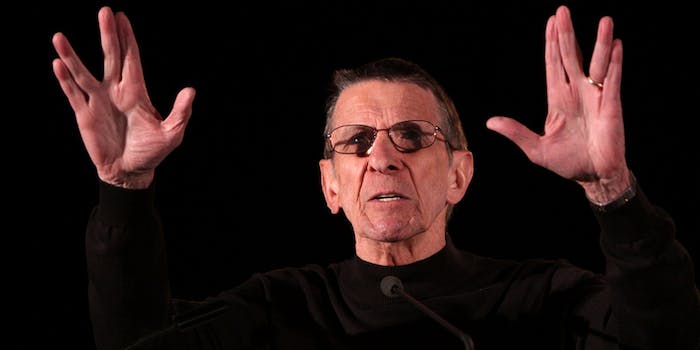 He died at his home on Friday.

Leonard Nimoy, the man who won over generations of nerdy hearts as the emotionless, logical, half-human-half-Vulcan alien Spock on Star Trek, died on Friday according to The New York Times. Nimoy’s wife told the Times that the death was caused by “end-stage chronic obstructive pulmonary disease.” He had been admitted to the hospital earlier this week with chest pains.

Outside of acting Nimoy was involved in a number of endeavors like photography, but it was his role as Spock that would earn him the most fame and recognition. He often interacted with fans and was especially active on Twitter where he would sign off his tweets with LLAP, an abbreviation for his characters classic phrase “live long and prosper.” His last tweet was Feb. 23.

A life is like a garden. Perfect moments can be had, but not preserved, except in memory. LLAP

At the news of his passing, fans and friends immediately took to Twitter and Facebook to express their sadness at the loss of the actor.

RIP Leonard Nimoy! Live long and prosper, Spock. You will be missed.

Rest in Peace, Leonard Nimoy
Live long and in prosper, wherever you now are, Mr. #Spock

my heart is broken. i love you profoundly my dear friend. and i will miss you everyday. may flights… https://t.co/WPJmt1X4ox

"I loved him like a brother. We will all miss his humor, his talent, and his capacity to love."