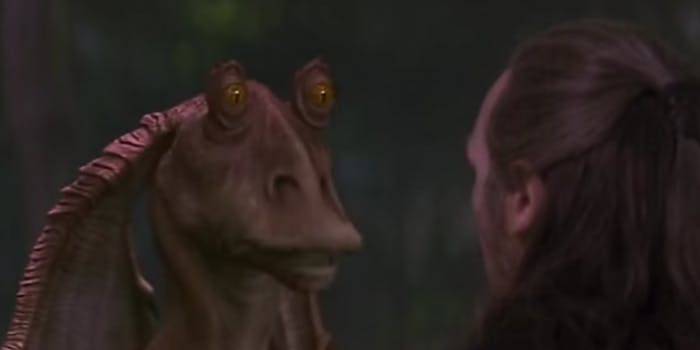 Jar Jar Binks is back and everyone wants to know why

The senator from Naboo is getting another shot at the limelight.

Star Wars’ Jar Jar Binks took the internet by storm on Monday, and no one could really figure out why.

The Gungan senator from Naboo is getting another shot at the limelight 20 years after he made his (controversial) appearance in Star Wars: The Phantom Menace.

Jar Jar Binks is trending. Nobody seems to know why. I'm okay with this. pic.twitter.com/8lw4jOlAYo

Amidst all the mystery, Jar Jar Binks continued to be a trending topic–but only because everyone continued asking why Jar Jar Binks was trending. The internet can be funny like that.

Everyone trying to find out why Jar Jar Binks is trending, is the most Jar Jar Binks reason to be trending pic.twitter.com/3WJMmcnDBS

Twitter users were happy to find out the senator was safe and used the opportunity to show him some love.

Jar Jar Binks trending and I instantly think he died. Super relieved to find he’s ok and this is just another random trend. pic.twitter.com/2nMhqI5ZLV

since my bby jar jar binks is trending let me introduce you to a meme I made when I was 15 pic.twitter.com/rK4AMk98bG

Others were not so happy with Jar Jar Binks’ return.

Saw Jar Jar Binks was trending & expected to see an apology from George Lucas for ever creating the character. pic.twitter.com/JgbWv10iuK

Then, there were those who chose to bring up the Sith Lord conspiracy.

Will "Jar Jar Binks" finally be revealed as a Sith Lord? pic.twitter.com/Gm33uEDVJA

As it turns out, Jar Jar Binks’ return can be traced back to a Star Wars-themed graphic shared on Twitter. The graphic most likely gained popularity after being shared by Mark Hamill a.k.a Jedi Master Luke Skywalker.