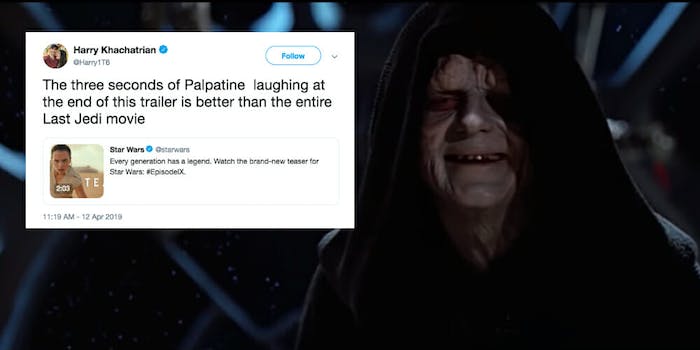 'No one's ever really gone.'

After the first trailer for the highly anticipated Star Wars IX: The Rise of Skywalker was released, Star Wars aficionados were surprised to hear that Palpatine might be back.

At the 1:47 mark in the trailer, you can hear Emperor Palpatine’s sinister cackle.

Preceding the laugh is a voiceover of Luke Skywalker saying, “No one’s ever really gone.”

The three seconds of Palpatine laughing at the end of this trailer is better than the entire Last Jedi movie https://t.co/IF4raoPtds

In Return of the Jedi, the villain was thought to be killed by Darth Vader. This new development has many fans understandably shook.

Everyone: pAlPaTiNe Is GoNe

*Hears Palpatine laugh at the end of the Star Wars teaser* pic.twitter.com/FVurAi0RW3

star wars twitter after the #episodeix title and teaser reveal but with palpatine: pic.twitter.com/l9zXZyoIz1

It’s likely that Ian McDiarmid will reprise the role of the antagonist after playing the character in the last two trilogies. McDiarmid was also seen at a panel for the film on Friday, fueling Palpatine comeback speculation.