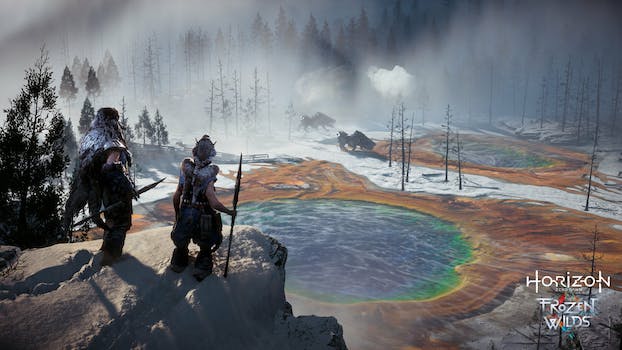 Explore a snowy wasteland in this exceptional DLC.

This year has been full of amazing games, and Horizon Zero Dawn hit as one of the very first. Guerilla Games brought the open world rich with science-fiction to PlayStation 4 owners in February, and it stands as one of the most gorgeous games ever made. With a unique reliance on bows and staves, Horizon emphasized a tactical, careful approach to action RPG combat. Rather than mindless slashing, players stepped into the role of a hunter, using traps and wires to take down robotic prey.

The adventure for Aloy, the game’s protagonist, was steeped in mystery and left many hanging threads by the time credits rolled. The Frozen Wilds, available this week, picks up in a changed world and explores an underdeveloped part of its lore. While this expansion plays just like more Horizon Zero Dawn, it serves as an intriguing, poignant show of the universe’s potential future.

Removed from the apocalyptic melodrama of the main game, this standalone story picks up with Aloy answering a local call for help. She goes to investigate the Banuk, settled farther north than we’ve seen before. The Banuk are the game’s most nomadic tribe. They had little to do in the overall story, aside from showing how some worship the hostile machines as deities. Even in small moments, the narrative here is dedicated to exploring the dynamics of Banuk social hierarchy.

This expansion is set in The Cut, a snowy, mountainous region of the Ban-Ur expanse. Machines and wildlife still roam freely, but the Banuk live alongside them. There are rituals to appease the Stormbirds, and shamans communicate with the ravaged land. The tribalism of these people initially proves a challenge, but Aloy is able to prove herself for acceptance.

As an outsider, she learns about Banuk culture alongside the player. The Frozen Wilds focuses entirely on the Banuk, fleshing them out more than any of the other groups. Even small talk with merchants and traders reveals new quirks of daily life in The Cut and adds to the realism of Horizon’s post-apocalyptic world. Harmony defines Banuk life, both with nature and other tribes. Roaming groups of hunters called Weraks establish their own independence, but still adhere to the life of larger settlements.

Banuk culture makes The Frozen Wilds an interesting location to inhabit for the six or seven hours it lasts. The snow-capped mountains and dormant volcanoes are stunning to behold, and the few new robot enemies are fantastic additions from a gameplay perspective. Beyond those additions, the story is the star.

What starts as an investigation into missing hunters becomes an assault on a mountain fortress known as Thunder’s Drum. But a personal, intimate conflict lies at the heart of the action, and works due to stellar voice acting and motion capture. Aloy continues to be one of gaming’s best modern heroines, and a brother/sister duo that accompany her rise to be two of the most compelling characters in the game. Free of the narrative weight from the main questline, The Frozen Wilds feels like a slice of life witnessed through the lens of an outsider, and it excels on a much smaller scale.

Though the map is littered with objectives to clear and collectibles to find, none of it would matter if the player wasn’t driven to explore. Horizon‘s greatest strength was creating a believable, interesting world and The Frozen Wilds only adds more.

There are added Hunting Trials, hidden artifacts, and voice memos to find in the new corner of the map. If there’s a problem with this expansion, it’s that it doesn’t add much players haven’t seen before. The handful of new machines are tough to take down, including the hardest boss yet. But a reliance on matching puzzles and timed platforming make some of the adventure grow tedious. Horizon Zero Dawn had a problem with repetition, and The Frozen Wilds doesn’t make any progress on that front.

Still, one of the year’s best games is now better. Fans who cleared the main story will want to come back and finish this narrative, as well as power up Aloy. This is true post-game content, with high-level enemies and worthwhile rewards. The Frozen Wilds is a perfect excuse to spend just a few hours more in Horizon Zero Dawn‘s world, and to realize all that makes it a truly great game.

Horizon Zero Dawn: The Frozen Wilds is available for PlayStation 4 on Nov. 7.