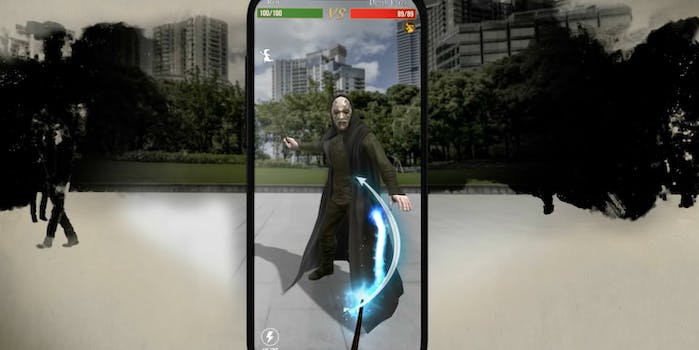 Here's what every new wizard needs to know.

The latest sensation from Pokémon Go creator Niantic is here, with a franchise that certainly rivals the yellow mouse for cultural dominance. Harry Potter: Wizards Unite is another location-based augmented reality mobile phone game that encourages you to run around your community and accomplish tasks, collect items, and battle creatures, just with a wizarding twist. That said, it’s not exactly the same experience, so here’s what you need to know before diving in.

Let’s get one thing clear. While some people are calling Wizards Unite “Harry Potter Go,” Harry Potter Wizards Unite is considerably more complicated than Pokémon Go, Niantic’s biggest mobile game—and that probably isn’t a good thing. While the general structure of Pokémon Go is familiar enough to anyone who’s played a Pokémon game before (walk around, find animals, catch them, and fight for dominance in regional gyms), implanting that formula into the Harry Potter universe comes with some peculiar challenges.

Wizards Unite: Tips on how to play

So how do you play Harry Potter: Wizards Unite?

The general setup is that Voldemort and his bottomless clown car of dark wizards have mucked things up, and the world is now full of magical artifacts, creatures, and villains that need collecting. As a freshman member of the Ministry of Magic, of course it’s up to you to do that through wizarding battles, item collection, and even bigger wizarding battles.

In short, you’re going out and battling creatures and enemies to collect what is basically a scrapbook of people, creatures, and things (referred to in-game as “Foundables” or “Confoundables”), and return them to their rightful place in the wizarding world. A Confoundable is basically just a malicious bit of magic that’s trapping a Foundable, like an iceberg trapping a Hogwarts student in its cold clutches.

Wizards Unite is pretty good about leading through a narrated tutorial, with characters like Harry Potter himself introducing you to concepts you’ll need to remember as you play. Unfortunately, it’s kind of an info dump. So let’s parse through some things. Here’s the general flow of gameplay, but we break most of these down further below.

In Pokémon Go, you were just another trainer, but in Wizards Unite, you’re a little more involved in the plot, and that means some nifty personalization. Each player gets an ID card that they can use to show off their level, a title you earn from completing goals, your Hogwarts house, a customizable wand, and a whole bunch of game stats. Not bad. Play around with the photo part. You can customize your selfie with some fun stickers and even AR clothes!

The biggest quantifiable difference with Wizards Unite vs. Pokémon Go is what you’re doing while walking around, at least on a thematic level.

In your registry page, you’ll find that aforementioned scrapbook of things to collect, and they’re all sorted into different categories.

You can tell what kind of Foundable you’re approaching while walking around by the icon’s logo and color. Use these to figure out where you want to walk so you’re not wasting time and magical energy, which depletes the more you use it.

Every battle you encounter with a Foundable/Confoundable or during a Fortress raid will largely go the same way. During a Foundable/Confoundable battle, you’ll have to align your camera with Confoundable (unless you disable this in the settings), then you’ll be prompted to trace a spell with your finger. Do that quickly and accurately enough, and you’ll defeat the creature. It may take multiple spells though, so if the enemy attacks you, you’ll have to cast “Protego” by following an additional spell tracing prompt. If you notice your health or energy dropping to a dangerous level, you can click on the nearby potions icon to momentarily pause the battle and down a drink.

It’s worth noting that Wizards Unite can be a little picky when it comes to the accuracy of your spell tracing, so take a few moments to learn the basic shapes during battles and get some practice in.

Speaking of energy: As in Pokémon Go, your magical energy in the Harry Potter app is going to run out if you play too much. That is, if you don’t recharge at the right locations.

“Inns” are essentially Pokéstops, and they’ll provide you with a random amount of energy that allows you to engage in more battles to collect more items. Sometimes you’ll get only a small burst of energy (maybe 5), and other times you’ll get upwards of eight to 10, in my experience anyway. Starting out, your maximum energy pool will be at 75, so you can definitely go for an hour or two without trouble, but take every chance you can to stock up. It’s even better if an inn is actually a place you can hang out for a while, like a fast food restaurant or something, because you can get a fresh, randomly sized burst every five minutes. If another player just used that inn, don’t worry. Other players won’t impact your experience outside of fortress raids, which we get into below.

You can also look at the map (it’s the default screen. If you’re in one of the many menus, just hit the X at the bottom of the screen until you’re backed out to the map) to see which inns are emitting smoke from their chimney. If there’s smoke, that means that inn was used too recently. You’ll have to wait five minutes before you can use it again. This definitely has its advantages if you live or work near enough to an inn.

Greenhouses are where you can get significant quantities of potion ingredients, which we’ll dive into below.

Potions, like the candy you fed your pokémon, are how you’ll keep yourself alive in battles—and especially raids. You can also expedite some experience points and mission goals by drinking a potion or two. You can make potions by assembling certain ingredients you pick up by doing tasks, fighting, all the usual running about stuff. You’ll notice tiny items littered about. Most of those are ingredients you should collect.

Potions take time to fully form, however, so make sure you’re starting them as soon as possible so you’re not wasting time. Every potion has a different time amount it requires to brew, so plan accordingly. You’ll unlock the ability to brew additional potion types as you level up, starting out with basic energy and health potions to keep you going during battles, and later earning some XP boosting spells. Your favorite kind will likely depend on what you like to do more in the game. Definitely invest in potions that reduce the distance you need to unlock the valuable portkeys.

Portkeys are where Wizards Unite gets interesting. They’re the Harry Potter version of Pokémon eggs. Collect a portkey from a portmanteau (basically a pointy treasure chest laying around in the world map), and then use either a gold or silver key to unlock it, but you’re not done yet. You’re then required to walk 2, 5, or 10 kilometers to open it.

Then, once you’ve unlocked the portkey, the game uses its AR tech to animate a giant portal to another location somewhere in the wizarding world. Quite frankly, they’re wonderfully detailed. You’re going there to collect little spirits called wrackspurts and collect a large amount of reward items.

This is, in this humble writer’s opinion, the coolest part of Wizards Unite, and arguably the most unique way Niantic has leveraged the Harry Potter franchise.

Once you’re comfortable with using spell tracings, go ahead and try out a fortress (solo or with a friend). Walk up to a fortress on the map (the tallest type of buildings), tap it, and use a rune stone to initiate a fortress challenge in the menu.

How do you get rune stones?

You’ll need a rune stone to get in, which you find by locating those Foundables/Confoundables. Collect enough and rank up in one of the many categories of Foundables, and you’ll earn a chest you can open up that gives you rune stones and other rewards.

The level displayed on a rune stone will determine how tough the fortress raid you’re about to do will be. Early on, you’ll likely just get level one or level two stones, so a solo player shouldn’t have much trouble.

You should have a reasonable number of potions to replenish your health in case an enemy whittles you down during a fight. Keep in mind that your health doesn’t reset between enemies while in the fortress, so use those potions. Every time an enemy strikes, you’re guaranteed to take damage. How much depends on how well you trace your protection spells.

Odds are there will be multiple enemies to defeat. So plan accordingly, and remember that you will have only about five minutes to finish the challenge, so don’t dawdle. You can always find a timer at the top of the screen during battle.

Wizards Unite: How to add friends

Everyone knows that these kinds of games are a little more fun when you can hang out with your crew. To add a wizarding friend in Wizards Unite, you’ll first need to be on the map screen like normal. Then click the icon on the lower left that has two wizards on it. You’ll be taken to the “Add Friend” page, where you’ll see your 12-digit “friend code” listed. Give that number to a friend, or enter your friend’s number into the box below on the screen. You can also share your friend number to social media by clicking the share button or by copying your friend code to your phone’s clipboard by clicking “copy” before posting it anywhere you like.