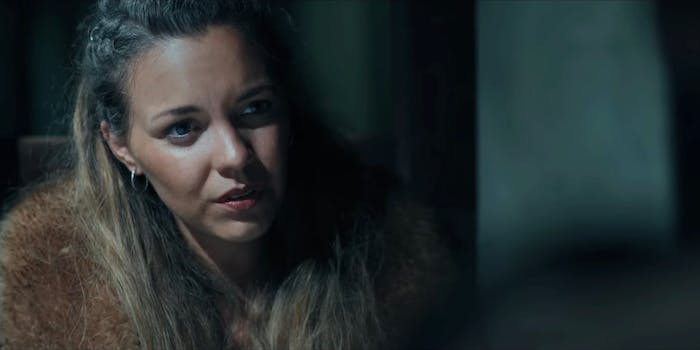 It is really a Harry Potter story without Polyjuice Potion or a disguise?

It happens a lot.

On Jan. 13, Tryangle Films released its long-awaited (and unofficial) Harry Potter fan film, Voldemort: Origins of the Heir, on YouTube to much fanfare. It aimed to dive into Lord Voldemort’s backstory and explore what led Tom Riddle to become a dark wizard whose very name was feared. But in the process, it leaned on a very familiar plot device we’ve seen play out numerous times in Harry’s world.

Voldemort’s backstory is told in flashbacks by Heir of Gryffindor Grisha McLaggen. She’s under control of the truth potion Veritaserum while being questioned by a Soviet Auror who caught her trying to steal Tom Riddle’s diary. The film is 52 minutes long and, thanks to an agreement between Tryangle Films and Warner Bros., free for anyone to view on YouTube.

The fan film revealed that Voldemort, then going by Tom Riddle, was fairly open about the fact that he was the Heir of Slytherin when McLaggen and two other former Hogwarts students hung out together. It even suggested a more sinister version of events behind the murder of Hepzibah Smith, Helga Hufflepuff’s descendant, who had Hufflepuff’s cup and Salazar Slytherin’s locket in her possession. The locket belonged to Voldemort’s mother, Merope Gaunt, before she sold it at Borgin and Burkes.

Much of the story may leave audiences wondering just how McLaggen, even as an Auror, knows so much about Voldemort when it took Albus Dumbledore years to figure it out with help from his many sources and Harry himself. But the final minutes of the film explain: McLaggen knows because she was actually Voldemort the entire time. With his disguise revealed, Voldemort kills several Soviet Aurors and takes back Tom Riddle’s diary—and his first Horcrux—that he’ll eventually give to Lucius Malfoy for safe-keeping.

The reception of Voldemort: Origins of the Heir, which initially excited fans looking for more Harry Potter, has been mixed. The origin story created in the film is fascinating, even if it doesn’t always work. The effects aren’t overly cheesy and echo what we’ve seen in the movies, although the use of other magical props such as Veritaserum aren’t accurate to what we know. You don’t need an IV’s worth of potion for it to work. Even though Voldemort: Origins of the Heir is not canon and had to display explicit messages about how Warner Bros. and J.K. Rowling didn’t endorse the project, it embraces a tiring crutch we’ve seen in many Harry Potter stories: plots and twists revolving around a character in disguise.

Spywork and deceit, of course, go hand in hand in Harry Potter. Both the Order of the Phoenix and Voldemort’s Death Eaters used it both times Voldemort rose to power, with Dumbledore employing Severus Snape as a double-agent near the top of Voldemort’s ranks. Harry wants to become an Auror, a career that practically requires it. Nymphadora Tonks, as a Metamorphmagus, could change her appearance at will. Everyone else, however, had to use a spell or potion to do it. And they did—a lot.

In fact, it’s a factor in most of the Harry Potter series and the canonical plays and movies that take place in Harry’s world. Polyjuice Potion, an advanced potion that will transform a witch or wizard into another for exactly one hour, is used in four of the seven books in the Harry Potter series and the two-part play Harry Potter and the Cursed Child. For most of those books, Polyjuice Potion was an essential part of a plot or played a role in a book’s big twist.

If you add in disguising oneself with magic, you can also include Fantastic Beasts and Where to Find Them. And if you really want to be nitpicky, you could argue that Sorcerer’s Stone and Prisoner of Azkaban also invoke a form of this with Voldemort possessing Professor Quirrell for close to a year and Peter Pettigrew spending 12 years as the Weasleys’ pet rat before he escaped capture and returned to Voldemort’s side.

Polyjuice Potion is first introduced in Chamber of Secrets as a way for Harry, Ron Weasley, and Hermione Granger to find out what Draco Malfoy knows about the chamber and Slytherin’s heir.

Chamber of Secrets takes great lengths to show just how much time and effort it takes to successfully brew such a potion. The ingredients required Hermione to steal several rare items from Snape’s private stores, pick fluxweed at the full moon, and stew lacewings for 21 days. The trio even had to sneak into a mostly abandoned girls’ bathroom to brew it.

At best, it takes a month to make. Fortunately for Ron and Harry, Hermione is brilliant enough of a witch to successfully make the potion in time to interrogate Malfoy on Christmas night, but it didn’t come without a hitch: Hermione accidentally put cat hair in her cup of Polyjuice Potion.

Two books later in Goblet of Fire, Polyjuice Potion is more in the background but even a bigger plot point, albeit one we only learn about toward the end.

After Harry witnessed Voldemort’s return and escaped the graveyard, Mad-Eye Moody took him away and prepared to kill him. Dumbledore stopped Moody in time, only to reveal that Harry had never met the real Mad-Eye Moody: The person he thought he knew was actually Barty Crouch Jr., who had been impersonating Moody for the better part of a year to orchestrate Harry’s trip to the graveyard.

Under the influence of Veritaserum—three drops is all it took—Crouch revealed how his mother replaced him in his cell in Azkaban and used Polyjuice Potion to keep up the charade until her death. He also revealed how he captured Moody, kept him under control, and used Moody’s hair and Snape’s supplies to make Polyjuice Potion.

The reason the disguise worked so well, according to Dumbledore, is due to Moody’s paranoia about drinking from glasses and flasks other than his own. “You see the simplicity of it and the brilliance,” Dumbledore noted.

Its appearance in Half-Blood Prince is far briefer and more of an afterthought than anything. Professor Slughorn showed the Advanced Potions class a batch of it in Half-Blood Prince, which Malfoy stole to make Crabbe and Goyle disguise themselves and keep guard while he tried to fix the Vanishing Cabinet that would allow Death Eaters to infiltrate Hogwarts. They hung outside the Room of Requirement, and when someone like Harry, Ron, and Hermione approached that hallway they would drop whatever they were holding so Malfoy would know it wasn’t safe outside the room.

By the time we reach Deathly Hallows, it’s part of three separate plots. The Order of the Phoenix uses it to transform Ron, Hermione, the Weasley twins, Fleur Delacour, and Mundungus Fletcher into Harry so that the Death Eaters can’t figure out which one is the real Harry. The plan was believed to be Fletcher’s, but in reality, Snape suggested it to him after confunding him. To keep his cover, Snape told Voldemort what the Order had planned, resulting in George Weasley losing an ear and Mad-Eye Moody’s death.

Hermione later smuggled Mad-Eye’s supply of Polyjuice Potion when the trio set off to hunt Horcruxes, which allowed them to impersonate Ministry of Magic employees to obtain the locket Horcrux. The plan mostly works, but it’s an extremely flawed one that goes off the rails as they try to rescue a woman about to be handed over to Death Eaters for being a Muggle-born witch. Their escape isn’t pretty (and results in Ron splinching), but it works—and they got the Horcrux.

Toward the end of the book, Hermione transforms into Bellatrix Lestrange with Polyjuice Potion to access Bellatrix’s Gringotts vault, where Helga Hufflepuff’s cup resides. Ron is disguised with wand magic, while Harry hides under his Invisibility Cloak. They pull it off, at least until the Thief’s Downfall washes away their disguises. And in another instance, Hermione disfigures Harry’s face with a jinx so that he won’t be instantly recognized when the trio is captured by Snatchers.

Albus Potter, Scorpius Malfoy, and Delphi use Polyjuice Potion impersonate Ron, Harry, and Hermione so they can obtain a Time-Turner that can transport its users more than five hours in the past, a ploy that fools even Hermione. And the big reveal of Fantastic Beasts relies on Gellert Grindelwald disguising himself as Percival Graves with magic, which is only broken with a Revelio Charm from Newt Scamander.

Polyjuice Potion and concealment charms have helped heroes and villains alike for years with varying degrees of success. But they’ve become something of an overused plot device in Harry Potter stories, one that Voldemort: Origins of the Heir embraces. The Harry Potter books, movies, and play are vastly different from each other, but their use of magical disguises means we don’t get more interesting solutions to plot twists. Perhaps future Fantastic Beasts films can eventually escape this convenient writing tactic.

Granted, even Voldemort used a disguise in his early days. Not one with Polyjuice Potion or magic, but playing on people’s belief that Tom Riddle was just a brilliant Hogwarts student who could’ve had any job he wanted, but instead chose to work at Borgin and Burkes. It was under this guise that he murdered Hepzibah Smith to make one of his many Horcruxes. Later in life, Voldemort shed his cover as Tom Riddle to show his true colors in the open. By the time “Grisha McLaggen” is interrogated in the fan film, Voldemort has embraced his name, so it’s less clear why he would subject himself to questioning via Veritaserum.

Voldemort delegated the task of terrorizing the Wizarding World to his Death Eaters when he could, but when it came to something of importance, whether it was dealing with the Potters, killing Harry, or protecting his remaining Horcruxes, he’d do it himself. He had enough ego and pride in his abilities that he probably would never use a disguise.