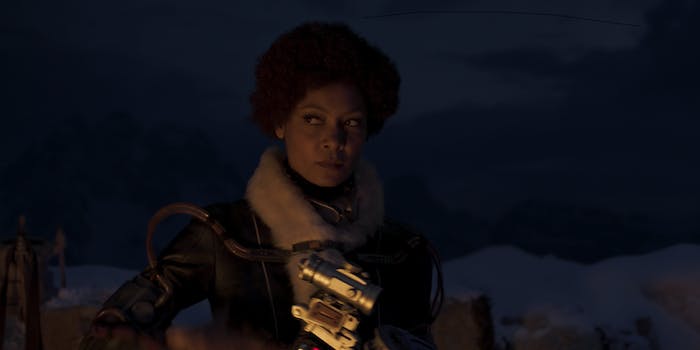 Fans are speculating that she's secretly Han's ex-wife from the comics.

After seeing Thandie Newton in the trailer for Solo: A Star Wars Story, a lot of fans are wondering if she’s playing Han Solo’s wife.

Why? Because Han’s wife in the comics is a black woman, and Newton (Westworld, Crash)… is also a black woman. Yes, this is an awkward sequel to when some people theorized that Finn was related to Mace Windu. And as it turns out, there’s more than one black woman in the Star Wars universe.

Han’s wife, Sana Starros, arrived in Marvel‘s main Star Wars comic in 2015, meaning she’s an official part of Star Wars canon. Their “marriage” is as dubious as you’d expect from a scoundrel like Han, because it was actually part of a scam. It was more like a partnership between likeminded criminals, ending badly when Han stole Sana’s share of the profits. So if you’re concerned about competition for Han’s classic love story with Leia, you don’t have anything to worry about. Sana Starros may even be gay, judging by a later comic that implies she dated the fan-favorite character Dr. Aphra.

So far, there’s no indication that Newton’s character is Sana Starros. Disney announced her name as “Val,” and while names can be deceiving (remember the John Harrison/Khan situation with Star Trek Into Darkness?), there are other reasons why this is unlikely.

First of all, the movies generally avoid using characters from the comics and tie-in books. Then, there’s Newton’s age. Sana Starros seems to be around the same age as Han Solo in the comics, meaning she’s in her late 20s or early 30s. Thandie Newton is 45, more than 20 years older than Han in Solo: A Star Wars Story. Oh, and she doesn’t actually look like Sana.

We don’t know much about the new Solo characters yet, but Val seems to be part of the criminal crew led by Beckett (Woody Harrelson). If we follow the classic framework for a heist movie, that means she’ll have a specific job on the team. Han is surely the getaway driver, but what about Val, Q’ira (Emilia Clarke) and the others? Considering Val’s great big gun, she could be the muscle.