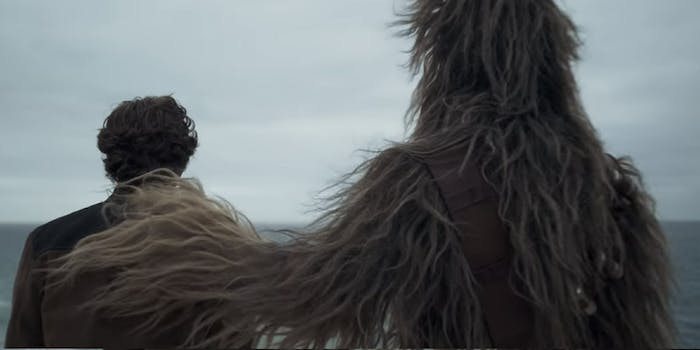 The long-awaited trailer gives us our first look at young Han, Lando, and Chewie.

After airing a brief teaser during the Super Bowl, Disney just released the full-length trailer for Solo: A Star Wars Story.

The Han Solo movie stars Alden Ehrenreich, joined by Woody Harrelson as the leader of an Ocean’s Eleven-style team including Kira (Game of Thrones‘ Emilia Clarke) and Lando Calrissian (Donald Glover). With glitzy costumes and a comedic tone, this is definitely a (very appropriate) departure from Rogue One, the first Star Wars spinoff. And at long last, we get our first real look at Alden Ehrenreih’s version of Han, who still has that untrustworthy charm without seeming like too much of a Harrison Ford impression.

Interestingly, this trailer doesn’t answer the most hotly contested question about the movie: Will Han be the dorky loser we met in the Original Trilogy, or will he be the charismatic antihero that many fans imagine? It’s impossible to tell from these short clips, but at least there’s one thing we can all agree on: Lando looks awesome.

Solo: A Star Wars Story arrives on May 25.