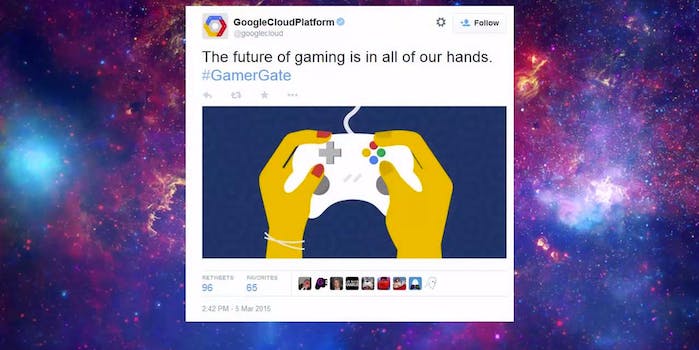 Google apologizes after accidentally tweeting that it supports Gamergate

It's about ethics in tweeting.

Does Google support the toxic sexism of Gamergate? Yes—or so the company claimed Thursday night in a tweet that it almost immediately retracted.

Gamergate, the vicious anti-feminist subculture war that consumed much of the Internet last fall and resulted in a mass-shooting threat at a public university, has thankfully subsided from the public spotlight. But last night’s tweet, sent from the official Google Cloud Twitter account, may have been an attempt to reclaim widespread attention by commandeering an enormous weapon—the behemoth that is Google’s Internet presence.

The International Business Times caught a screengrab of the now-deleted tweet, which went up at 8:15pm EST.

Gamergaters immediately welcomed the tweet as the rest of the Internet recoiled in horror. YouTube vlogger and Gamergate supporter Queenymartha said she considered the tweet “a very nice” message.

“It’s what Gamergate has been advocating all this time, which is diversity and transparency and inclusion,” she said.

To those outside of Gamergate, the message represented the complete opposite of diversity.

Gamergate was founded and orchestrated largely by the white male denizens of communities like 4chan, 8chan, and Reddit‘s r/KotakuInAction. Gamergate has been characterized since its inception by death and rape threats, the doxing of women and other feminists, and even swatting, the practice of reporting false emergencies in order to trick police into sending SWAT teams to people’s houses.

Because Gamergate’s tactics usually involve a rhetoric of honesty, integrity, and speaking out against bullying, many companies unwittingly issued statements of support for it before realizing that it did not stand for the principles it claimed to embrace. The list of companies that have made such blunders includes Intel, Adobe, Firefox, Mercedes-Benz, and even Gawker.

Google, however, quickly shut down rumors that it was supporting the movement. The tweet disappeared not long after it went up, and the Google Cloud account issued a retraction.

Our last tweet was a mistake. Google supports an open, diverse gaming community for all. We do not support #GamerGate.