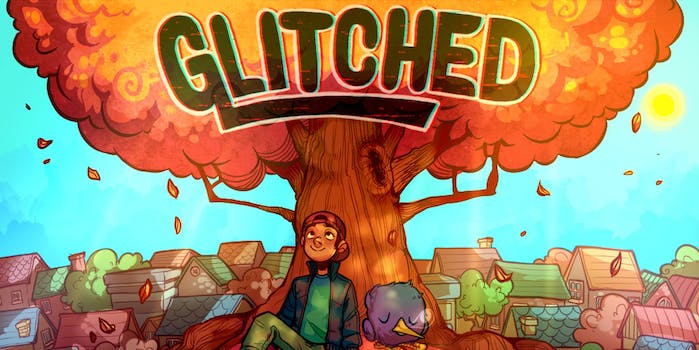 Behind ‘Glitched,’ an old-school style RPG that breaks the fourth wall

A beloved, classic style of gaming is getting a modern update.

Classic Japanese RPGs have such a familiar formula that experienced gamers hardly need to glance at the tutorial to know how to play. You travel from one charming town to another, talk to people to learn new information, explore dungeons, fight bosses 10 times your size. In the 30 years since Dragon Quest pioneered the genre, the charm of these games always seems to comfort and welcome us.

But the formula, like all classic art, invites innovation and change. That’s what the folks behind En House Studios’ upcoming RPG Glitched had in mind when they started playing around with the idea of creating a game that would break the fourth wall.

“Nikko, our programmer, created a program in one of his [high school] classes where a character on screen would respond to you based on what your input was,” Justin Hilton, one of Glitched‘s three designers, told the Daily Dot. “He thought it would be cool if we had a game when the player talks to you and is aware of you.”

Their idea eventually yielded Glitched, which tells the story of Gus, a young man that will be our protagonist. When a crack appears in the fabric of Soren, the world he inhabits, and swallows one of his dear friends whole, he’s driven to find out what happened. Unlike other RPGs where we play as the protagonist, Gus is independent. Early in the game, he becomes aware of us, introducing opportunities for both witty banter and deeper questions about reality and identity. It’s a quirky experience that will make fans of titles like Earthbound and Undertale feel right at home.

Glitched’s characters operate based on Essence, a system that will seem a bit familiar to anyone who’s ever filled out a Dungeons & Dragons character sheet. It basically outlines your personality traits, including your moral leanings, attitude, and talents. Each person you meet as you play will have a different Essence, and you’ll need to be aware of how it will play against your own. By playing through the game, Hilton explains, you’ll learn what it means to be a certain Essence. 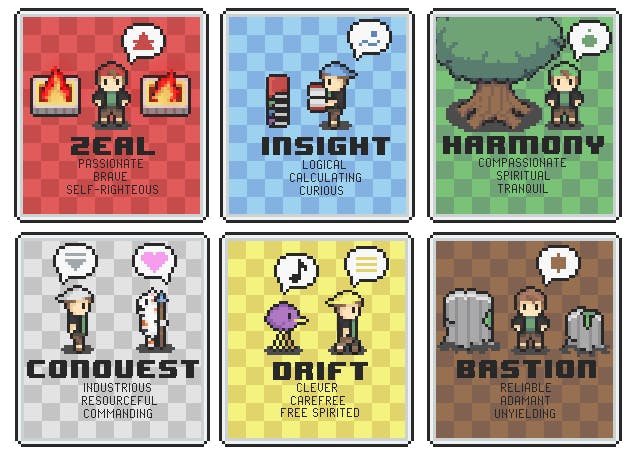 “(Essence) will open up pathways in certain parts of the game and create barriers in others,” Hilton said. “It’s really fun because your conversations with Gus allow you to go beyond two simple options, like ‘kill’ or ‘spare.’ Why do you kill an enemy, if you choose to? What’s the morality behind killing them? How do you rest with it if you do kill them?”

Glitched‘s battles allow you to do more than just fight for your life. You’ll also be given the options to talk, bribe, give gifts, kill, or spare the creatures you battle—all choices which affect your Essence. By not killing an enemy outright, you may find it will share critical information with you as well. 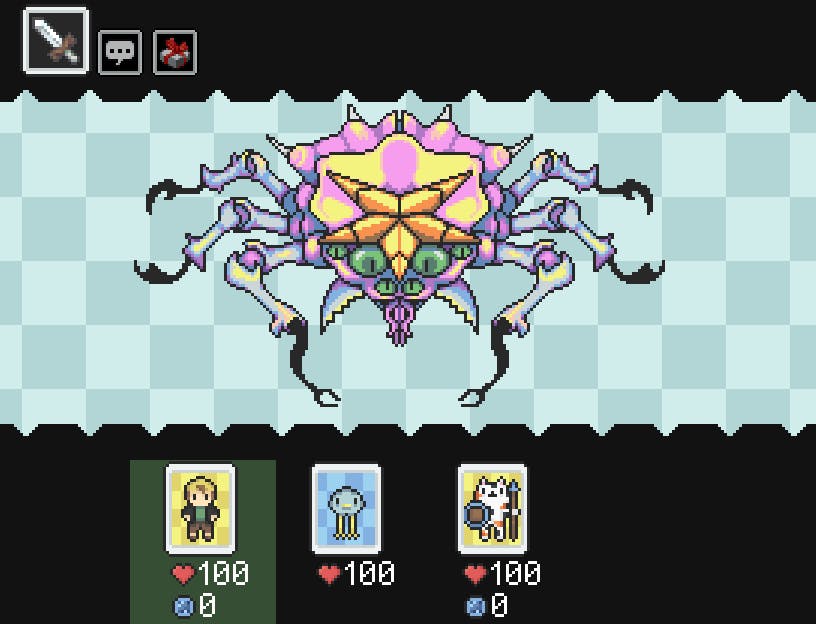 Not only can you choose how you interact with each person or creature that you meet, but there will be a lot of them. Hilton tells us that the team has 60 playable characters planned for the final release, and they’ve put a lot of time into populating Soren with wacky characters that will be fun for players to discover.

“In the demo there’s a tree stump that comes to life when you try to sit on it, and he attacks you if you try,” Hilton says. “If you talk to enough trees or rocks or bushes, you meet a character named Rewardo who gives you a weird cookie for interacting with objects. There will be fish gods, and even a special species of fence you can interact with. Yes, I did say fence!”

Hilton roomed with fellow developers Nikko Koruma and Zack McDonald when they attended DePaul University together in 2012. Koruma and McDonald both studied game development, while Hilton studied to learn multiple languages so he could work in the Japanese video game industry. As the three shared ideas and inspirations, and the conversation naturally turned to making a game together. Hilton says they spent hours and hours coming up with maps, stories, and game mechanics before they realized they had a project on their hands that could actually be made. 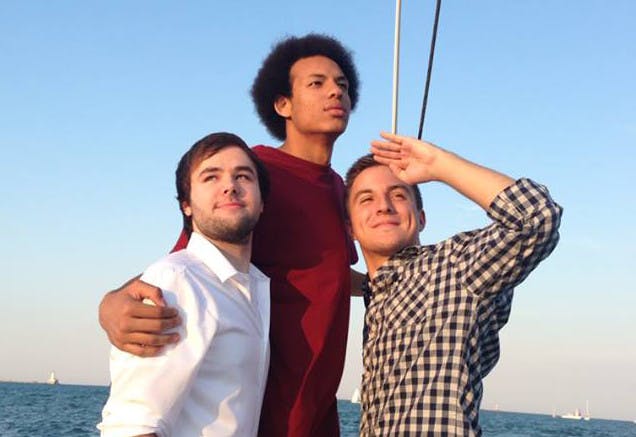 “It started out as us kind of joking around, but over time it turned into something legitimate,” he said. 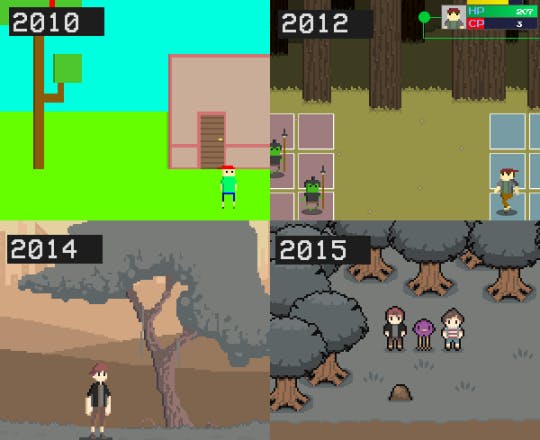 How Glitched has evolved since 2010

Glitched‘s Kickstarter campaign has made their game very legitimate indeed. With more than $52,000 in pledges, the project is 700 percent funded, giving the trio generous resources to not only bring Glitched to life, but also to explore how far its boundaries will reach. They only got here by learning from the mistakes they made the first time they attempted to fund the game back in 2014.

“It was the same idea, but it was in its early stages, and we didn’t quite have it created,” Hilton said. “This time, we wanted to make sure we could show backers that we can actually do something of this caliber and we can do it well. Hence our two hour demo. This time, even when we hit the launch button, I was expecting to get a few donations from our family members and friends and have it sit there. The next thing you know, we hit our funding goal in 24 hours.” 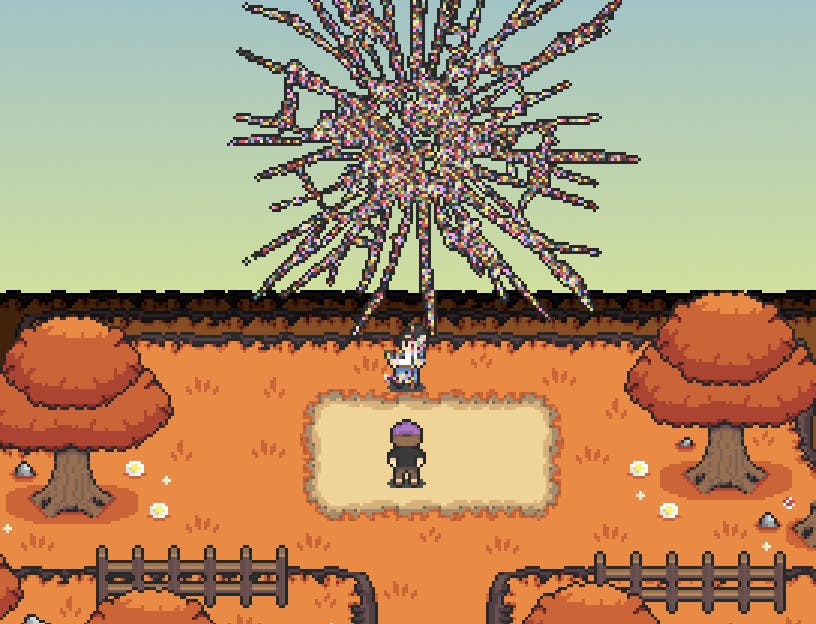 The team has set a release date of February 2018, partially because of the indie crowdfunding scene’s reputation of delivering games late and partially because they’ve chosen to switch from RPG Maker to GameMaker to create the final product (the demo was made in RPG Maker). They wanted to make the best game they could, Hilton says, so they chose to overshoot the goal a bit rather than cut it close and disappoint their backers.

“We looked at the development time of the demo, and it far exceeded our original expectations,” Hilton said. “We thought it would take a lot less time than it did. We think it could be feasible to get the game done in a year, but with our demo we found out that playtesting takes longer than we thought. A lot of people found game-breaking bugs in the demo. We were able to fix those in later versions, but we want to make sure we have ample time so that when the product does go on shelves, it’s something people can jump right into and really enjoy.”

While Hilton can’t say how long Glitched will be yet, he is optimistic after watching how fans react to the demo. He marvels at how many parts they still have yet to discover.

“Just watching people do Let’s Plays in the demo is amazing for us because we get to see how people play our game,” Hilton said.

As Glitched celebrates the success of its Kickstarter, Hilton and his team are faced with the next exciting step: Creating their game not only as they originally imagined, but deepening it significantly as well. By giving themselves time to delve further into the storyline, Glitched continues to morph.

“Gus needs to come to terms with his reality as a video game character,” Hilton said. “But he’s only going to do that through conversations with you. And he’s going to ask you questions about your own reality, your own perception of your existence. Throughout the game you are going to brush up against these big, overarching questions that philosophers have been talking about for centuries. It’s going to be a lot of fun.”