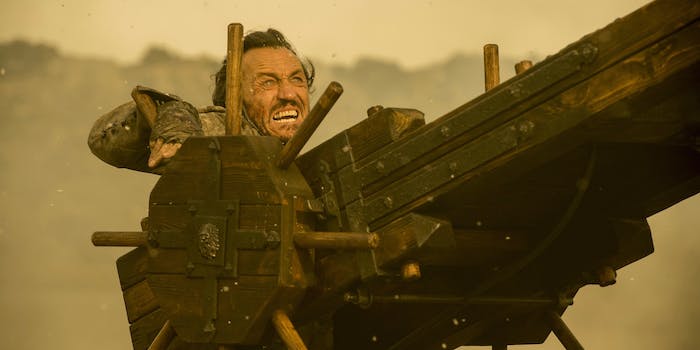 'I've found he's quite easy just to connect with him in the present.'

Not everyone on Game of Thrones made it to the end of the series or got a happy ending, but one Westerosi sellsword pulled off the rarest of feats: He got both.

We first met Bronn all the way back in season 1 as he stepped in to fight Tyrion Lannister’s trial by combat (for a price) and quickly became something of a fan favorite. Often the comic relief but handy with a weapon, his allegiances often changed at the drop of a hat—or with the promise of a greater payout from another Lannister sibling. But sometimes his interests aligned with the greater interests of monarchs and lords and led to those moments of heroism. For Jerome Flynn, who played Bronn for eight seasons, a lot of that was already on the page.

“He was so beautifully written that I’ve found he’s quite easy just to connect with him in the present and what he had in front of him,” he told the Daily Dot at Con of Thrones.

Like Kit Harington, who famously waited until the season 8 table read to discover what happened (and whose reaction is captured in part in the HBO documentary Game of Thrones: The Last Watch), Flynn held off from reading what happened to his character until that table read.

“It was really something to go through that with everybody there,” Flynn said of the emotion in the room. “First time with all them together. You know, in two mornings, it was like living through all that. It was very emotional for a lot of people, especially the young ones who’d been brought up with those characters. Such a huge job and a magical 10 years. So it was a special occasion, for sure.”

And while Flynn didn’t process what he read ahead of time like other cast members, he was still swept up by the story that was told.

“In terms of what happened, yeah, I was moved,” he added. “Shocked, sad, and I thought they did a good job.”

In a story full of warring factions, schemers, and soldiers trying to save everyone from themselves, the highborn characters often lost sight of the common folk who aren’t always swayed by those plights. But Flynn believed that Bronn wasn’t only aware of how some of those lords probably came to power but also how he could take advantage of everyone to get a leg up for himself.

And that he did. By the end of the series, not only is Bronn the owner of an extravagant castle, but he’s also the Lord of Highgarden and the Master of Coin in Bran’s small council—and someone who argued for boosting the economy by rebuilding the brothels in King’s Landing. (Although he does think Tyrion might’ve taken him aside after that small council meeting to give him some pointers on playing the game.)

“I think what he did quite a lot of was, he said it in that scene with the crossbow with [Jaime and Tyrion],” Flynn said. “He said, who started the families? It was just some bastard who could kill a lot of people. And he recognized that early on. He’s clever and he realized that, in a way, it could be an illusion, this whole idea of highborn and that you could create, make your own highborn. Which is what he did. He realized he could break through, cut through. In a way, he was a revolutionary of his time.”