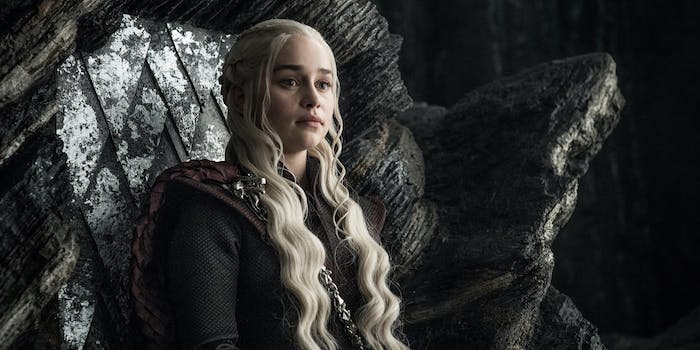 George R.R. Martin reveals his role in the ‘Game of Thrones’ prequel series ‘House of the Dragon’

He said that working with co-creator Ryan Condal 'has been a dream.'

Earlier this week, HBO announced that it greenlit House of the Dragon, a House Targaryen-centric Game of Thrones prequel, straight to series, listing Ryan Condal and George R.R. Martin as co-creators. Now, Martin is opening up about what exactly that will mean.

Although Martin had a hand in creating the series—not to mention that House of the Dragon will be based on his Targaryen history book Fire and Blood—Game of Thrones director Miguel Sapochnik is the co-showrunner of the series with Condal. But there’s no ill will from Martin, who said of Sapochnik’s involvement that “there’s no one better.”

In a blog post about the latest update from Westeros, Martin expands on his initial impression of Condal, who he met long before they would co-create House of the Dragon together.

“He’s a terrific writer… and a fan of my books since well before we met,” Martin wrote. “He tells me that he discovered the series just after A STORM OF SWORDS was published, and ‘I’ve loved the books for 19 years.’ (He is also a huge fan of my Dunk & Egg stories. In fact, that was the show he wanted to do initially, but I’m not prepared to bring Dunk & Egg to television until I’ve written quite a few more stories). Working with Ryan on the development of HOUSE OF THE DRAGON has been a dream.”

According to Martin, House of the Dragon was the first series that he pitched to HBO when the idea of a follow-up to Game of Thrones started to emerge all the way back in 2016. Martin’s involvement in the prequel process even included personally asking Game of Thrones writer and executive producer Bryan Cogman to pitch a series, which Martin called an adaptation. HBO passed on Cogman’s series (which Cogman confirmed in April) and he signed a deal with Amazon Studios.

He also confirmed that Jane Goldman’s Age of Heroes series is no longer happening, which HBO has yet to do. He pushed back against the idea that HBO canceled Goldman’s series because it was greenlighting Condal’s series, pointing to the CSI and Chicago franchises as examples of TV franchises with multiple series airing at once.

“It goes without saying that I was saddened to hear the show would not be going to series. Jane Goldman is a terrific screenwriter, and I enjoyed brainstorming with her,” he said. “I do not know why HBO decided not to go to series on this one, but I do not think it had to do with HOUSE OF THE DRAGON. This was never an either/or situation.”

But Martin is clearly excited about House of the Dragon, and he wrote about everything that still needed to be done on the show, suggesting that he’s going to be at least somewhat involved in the process of making it; he even teased the possibility of writing episodes for House of the Dragon. But only after his biggest obligation is finally met, he added before fans could possibly chastise him for not focusing on The Winds of Winter.

“But… let me make this perfectly clear… I am not taking on any scripts until I have finished and delivered WINDS OF WINTER,” he wrote. “Winter is still coming, and WINDS remains my priority, as much as I’d love to write an episodes [sic] of HOUSE.”