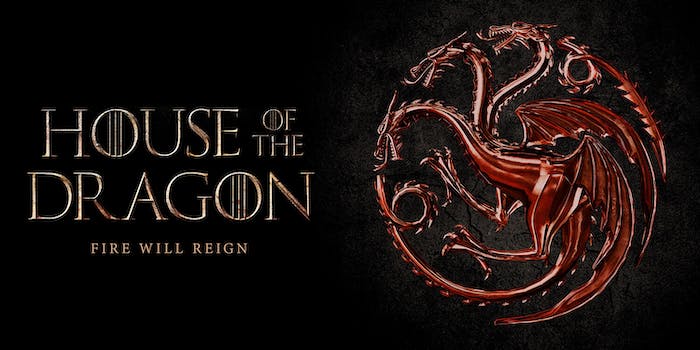 Just several hours after reports emerged that HBO wasn’t moving forward with one of its Game of Thrones prequel series, another prequel show is getting a straight-to-series order.

At WarnerMedia Day on Tuesday, HBO Programming president Casey Bloys announced that House of the Dragon, a Targaryen-centric prequel that is based on George R.R. Martin’s Fire and Blood, is getting a 10-episode order. First revealed last month, House of the Dragon is co-created by Ryan Condal (Colony) and Martin, who’s also an executive producer. Condal will serve as showrunner alongside Emmy award-winning director Miguel Sapochnik, who’s responsible for some of Game of Thrones’ most impressive battle episodes.

“The Game of Thrones universe is so rich with stories,” Bloys said. “We look forward to exploring the origins of House Targaryen and the earlier days of Westeros along with Miguel, Ryan and George.”

Little is known about House of the Dragon. According to HBO, “the series, which is set 300 years before the events of Game of Thrones, tells the story of House Targaryen.” Fire and Blood, which Martin published in November 2018, chronicles the Targaryen family reign. But it’s only the first of two volumes: Fire and Blood covers the reign of Aegon I Targaryen, who conquered Westeros with his sister-wives Visenya and Rhaenys and dragons, to Aegon III Targaryen, who became king of the Seven Kingdoms after the Dance of the Dragons resulted in a civil war that led to the extinction of dragons in Westeros. (If you’re looking for more details about Daenerys Targaryen’s father, you’ll have to wait until the second volume.)

Martin has yet to publicly comment on the series pick-up, but when news of Condal’s series first broke in September, he had nothing but high praise for him.

“He’s a helluva strong writer, and a huge fan of A SONG OF ICE & FIRE, Dunk & Egg, and Westeros in general,” Martin wrote. “I’ve loved working with him, and if the Seven Gods and HBO are kind, I hope to keep on working with him for years to come on this new successor show.”

It’s already been a busy few days for Game of Thrones fans. Over the weekend, comments made by showrunners David Benioff and D.B. Weiss where they admitted their inexperience while making a television show at the beginning of the series, which they’ve previously done on several occasions, went viral. On Monday night, Benioff and Weiss officially left the Star Wars series they were set to write, citing their Netflix projects as a conflict. By Tuesday afternoon, news that Jane Goldman’s Age of Heroes series wouldn’t move forward emerged online.

The final Game of Thrones update before HBO announced House of the Dragon looked especially bad from an optics perspective: Goldman had to make a pilot that wasn’t picked up for her Game of Thrones prequel, while several hours after her series was axed, Condal and Sapochnik’s series got a 10-episode order. But it’s also true that a Targaryen series based on an already published Martin book is probably an easier sell than a show whose canon is less established, and according to TVLine, HBO executives weren’t happy with what they saw of Goldman’s pilot even after it was re-edited based on initial feedback.

HBO did not give any indication of when House of the Dragon would premiere on HBO, which means that at the very least, we’ll have plenty of time to plow through all 700-plus pages of Fire and Blood before the show debuts.