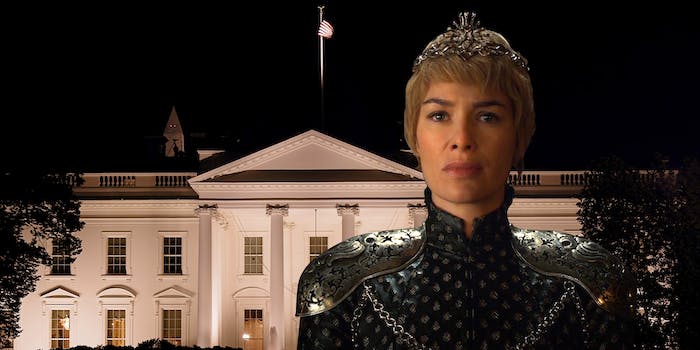 Why HBO’s ‘Game of Thrones’ election is so underwhelming

It's all fun and games, until fantasy seems better than reality.

Game of Thrones is full of political intrigue, so it was only a matter of time before it became an overused if sometimes fitting political cliché.

HBO’s hit fantasy series has spawned numerous comparisons to the presidential election in 2016, from the drama of the Republican primary to Donald Trump being pegged as a ringer for Joffrey Baratheon if he had nuclear access codes. There are theories that the Bushes are the Lannisters. Hillary Clinton is often characterized as Daenerys Targaryen, although Cersei Lannister or Olenna Tyrell—more seasoned and ruthless politicians handling business for their less capable husbands and sons—might be more fitting. (Although we can’t deny that dragon imagery.)

It was even the subject of a CNN segment back in May, when the cable news network took a momentary, blessed break from the campaign trail to try and make heads and tails of Westerosi politics.

At the beginning of August, HBO further strengthened the connection by creating the GOT Party, pitting the remaining major characters against one another as part of a tie-in promotion for the digital release of Game of Thrones’s sixth season. HBO really committed to the idea, giving each character a running mate, creating a platform, and airing slick political ads on YouTube. Daenerys Targaryen and Tyrion Lannister are all about female empowerment and reuniting Westeros and Essos, Jon Snow and Lyanna Mormont strive for Northern Sovereignty, Cersei Lannister and Qyburn want, understandably, the “Separation of Church and Crown,” and Petyr Baelish and Sansa Stark are interested in small business and reducing debt.

More than 1.6 million votes have been cast for Dany, Jon, Cersei, and Baelish, and results of the “election” will be announced on Sept. 1. With polls closing soon, the White Wolf is leading with the Breaker of Chains right on his tail for the title. (At least Game of Thrones spared us the one candidate whose actions brought instant comparisons to one presidential nominee.) 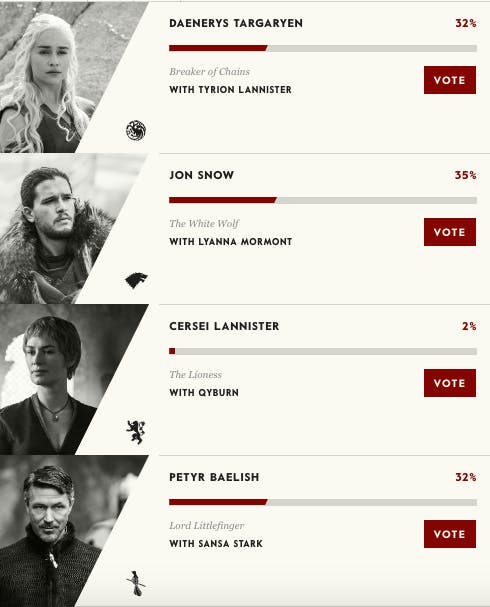 It’s a fun little promotion, and although it would’ve been a perfect preview for the War of the Five Kings plot from season 6, it’s pretty harmless; some sites have even analyzed each of the candidate’s platforms. But it has been rather underwhelming delving into a parody of the 2016 election when the real one sometimes feels like a parody itself—or, as some have put it, “the last season of America.” We’ve still got two more months of this and we’re already fatigued after a year-long slog of constant, eyebrow-raising coverage.

At this point in Game of Thrones, Cersei has burned down half of King’s Landing in order to take out the High Sparrow, her son’s politically savvy queen, and countless others courtiers. The power play (or complete stroke of madness) secured her the Iron Throne—though she lost her third and final child in the process when the young king jumped from a window.

Election 2016 may seem rough, but at least we’re not solving our elections and issues with marriage alliances and murder anymore, right?