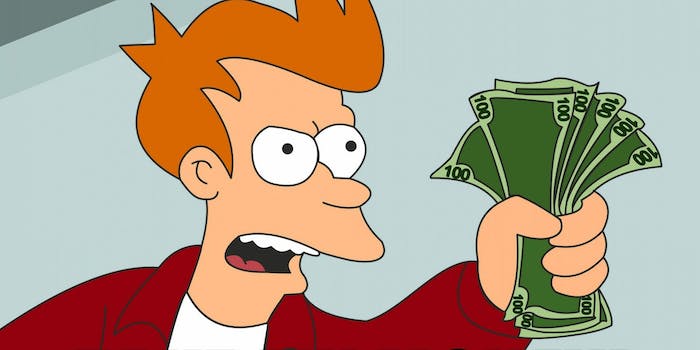 Shut up and take these ‘Futurama’ memes

Discover the secrets of Futurama's biggest and best memes.

No one expected Futurama to become a cultural phenomenon when it first hit airwaves in 1999. The first new cartoon from Matt Groening since the birth of The Simpsons in the ’80s, Futurama started off with killer ratings but was sadly canceled after just four seasons. But something strange happened: Cartoon Network picked up the rights to the show’s reruns and quickly discovered a voracious fan base longing to watch the original episodes over and over again.

Eventually, the show was rebooted by Comedy Central, producing three more seasons of the show and making it one of a handful of cartoons in history to ever find a second life after cancellation. Though new episodes are no longer being produced, Futurama lives on in messageboard posts, tweets, Reddit threads, and everywhere else the language of memes is used. Over the course of the show’s seven seasons, it birthed an unusually large number of classic memes and a handful of lesser-known treasures.

Here’s a crash course in the best Futurama memes.

“Shut up and take my money!”

In the context of Futurama memes, “Shut up and take my money” is the most popular and from the revival of the show. In this parody of consumer culture, an “eyePhone”-obsessed Fry heads to the store to buy a new phone from Mom Industries. Upon learning the cool new device has terrible battery life and reception, he has but one response. The meme’s taken on a life of its own, becoming a near-universal internet symbol for when logic and reason can’t stop us from stupidly spending all our money.

Futurama’s animation shines in action scenes but absolutely soars when a character’s expresses themselves. Whether showing a look of heartbreak, patience, or disbelief, Futurama’s animators make every emotion palpable. That’s especially true with this meme from “The Lesser of Two Evils”Thankfully “ that Fry’s look of contemplation and utter disbelief. It’s easily the most memorable all the Futurama memes. In its current life, the meme is used to express wonder at whether a situation has been misunderstood. It’s most classic variant is “Not sure if trolling or just stupid.”

There have been plenty of variations, including this riff from The Simpsons:

Moral questions of our day:

When you take the meme too far:

“I don’t want to live on this planet anymore.”

Sometimes on the internet, the world shows you something so dumb that the concept of your own human life doesn’t matter anymore. Maybe you don’t even want to die. You just don’t want to be on a planet where people that dumb exist. In its original content, Dr. Farnsworth utters it when one of this scientific discoveries is used to disprove evolution. He follows through with his threat, briefly moving to an uninhabited planetoid alone with only an inflatable shack, four grand pianos, and some pizza.

Sadly, we can’t run away from our problems like that, but at least we can sooth them with sweet, sweet memes. Here are our favorite times when someone pulled out this meme.

When the justice system punishes the wrong people:

Taken from the final episode of Futurama’s original run, this meme has become a catch-all for mocking people for their failures and for playfully ribbing friends. In “The Devil’s Hands are Idle Playthings,” Fry is given the Devil’s robot hands, turning him into a virtuoso pianist. When the Devil takes his hands back, Fry is left to perform using only his talents. His friend Zoidberg tries to encourage him, shouting, “The music was in your heart, not your hands.” Here’s what happens:

In its original meme form, seen below, the phrase was used to let someone know when they’d started a terrible thread on a message board.

By 2009, the meme had spread far enough to be used in a Deadspin headline.

Make your own with this meme generator. (I fully expect to be tweeted, “your article is bad, and you should feel bad.”)

So what does “Why not Zoidberg?” mean? It’s sort of like Seinfeld. It has no meaning. According to KnowYourMeme, “Why not Zoidberg” originates from a Reddit post in 2011 that reached the front page of the site with 6,665 upvotes. In the years since the post has been downvoted considerably, but its legend lives on.

Variants of the meme all center around the same punchline, with occasional sidetracks. In most uses, “Why not Zoidberg” is less a suggestion than a nonchalant suggestion by an apathetic party. Its applications include baby names:

And arts and crafts:

The meme has even explored Zoidberg’s feelings on the meme, in the most Futurama manner possible:

Hypnotoad is as much a game as it is a meme. In the show, Hypnotoad is an all-powerful amphibian with the power to hypnotize any living creature it wishes. In its first appearance, Hypnotoad uses its powers to win the grand prize in a pet contest, though Hypnotoad cannot be owned. ALL GLORY TO THE HYPNOTOAD.

Here’s how the game works. When you reference Hypnotoad stop your sentence abruptly and add “-ALL GLORY TO THE HYPNOTOAD” in place of your regular text. This is a particularly goofy meme, which is part of its charm. It’s a fun little game for fans of the show to play.