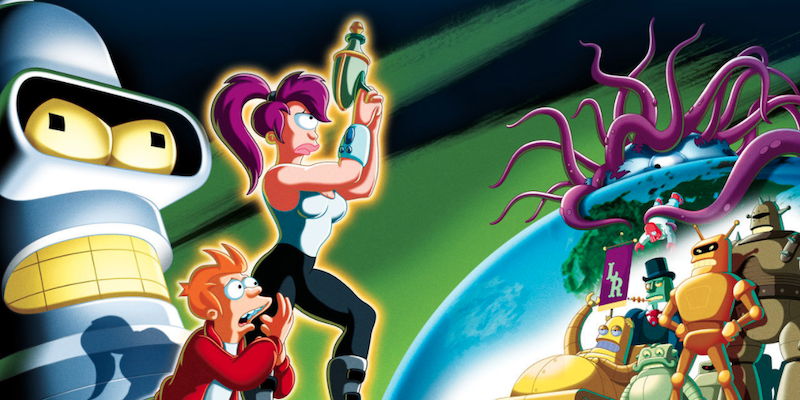 10 interesting facts about Leela, your favorite mutant from ‘Futurama’

Here's everything you need to know about the captain of the Planet Express ship.

Futurama may be off the air, but its characters live on in the hearts and minds of fans thanks to their hysterical jokes and surprisingly soulful backstories. Turanga Leela, or Leela to her friends, was an important part of the show’s success. Equal parts ass-kicking action star and lost soul looking for her place in the universe, everyone knows Leela is the real hero of the story. Before you start binge-watching Futurama again take a look at these fascinating facts about everyone’s favorite one-eyed mutant.

Leela spent her childhood in the Cookieville Minimum-Security Orphanarium, where she was told she was part of a previously unknown alien race. She spent her entire life believing that, until discovering in her 20s that she was a human mutant. Her parents left her at the orphanage spare her a life as an outcast forced to live underground. As an alien she had full rights and access to society. Mutants, meanwhile, didn’t gain surface rights until 3010—six seasons into the show.

2) Futurama showed Leela’s parents years before it introduced them

Leela’s parents, Turanga Morris and Turanga Munda, first appeared on screen two years before they were formally introduced as characters. Leela didn’t find out that she’s a mutant until season 4, but Futurama is big on foreshadowing. Back in season 2, you see her folks very briefly in a background scene during the episode “I Second That Emotion.” They’re disheveled, apparently having just come up from their home underground.

Leela first name is Turanga, which is taken from Olivier Messiaen’s 1948 symphony “Turangalila-Symphonie.” The symphony was written from 1946 to 1948 for the Boston Symphony Orchestra. You can hear it here.

Matt Groening has also confirmed in the show’s DVD commentary that the name Leela is a tribute to the Fourth Doctor’s companion on the classic BBC series Doctor Who. On Doctor Who, Leela was also a warrior with a complicated past. Born on an alien world to survivors of a crashed spaceship from Earth, Leela was part of a primitive tribe with its own isolated society, much like the mutants on Futurama. She finally parted ways with the Doctor after 40 episodes when she fell in love with Andred, a Time Lord of Gallifrey. The Doctor’s robot dog, K9 Mark I, decided to stay with Leela to protect her.

The Wristlojackimator has many uses. It’s a communicator, medical grade laser (once used to reattach Fry’s nose), game system (Pong and Tetris), tracking device, scanner, and tissue dispenser. Unfortunately, it also includes holographic targeted advertising. Apparently the ads of the future will be so prevalent we’ll wear them.

In an interview with Games Radar, actress Lauren Tom revealed Amy was original supposed to have a deeper, gruffer voice, but Leela was already so tough the show had to adjust.

“Amy’s voice is actually close to my natural voice. She actually started out much different than she ended up. She was supposed to be a car mechanic, really tough lesbian sort of character,” Tom said. “I came in, and that’s so… not… my natural essence, but Matt liked my laugh, so he said, ‘We’ll just cast you, and we’ll figure out what to do later —we have to get that laugh in there somewhere.

“We tried to make it gruff at first, but Leela (Katey Segal) is so tough that it was a good juxtaposition to have something different. So I don’t have to work too hard at Amy, not like Maurice [LaMarche], who does eight voices or so.”

In “Into the Wild Green Yonder” chauvinist space captain Zapp Brannigan reveals that he knows Leela’s exact measurements: 36-24-36. The exchange shows that Zapp’s a creep who knows too much about folks, but the numbers themselves are also a Simpsons Easter egg. Bart’s locker combination is also 36-24-36.

In season 7, episode 5, Leela’s parents get divorced due to her mother Munda’s desire to explore the universe. During the episode, Munda—a Brown University educated exolinguist—saves Zapp from death when he accidentally insults an alien talking in a language he didn’t know. Munda and Zapp begin to date, much to the chagrin of Leela. Thankfully the union was short lived, and Munda returned to Leela’s dad.

In “Future Stock” the show parodies Apple’s famous “1984” ad. The original, directed by Ridley Scott, aired during the Super Bowl and has become one of the most famous advertisements in history. Apple’s board of directors hated the ad and wanted the company to try and sell the time they’d bought during the Super Bowl to another company. In Futurama, history repeats itself. When Leela sees the new CEO of Planet Express’ ad (a parody of the Apple original) her only response is, “That was terrible! People won’t even know what we do!”

Casual Futurama fans may think Leela’s purple hair and cyclops eye are her only mutations, but they’d be wrong. In “The Beast With A Billion Backs” we learn that spikes that grow out of her elbow skin, lovingly called elbow talons, which she trims regularly. She also has 205 bones, one less than normal human beings.

Her most impressive mutation is a singing boil that occasionally appears on her butt named Susan. Yes, Susan Boil. Damn you, Futurama. (If you don’t get the joke, it’s worth googling).

Futurama is known for hiding tiny, blink-and-you’ll-miss-them jokes throughout the show, but the puns about Leela are truly remarkable. For example, Leela lives in apartment 1I, aka One Eye. That’s bad, but the best/worst pun about Leela is her official officer’s code, 1BDI. Or “One Beedee Eye.” Futurama writers sure loved terrible jokes.