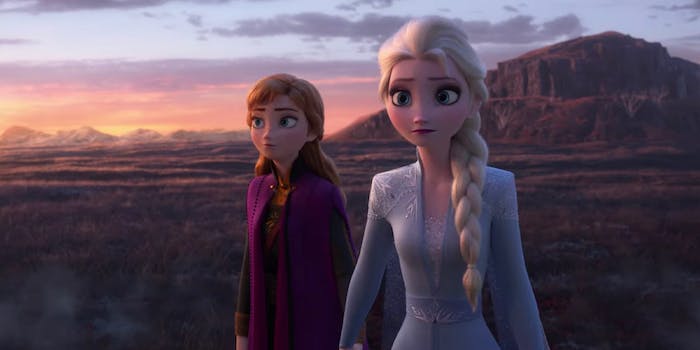 Elsa and Anna venture into the unknown in ‘Frozen 2’ trailer

They're not letting it go.

After forging ahead in the first Frozen film, Frozen 2 is looking back toward the past.

After the first teaser showed Elsa testing the limits of her powers, the full trailer shows even more of that scene, along with strange new visions. But with strange forces providing to be a potential threat to Arendelle and everyone in it, Elsa, Anna, Kristoff, Sven, and Olaf are heading north and into the unknown, even as magical elements stand to get in their way.

The official logline from Walt Disney Animation Studios reveals that Frozen 2 will delve even more into its magical elements and Elsa’s origins.

Why was Elsa born with magical powers? The answer is calling her and threatening her kingdom. Together with Anna, Kristoff, Olaf and Sven, she’ll set out on a dangerous but remarkable journey. In Frozen, Elsa feared her powers were too much for the world. In Frozen 2, she must hope they are enough.

Frozen 2 arrives in theaters on Nov. 22.