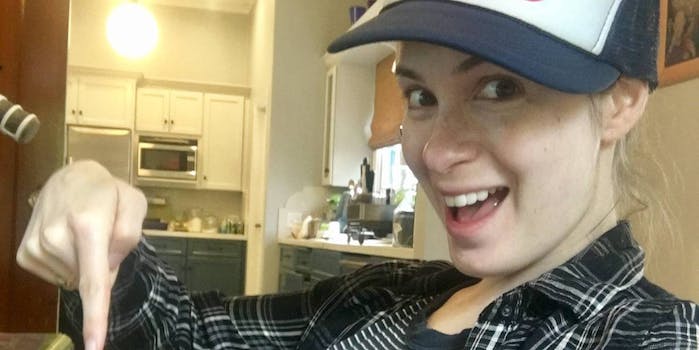 This is going to be the most adorably geeky baby ever.

Felicia Day, geek goddess and founder of Geek and Sundry, announced her pregnancy on Facebook on Tuesday afternoon.

Day’s best recognized for her appearances on Buffy the Vampire Slayer and Dr. Horrible’s Sing-Along Blog, but lately she’s been running nerd site Geek and Sundry; creating, writing, and starring in webseries The Guild; and generally being a badass of all things pop culture.

She’s apparently due later this month. She clarified the timeline and added that it’s a baby girl in an Instagram post:

She’s coming in like three weeks so I guess I should announce this and stuff.

She specifically posted the photo Facebook “so it will pop up in some stupid FB slide show at the end of they year.” It’s one she’s gonna want to revisit with her daughter as she grows up, too, if for no other reason than to show off the exquisite “As Seen on Your Mom” trucker cap.