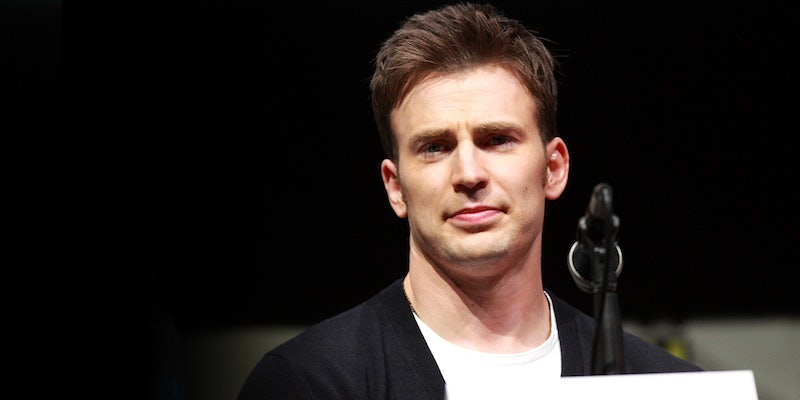 All but one of Marvel's 'Avengers' have bucked against their airtight, multi-picture contracts.

Chris Evans, star of Captain America and The Avengers, wants to quit the acting business.

We say “wants to,” because until he’s completed his six-movie contract with Marvel, he really has no choice in the matter.

It’s standard for major studios to sign actors for multi-picture contracts like this, particularly when they’re making the kind of blockbuster movies that almost certainly result in sequels. Marvel is one of the most extreme examples, because there’s so much crossover potential between the various Avengers spinoffs that completing a six-movie deal perfectly plausible. Scarlett Johansson, for example, has now played a central role in three separate Marvel movies, without ever headlining a Black Widow movie of her own.

A couple of weeks ago, Chris Evans mentioned in an interview that he had plans to leave acting and spend more time as a director instead, saying that he was done with superhero movies. “I just don’t know if my heart’s as in it as it once was,” he said. “I think when I’m done with this Marvel contract, I’ll take a little break from acting.”

Superhero movie fans immediately began to speculate that Evans might try to pull out of the Avengers franchise, causing Evans to backtrack with what sounded suspiciously like a pre-written statement from Marvel’s PR department. “I gotta watch what I say,” he said. “I will absolutely clarify. I have a six-movie contract with Marvel and I absolutely plan on fulfilling them. This is without a doubt the biggest blessing in my life. Marvel has literally changed the game for me, and they make great movies.”

Unfortunately, this didn’t do anything to change an interview that Evans had already done with Variety, which included this uncharacteristically grim outlook on the next few years of his career: “If I’m acting at all, it’s going to be under Marvel contract… I can’t see myself pursuing acting strictly outside of what I’m contractually obligated to do.”

The article goes on to make some pretty unsubtle comparisons between Captain America’s skin-tight costume and the draconian restrictions of Evans’ Marvel contract.

Chris Evans is known for being ridiculously likeable—a labrador puppy in human form. So it’s not really surprising that most Marvel fans still find it easy to believe that he’s happy to make all six of those contractually obligated Marvel movies. There’s also the fact that he genuinely seems to like the character of Captain America, which is why you have to dig a little deeper into the Marvel filmmaking process to understand why he wants out.

With a movie like The Avengers, each actor’s role is split three ways between “real” acting, filming CGI-heavy action sequences, and then the months of promotional tours that take them across the world to answer the same bland press questions multiple times a day.

Promotional appearances are always a big part of any Hollywood actor’s job, but franchises like Avengers, Star Trek, and The Hunger Games are in a league of their own. Half of the promo process is tied up in the cast being charming and interesting at Comic Con, press conferences, talk show interviews, and fan events. In turn, all of that content is absorbed, analyzed and regurgitated by fans and bloggers all over the world, meaning that the actors are effectively under the spotlight 24/7. Just look at the type of stuff Tom Hiddleston has agreed to do while promoting his various Marvel appearances.

The Avengers cast members are all pretty great at this kind of advertisement theater, helped along by the fact that many of them were already friends in real life. The cracks only begin to show when an actor realizes that they might not be able to cope with being in the superhero spotlight for a solid decade. Only then do they comprehend the magnitude of those ironclad six-movie contracts—or in the case of Sebastian Stan (Bucky Barnes in the Captain America movies) or Samuel L. Jackson, nine movies.

Obviously this is the definition of a rich person problem. Everyone in The Avengers cast is a world-famous celebrity, and is earning more money than many of us will see in a lifetime. But it’s worth acknowledging that half of the previously cheerful Avengers actors are nowhere near as enthusiastic as they were during their first Marvel appearances.

Robert Downey Jr. is Marvel’s cash cow, and is well known in industry circles as an aggressive negotiator. He brought his price up to $50 million for The Avengers—a paycheck that may have been a direct result of his original contract being slightly looser than the others.

Since then he’s demanded more money for each successive Marvel appearance, with a lengthy Deadline.com industry analysis characterizing him as a kind of father figure/financial advisor to the younger and less experienced Avengers actors. At least one member of the main cast was reputedly paid $200,000 for The Avengers, with relative newcomer Chris Hemsworth getting $1 million for Thor and Avengers combined. (To put things into perspective, Thor grossed $181 million at the box office, while Avengers famously made well over $1 billion.)

This may all sound pretty ridiculous. A contract for $200,000 isn’t pocket change, after all. But for actors like Johansson and Evans, who often go for this type of high-profile movie to stay on the A-list and fund a career doing low-budget indie movies, what’s the point in spending six months Avenging when you can earn 10 times as much on a different summer blockbuster?

At the moment, Mark Ruffalo is the only Avenger who hasn’t voiced discomfort about his role in the franchise or attempted to renegotiate his contract for more money. It’s probably no coincidence that he was also the one with the most traditional acting role in The Avengers: mostly just standing around and talking, with CGI taking over whenever he turned into the Hulk. By comparison, Jeremy Renner (Hawkeye), Scarlett Johansson and Chris Evans all had to spend a lot of time filming action sequences and then answering press questions about whether they were wearing underwear beneath their skin-tight costumes.

While promoting Captain America: The Winter Soldier this week, Johansson actually described the experience as like being in “a gilded cage.” Bear in mind, this is coming from someone who has actually said she wants a solo Marvel movie of her own. But if you want to see an example of someone who really doesn’t seem to care about offending Marvel in this regard, look no further than Jeremy Renner.

“For 90 percent of the movie, I’m not the character I signed on to play,” Renner said last year, referring to his role in The Avengers.  “It’s kind of a vacancy. [He’s] not even a bad guy, because there’s not really a consciousness to him. To take away who that character is and just have him be this robot… I was limited, you know what I mean? I was a terminator in a way. Fun stunts. But is there any sort of emotional content or thought process? No.”

This quote led to an instant rush of rumors that he’d be dropped from Avengers: Age of Ultron in 2015, but obviously that didn’t happen.

Like everyone else in the franchise, Renner was locked into one of those multi-picture contracts. And despite what he may have felt was a disappointingly passive role in The Avengers, Hawkeye is a popular character with a bestselling comic book series to his name, not to mention countless toy and merchandising deals. Introducing a new superhero to replace Hawkeye would be needlessly costly and complicated, so it’s easier to just sweep Renner’s lacklustre attitude under the rug and pull him back in for the next movie on his contract.

The good news for Renner is that Hawkeye is rumored to have a far weightier role in Avengers: Age of Ultron. The bad news for everyone else is that barring some kind of epic public meltdown, there’s no way to wriggle out of a Marvel contract.

The only ray of hope is that Joss Whedon will do what he does best and kill off a main character in the next movie. But that’s unlikely to be Captain America, who will be Marvel’s main headliner when Robert Downey Jr. finally hangs up his iron suit. This all adds up to the grim reality that including Age of Ultron next year, Chris Evans still has three movies to go before he can escape from Marvel’s gilded gulag.