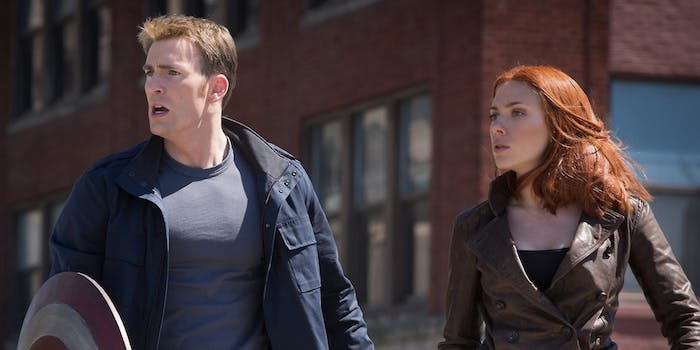 Marvel reveals there may be a Black Widow movie after all

After years of speculation, Marvel have finally, finally admitted that there may be a Black Widow movie in our future.

In an interview about the upcoming Captain America: The Winter Soldier, Marvel producer and Avengers franchise mastermind Kevin Feige spilled the beans on some new developments for Black Widow’s character journey.

“We start filming the next Avengers film at the end of March,” Feige told Total Film. “Widow’s part in that is very big. We learn more about her past and learn more about where she came from and how she became in that film. The notion of exploring that even further in her own film would be great, and we have some development work with that.”

Not exactly a solid confirmation, but this quote already has comicbook fans buzzing with excitement. Considering the number of people who have been asking for a Black Widow movie (or, well, any female superhero movie) ever since the Avengers franchise started to pick up steam, it seems unlikely that Feige would say anything like this if there wasn’t something in the early stages of development.

While Marvel is generally viewed to be better at including female characters than its main superhero movie rival DC/Warner Bros., the Avengers franchise has been under extra scrutiny due to being headed up by feminist geek icon Joss Whedon. At the moment, Black Widow is the only female superhero among an ever-growing crowd of men, and there are usually just one or two supporting female cast members in each Marvel movie.

Last October, Feige disappointed many fans by saying that there Marvel had no plans for female-led superhero movie, but this week’s comments seem like far more positive news. One good sign is the fact that Captain America: The Winter Soldier includes some of Black Widow’s origin story, which eliminates the need for any potential Black Widow movie to follow the old-fashioned superhero genre mold.

With the success of Agents of S.H.I.E.L.D. and the recent announcement of a Peggy Carter TV series, Marvel has proven that they can launch new franchises from characters far more obscure than Black Widow. And since Captain America 2 will be Scarlett Johansson’s third big-screen appearance in the role, it should be a cinch to give her a movie of her own.