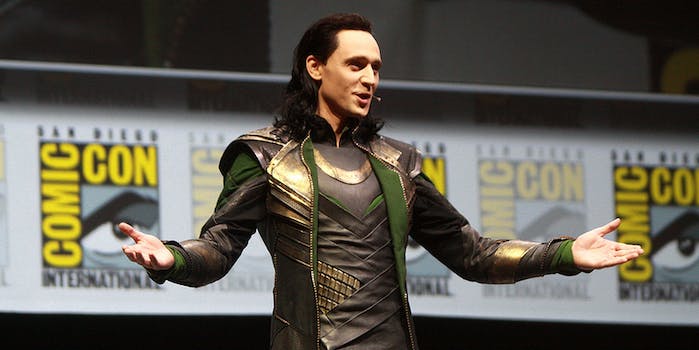 There’s a quote from an old Vulture article doing the rounds on Tumblr at the moment, about the first casting announcement for Marvel’s Thor in 2009.

“Despite rumors that had everyone from Shia LaBeouf to Josh Hartnett being cast in Kenneth Branagh’s version of Thor,” it reads, “two virtual unknowns will instead be handed the keys to the Marvel franchise.” The accompanying photo of Tom Hiddleston is about an inch tall, and makes him look like like a twelve-year-old.

But four years later, Hiddleston is on the front lines of Marvel’s gargantuan PR juggernaut, perhaps even surpassing A-lister Robert Downey, Jr. It’s hard to imagine what would’ve happened if Shia LaBeouf had ended up as Loki, but we’re pretty sure Tumblr’s Shakespeare-loving, Marvel fanatic fanbase would not have latched onto him to quite the same extent.

When you look at the publicity interviews for Thor in 2011 (now immortalized in GIF format all over the Internet), you get the impression that no one was really aware of the gravity of the Hiddleston situation. They hadn’t yet realised that, while Chris Hemsworth is widely regarded among Marvel fans to be an excellent Thor, his on-screen brother would become the real star of the show. It didn’t take long for them to catch on, though. Despite only being onstage for about three minutes total, Hiddleston was one of the highlights of San Diego Comic Con 2013, arriving in full costume and delivering a speech in-character to 8,000 adoring fans.

We’ve written before about the popularity of the misunderstood male anti-hero in female-led Internet fan culture. With Hannibal at one end (almost totally evil) and Sherlock Holmes at the other (potentially unlikeable, but mostly “good”), Loki is somewhere in the middle. He’s angsty and occasionally cruel, but with a complex emotional core that just begs to be extrapolated upon in a multi-chapter fanfic. Avengers fandom boasts a pretty wide variety of fanfiction genres, but Loki probably has the greatest number of lengthy “gen” (“general,” or not focusing on romance) stories dedicated to his character. Fandom loves him. And since Hiddleston had a lot to do with the onscreen construction of the character, fandom loves him as well.

In the world of superhero movies, villains don’t tend to last very long, and they’re rarely the most interesting characters. Loki is unusual in that he’s recently returned for his third appearance in the Avengers franchise, and fans were eager to see him show up every single time. In fact, several extra Loki scenes were added to Thor: The Dark World during post-production, partially influenced by Hiddleston’s own ideas about the way his character arc should play out. 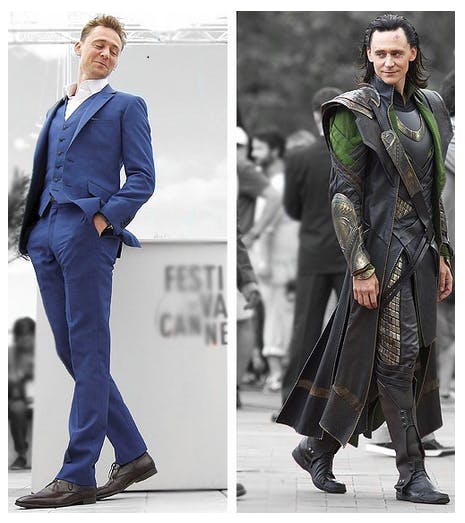 There’s also the fact that Hiddleston is so infamously obsessed with Loki’s tragic backstory that many people couldn’t tell whether he was actually crying on on the red carpet for Thor: The Dark World or just kidding around.

The magic of the publicity tour

Most Hollywood movie press tours are an exercise in repetition, with the actors usually looking like they’ve lost the will to live by the time they reach the final interviews. But with geek-culture franchises like Star Trek or The Avengers, the publicity tour is half the job. Every member of the Avengers cast has endeared themselves to fandom in some way—Chris Evans with his goofy charm, Scarlett Johansson with her feminist quips, Robert Downey, Jr. by being Tony Stark in real life—but Tom Hiddleston gives every impression that going on publicity tours is his favorite thing in the world. It’s as if someone created a bizarre mutant hybrid that mixes a super-perky cheerleader with a serious Shakespearean actor.

The result is pure PR genius. Particularly when your audience is Marvel fans who will happily drink down every last detail of canon information the actors are willing to give.

Sometime between the beginning of the Avengers press junket in 2012 and the release of Thor: The Dark World this Fall, someone at Marvel realised that Tom Hiddleston will do seemingly anything in the name of publicizing his movies. This is why we now have not just one, but multiple YouTube clips of him dancing for rooms full of screaming fans. And a TV commercial where he hangs out with elementary school kids while dressed as Loki. Not to mention all the hilariously accurate impressions he can do of his fellow Avengers actors.

In South Korea, he filmed a TV segment that was essentially just him taking the interviewer, a K-Pop star named Tiffany, on a date straight out of a romance movie. Even heterosexual male journalists somehow find themselves being rowed down a river by Tom Hiddleston instead of doing a normal interview, and inevitably succumb to writing about how dreamy he is.

By the time the new Thor movie was in general release, Hiddleston looked utterly exhausted, but he still smiled while juggling and singing on a tour of Berlin. And this was on top of filming an MTV interview in the style of a sleepover, where he played fuck/marry/kill between Idris Elba, Chris Hemsworth, and Anthony Hopkins, and ended up in a pillow fight with the interviewer. All Chris Hemsworth and Natalie Portman had to do to promote the movie was go on late-night talk shows and seem enthusiastic.

So while Hemsworth may look like a Disney Prince, Tom Hiddleston seems to actually act like one in real life. The fanboy version of one, anyway. He’s the equivalent of One Direction for geeky women who want to hear his opinions on Hamlet and his psychoanalysis of the Norse god of mischief.

Plus, Hiddleston is basically a walking GIF factory. Just look at the meme where he’s accidentally groping people. Or the one where he’s dancing in the background of your favorite movies and TV shows. Or all those GIFs of him sensually licking a popsicle made of human blood. Wait, maybe that one requires a little more explanation.

The perfect movie career for Tumblr

Between them, the Tumblr-beloved cast of Sherlock have managed to move in on The Hobbit franchise and the most recent Star Trek movie. And yet still, somehow, Tom Hiddleston is in the lead of the Tumblr fandom popularity contest. That’s partly down to the press tour thing (Tumblr’s other favorite British heartthrob, Benedict Cumberbatch, isn’t known for a love of interviews), but also because he picks such esoteric roles.

Just before the release of Thor: The Dark World, Hiddleston attended various independent film festivals to promote his latest movie, Only Lovers Left Alive, in which he and Tilda Swinton play a pair of immortal, vampiric lovers (hence the blood popsicle GIFs). It’s safe to say that as soon as that movie is in general release, the Internet is going to explode with Swinton/Hiddleston vampire fanfiction.

Hiddleston’s career trajectory right now is verging on the surreal. He could have his pick of roles, but his next movie is a straight-to-DVD Disney spinoff cartoon about Tinkerbell. He’s voicing a young Captain Hook. No one’s really sure if this is something he signed up for before he got famous or if he just really wanted to be in a straight-to-DVD Disney movie about Tinkerbell. It could go either way. After all, he’s already appeared on camera with Miss Piggy and the Cookie Monster, and has a cameo in the next Muppets movie.

Meanwhile, he’s about to start a sold-out stage run in London as the title character in Shakespeare’s Coriolanus, a performance that will be broadcast live to cinemas across the U.K. Perhaps it’s thanks to the Kenneth Branagh connection (Branagh directed the first Thor movie), but there’s a lot of overlap between Loki/Hiddleston fans and people who will sit with their finger on the button at 10am to bid for cut-price Shakespeare tickets. When some Coriolanus tickets went on sale last week, the theatre’s website crashed and they sold out within seconds.

Aside from the power of comics fandom and Hiddleston’s ability to generate the perfect GIF, the main thing he’s done to cement his popularity on Tumblr is, well, something he hasn’t done. He hasn’t done anything offensive.

One of the only real certainties in Tumblr fandom is that there will be backlash against everything. Benedict Cumberbatch has his fair share of haters for taking on the role of Khan in Star Trek Into Darkness, and therefore tacitly endorsing the Hollywood habit of whitewashing characters who were previously played by people of color. Even director Joss Whedon, who in mainstream geek culture is almost akin to a deity, is regularly criticised in Tumblr-based fandom for not being as feminist as he claims.

Tom Hiddleston, on the other hand, has managed to sidestep controversial subjects and come across as almost universally likeable—surely a far more difficult skill than doing a velociraptor impression or charming a Korean pop star. Perhaps he should go into politics.