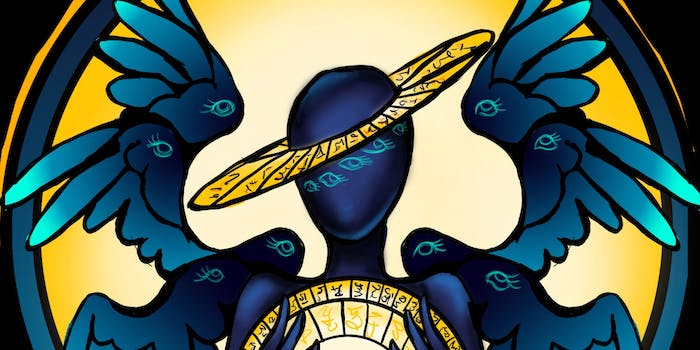 Divination was never this much fun.

Divination tools have been around for centuries, but few have fascinated us like the mysteries and wonders of the tarot. Beginning with the famous “Fool” card of the card’s trump suite, called the Major Arcana, the tarot takes its users on a narrative journey from innocence to ultimate wisdom, complete with adventures, challenges, setbacks, sorrows, and joys along the way. 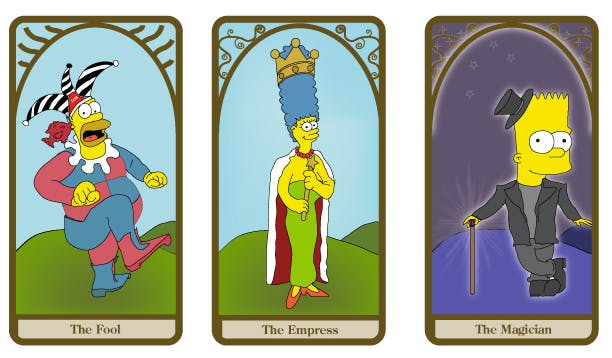 Detail from the Simpsons Tarot Deck by dustbean11, depicting the Simpsons family as cards of the Major Arcana tarot suite.

Throughout the centuries, tarot lovers have applied its themes to their own lives, often by using familiar images of the world we live in to stand in for the iconography of the decks. In recent years, the rise of fandom culture has allowed for an entirely new and beautiful trend in tarot cards: fandom tarot decks that allow us to explore our favorite characters and fictional worlds in intricate new ways.

Although they come from an esoteric tradition, tarot cards are proving increasingly popular among fans who want to explore interpretations of their fandoms while creating beautiful art. 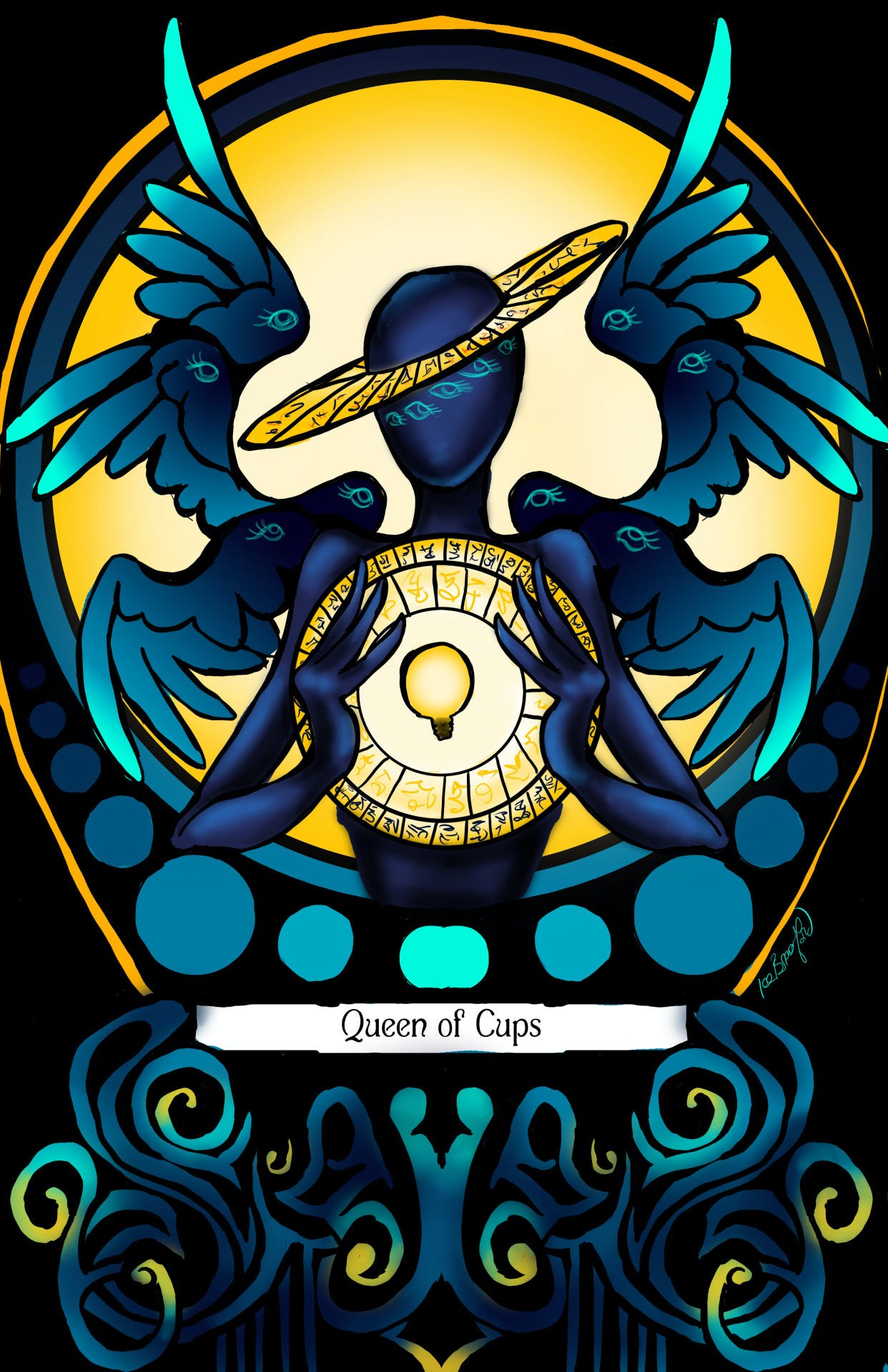 The most famous tarot cards are the 21 cards in the Major Arcana. These 21 cards represent major events and themes in the life of an individual, and many of them are so well known in our culture (The Fool, Death, the Tower, the Wheel of Fortune, just to name a few) that they essentially stand alone as iconic cultural images all by themselves.

Additionally, many of the major arcana cards, taken by themselves, represent various figures and personality archetypes. Here’s a comparison of the well-known image of the Fool from the Rider-Waite tarot deck, the most famous tarot deck, and its counterpart from a Star Wars tarot deck by Eisner-nominated comics artist Elan’ Rodger Trinidad: 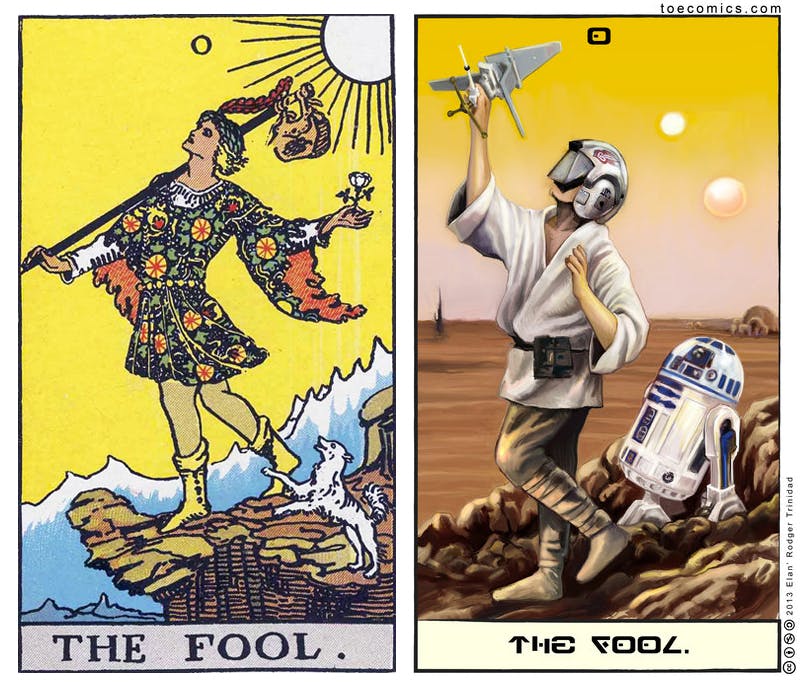 Illustration by Elan Rodger Trinidad / Theory of Everything

Trinidad explains how Luke Skywalker and the journey he undergoes in the Star Wars series are actually a perfect representation of the fool’s journey through the major arcana:

[I]n our card, young Luke Skywalker walks on his path blindly. In some Tarot, The Fool is sometimes blindfolded or said to be blind. Our New Hope is naive and plays with a toy T-16 Skyhopper… He has no idea what the rewards and hardships of being a Jedi mean. But by the end of Return of the Jedi, do you think he ever regretted taking that first step?

Tarot decks evolved from regular playing cards, which is why the tarot deck also has four regular suites called the Minor Arcana—wands (clubs), cups (hearts), swords (spades), and pentacles (diamonds). The suites also have royal “face” cards like a regular deck. The oldest known tarot decks date from 15th-century Europe, where they were used to play regular, point-based card games.

Though the tradition of tarot has typically been about “fortune-telling,” many enthusiasts use the cards for other things, like meditation exercises, development of writing ideas, personal reminders, and even as regular playing cards. 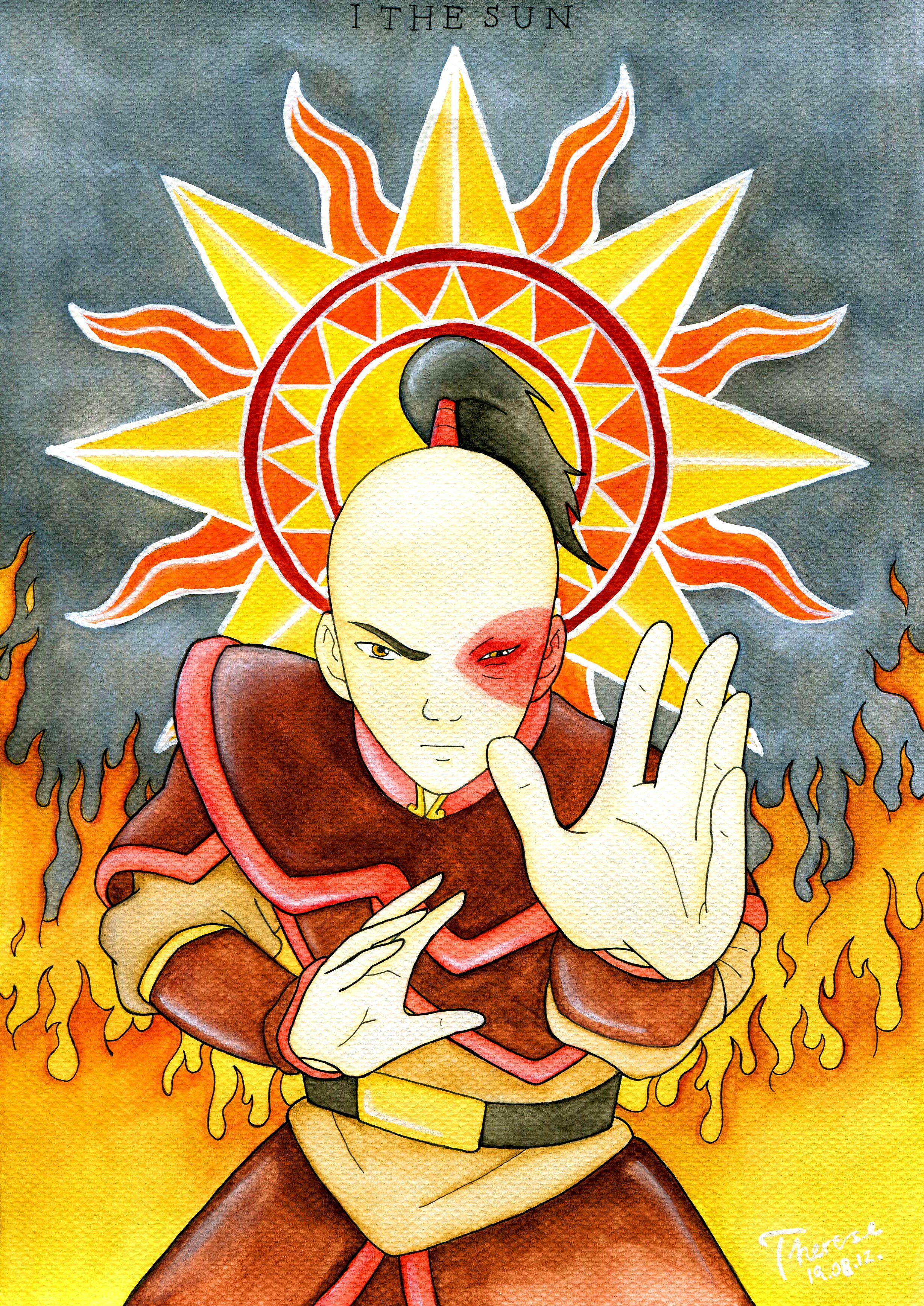 The character Zuko from Avatar: the Last Airbender as the major arcana card The Sun

In fandom, the use seems to be primarily about deepening one’s understanding of the fandom and the tarot by working out which characters represent which cards. Many fans only do one or two cards to correspond with their favorite characters or themes. Deviantart artist clothofspindle has only done one Game of Thrones tarot card, but it’s a good one: the longsuffering warrior Brienne of Tarth representing the 10th card of the Major Arcana, Strength: 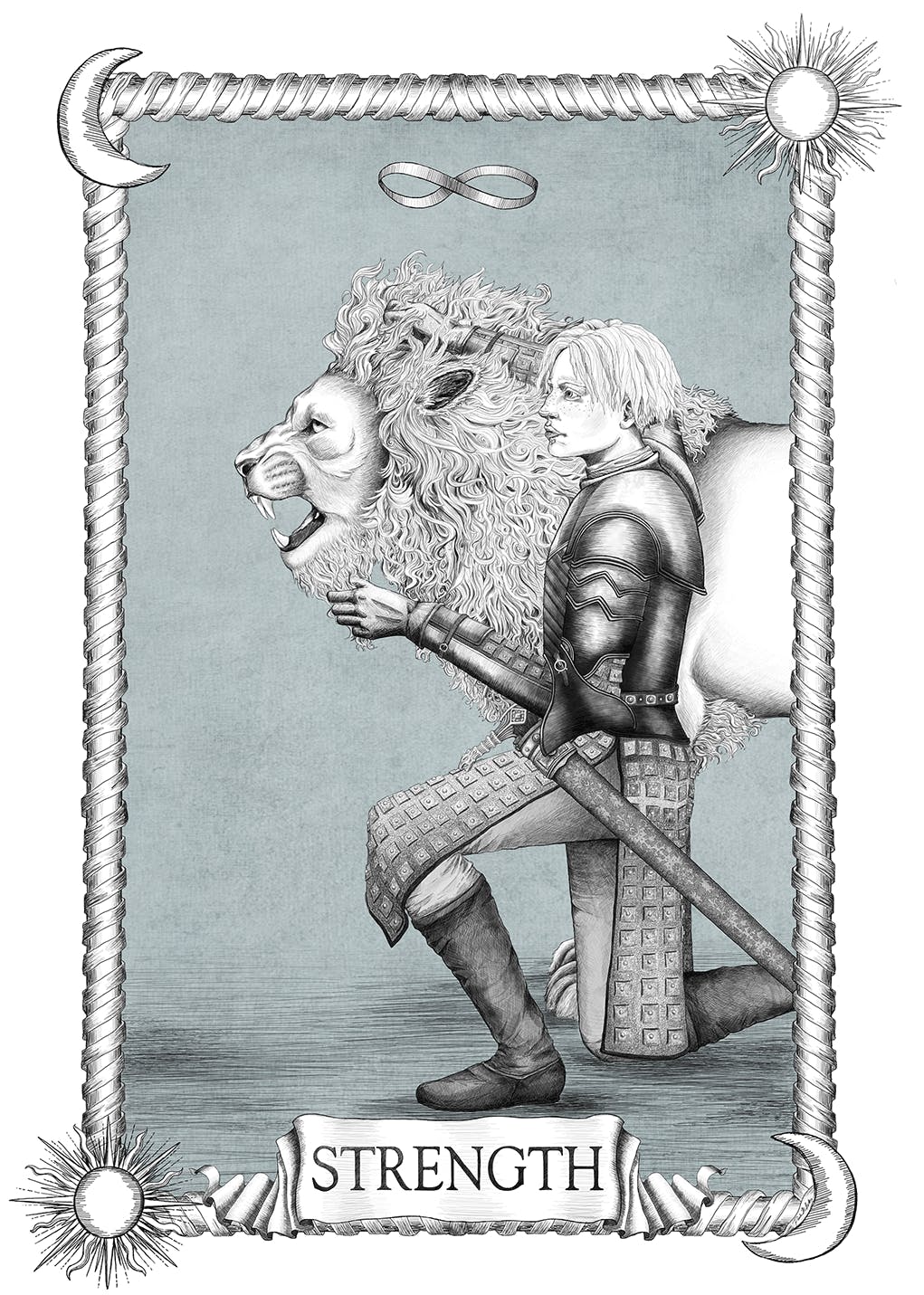 Many fans content themselves with doing just the cards of the Major Arcana, exploring the various traits associated with each character through the archetypes. Often this reproduces symbolic relationships between characters in various stories—like this juxtaposition of the characters L and Light from the popular manga/anime series Death Note, by artist 7point7. 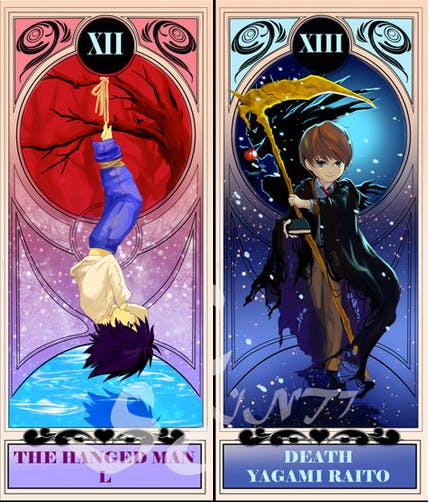 In the anime, L and Light are frequently contrasted against each other and shown in parallel. Here, they’re shown as side-by-side cards in the deck. Light represents the god of Death, as he does in the series, while L represents a moment of extreme inability to act, a major Hamlet-esque aspect of his character.

Here’s another instance of character relationships being amplified through the tarot cards. The three main characters of Naruto are shown in this piece by risachantag as three Major Arcana tarot cards, the Star, the Sun, and the Moon: 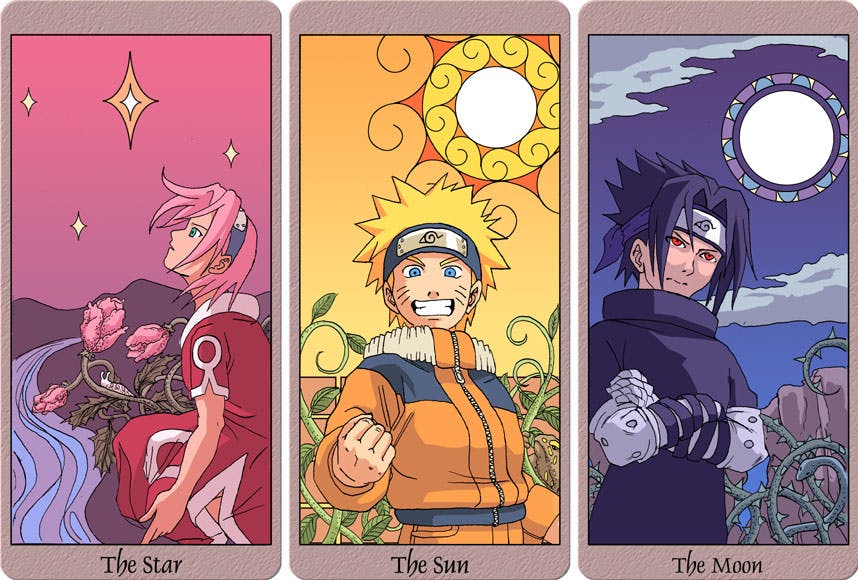 “I can’t believe how well those three fit into those roles,” risachantag wrote. Like many fans, she decided to do her cards on a whim, without really knowing much about tarot itself. Often fandom is a good way for fans to explore tarotology and other arcane practices. Other times, fandom is an extension of an individual’s already deep love for tarot.

Deviantart user Southparktaoist has been working on a full tarot deck for his fandom, My Little Pony. “I am a big fan of tarot and tarot history, and actually incorporate the symbolism into my art and writing,” he said. 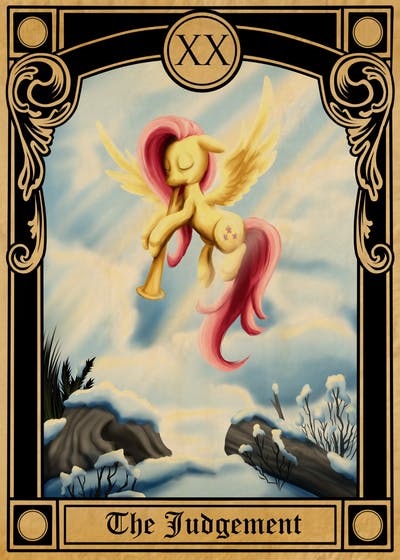 SouthParkTaoist, who was raised Taoist and has long been used to mystic structures and symbolism, got into tarot through the classic Alan Moore comic Promethea, which devotes an entire issue to a theme based on the Major Arcana. “I noticed the structure of the Major Arcana is a good template for measuring any stretch of history,” he said. Like many other tarot users, he uses the Major Arcana to help outline stories, and has even developed an academic presentation called “100 years of narrative art: from Peter Pan to My Little Pony” which uses the archetypes of the Major Arcana to trace a cycle of narrative literature from the early 20th century to today.

As for the pony deck, he said form followed fandom:

I started the MLP Tarot Deck specifically because it was the first time I was drawing fanart and first time I was involved with a fandom. The Derpy the Fool card was my very first piece of pony fanart (very symbolic as Fool represents start of a journey and it was Derpy that basically started the Brony fandom and my journey into drawing pony art). Since then it look me roughly 2 years to get the remaining cards done and its really nice to see my art improve over this time, laying all the cards out is a nice little timeline of how my art abilities have progressed since I first started.

He recently revealed a preview of the Minor Arcana for his deck, which he hopes to sell at various brony conventions. 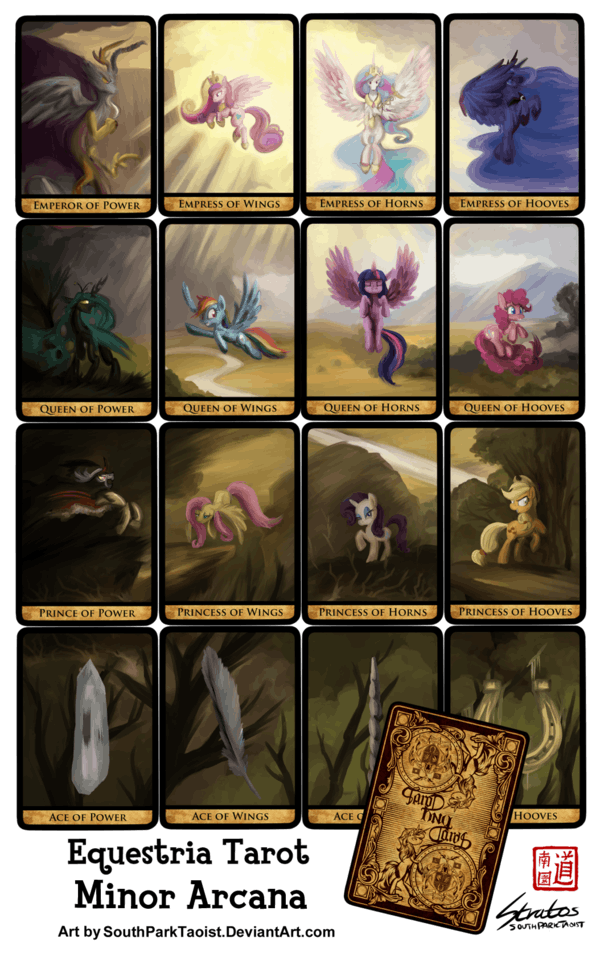 Another artist, Ellygator, was already a huge tarot enthusiast when she decided to take on the intimidating but ultimately worthwhile task of creating an entire tarot deck based on the Harry Potter series. 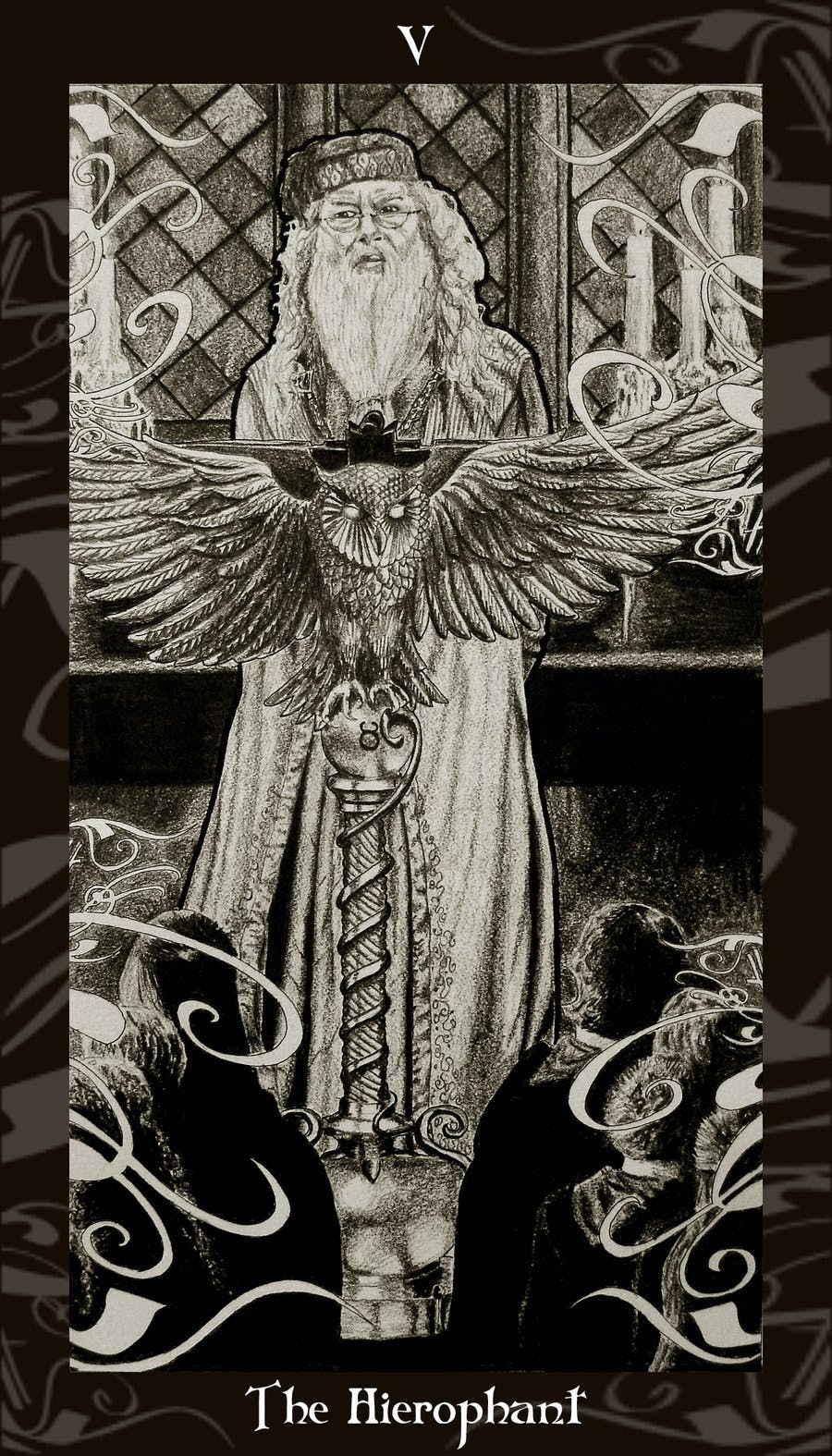 “I’ve been working with the cards for nearly 30 years and have quite a few decks with a wide variety of themes,” Ellygator said. “So it seemed only natural to me to clothe an exciting experience like immersing myself in the Potterverse in terms of the Tarot.“

JKR made it easy, too, for example with the 4 houses having such strong elementary affiliations and using so much classical magical reference in her books (although augmented with a host of lovely inventions of her own). 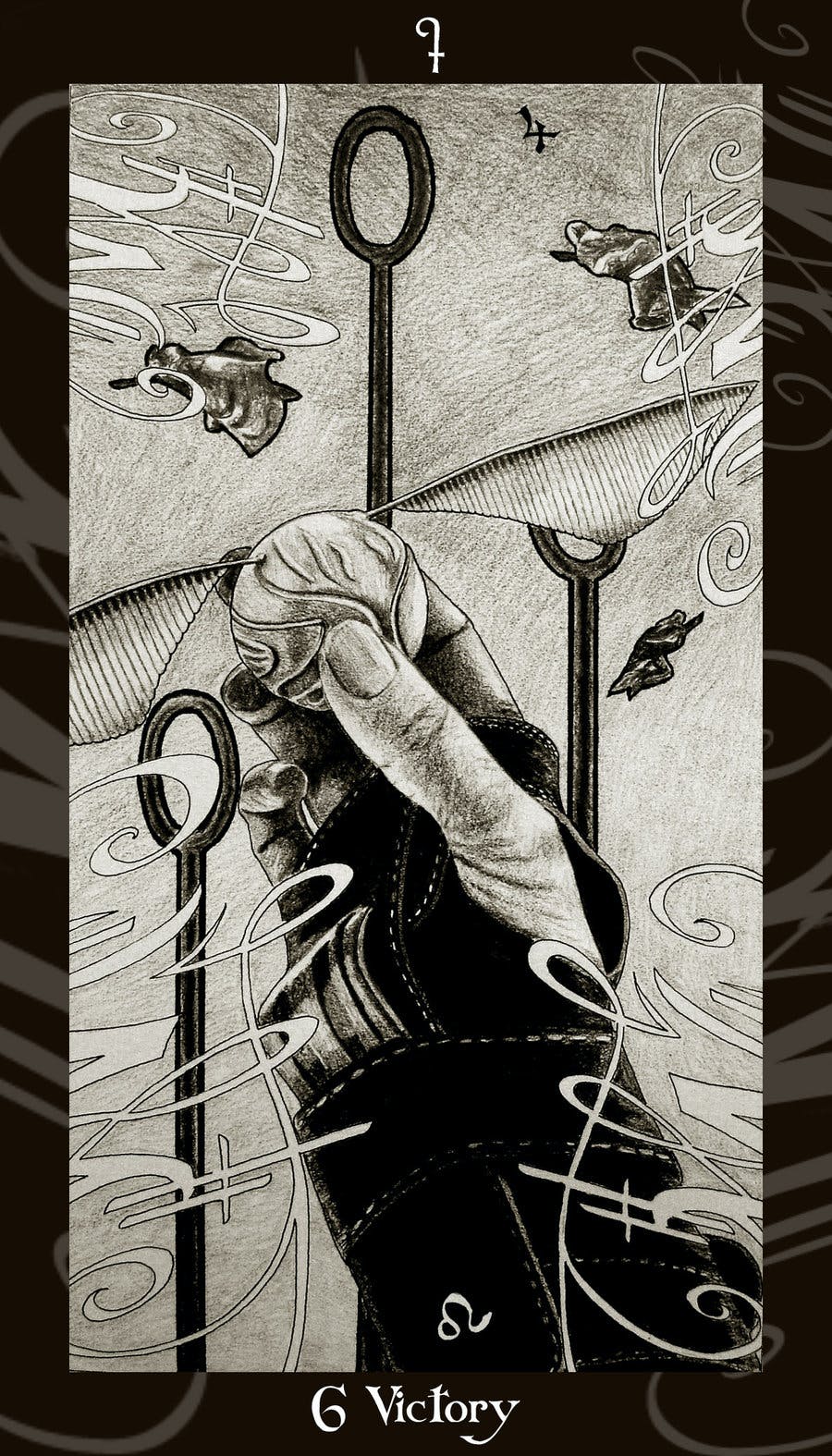 A Quidditch victory as the Minor Arcana Six of Wands

Ellygator recalled that “at some point it became more of an active challenge to see if what seemed just glimpses or a personal frame of reference could be made to fit [into the tarot themes].”

I still recall making up a spreadsheet with the Major and Minor Arcana in one column and then starting to try and fill out the column next to it with people and events from the books, just as an exercise…At some point when I still had some blank spots on my list I started drawing, because the temptation was just too great. Lucius was my first card, then Narcissa, Draco and Pansy. I guess at that point I’d done it and remember the day I committed in my mind that I’d see this thing through. It’s still the biggest project I’ve ever done.

The act of creating personal tarot decks has been around for centuries. In recent years, customized decks have become so popular that you can create and order your own designs from some printing companies. As a fandom hobby, the practice got a boost with the 2012 Kickstarter campaign for the massively popular webcomic Homestuck. One of the most popular perks was a Homestuck tarot deck featuring contributions by a large number of fanartists. The Tumblr blog homestucktarot-readings offers to do readings for fans using the deck: 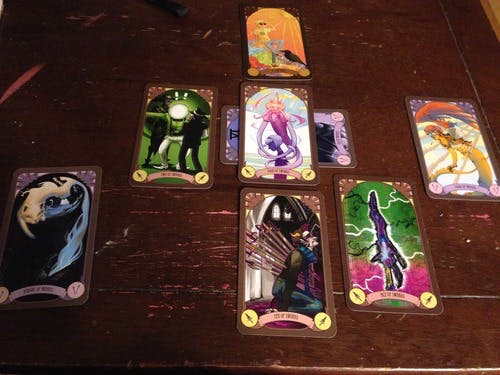 More recently, the inclusion of tarot-like cards in the popular Dragon Age: Inquisition (DAI) has led to the trend of creating tarot cards or similar themed cards for the fandom. 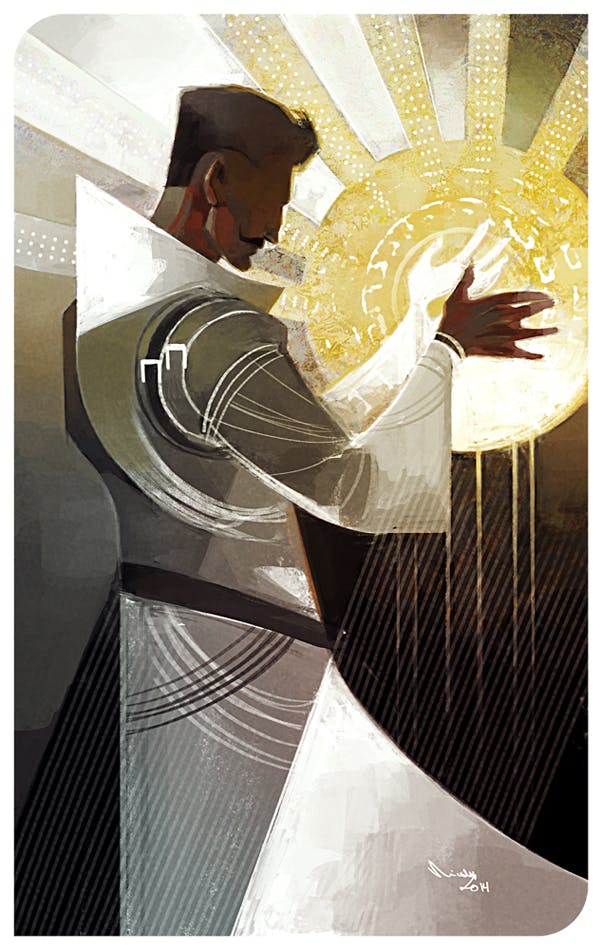 The Dragon Age character of Dorian Pavus as The Sun 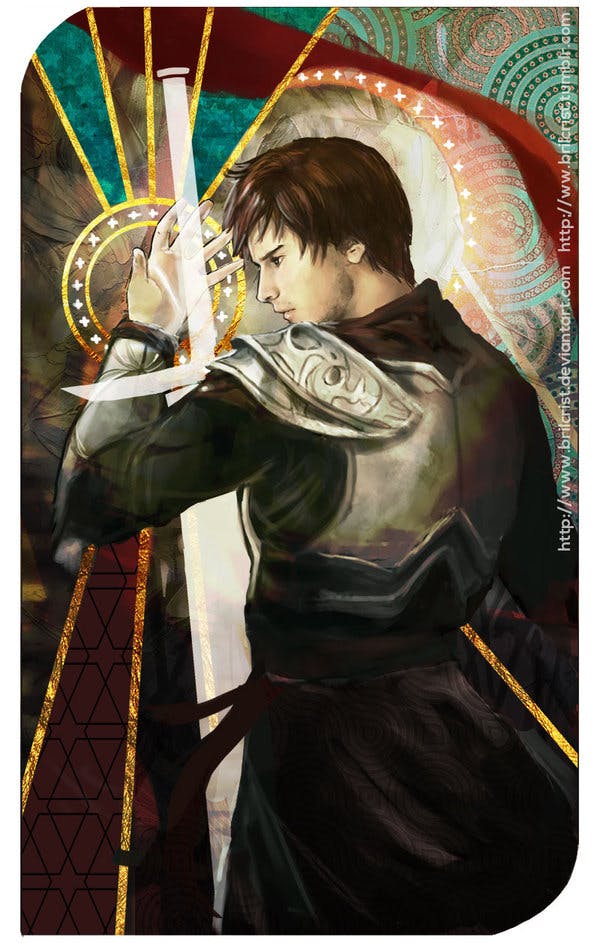 A non-traditional tarot card for the Male Inquisitor from DAI

On Tumblr, user cuddlingthecthulhu is in the process of using one DAI character, Anders, to illustrate three different cards from the Major Arcana, aligned with the three different acts of the game. 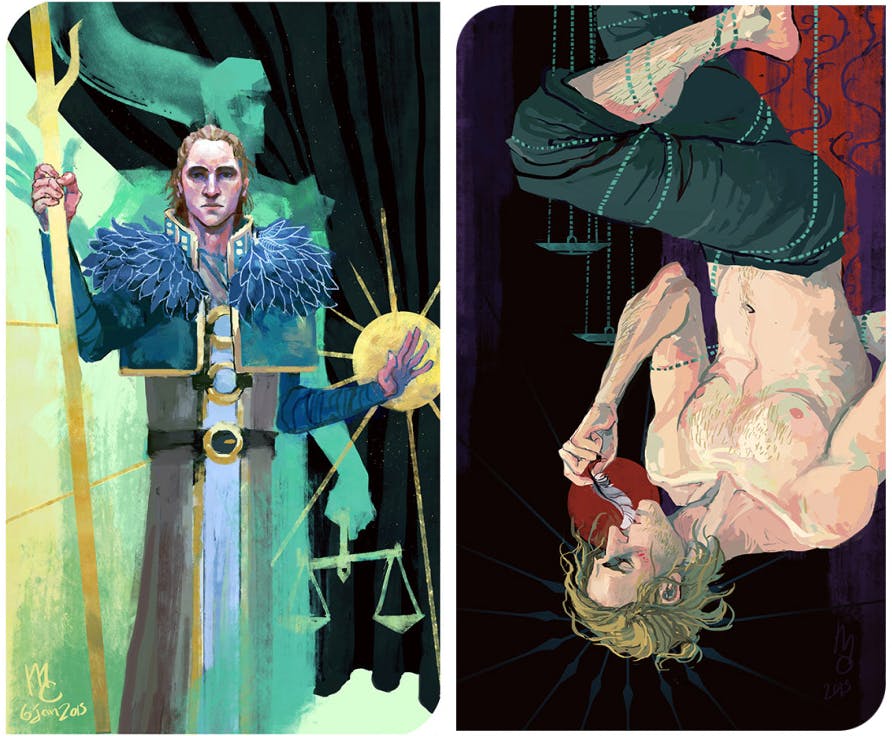 While many of the most popular decks are for extremely well-known fandoms, many decks derive their appeal from a combination of fandom and art. Deviantartist eldarienne’s deck for the fantasy series The Chronicles of Amber (also on Facebook) uses a combination of characters from the books and original characters belonging to her and other members of the fandom. The result, as you can see from the suite of swords for the deck, is still a powerful, striking example of tarot: 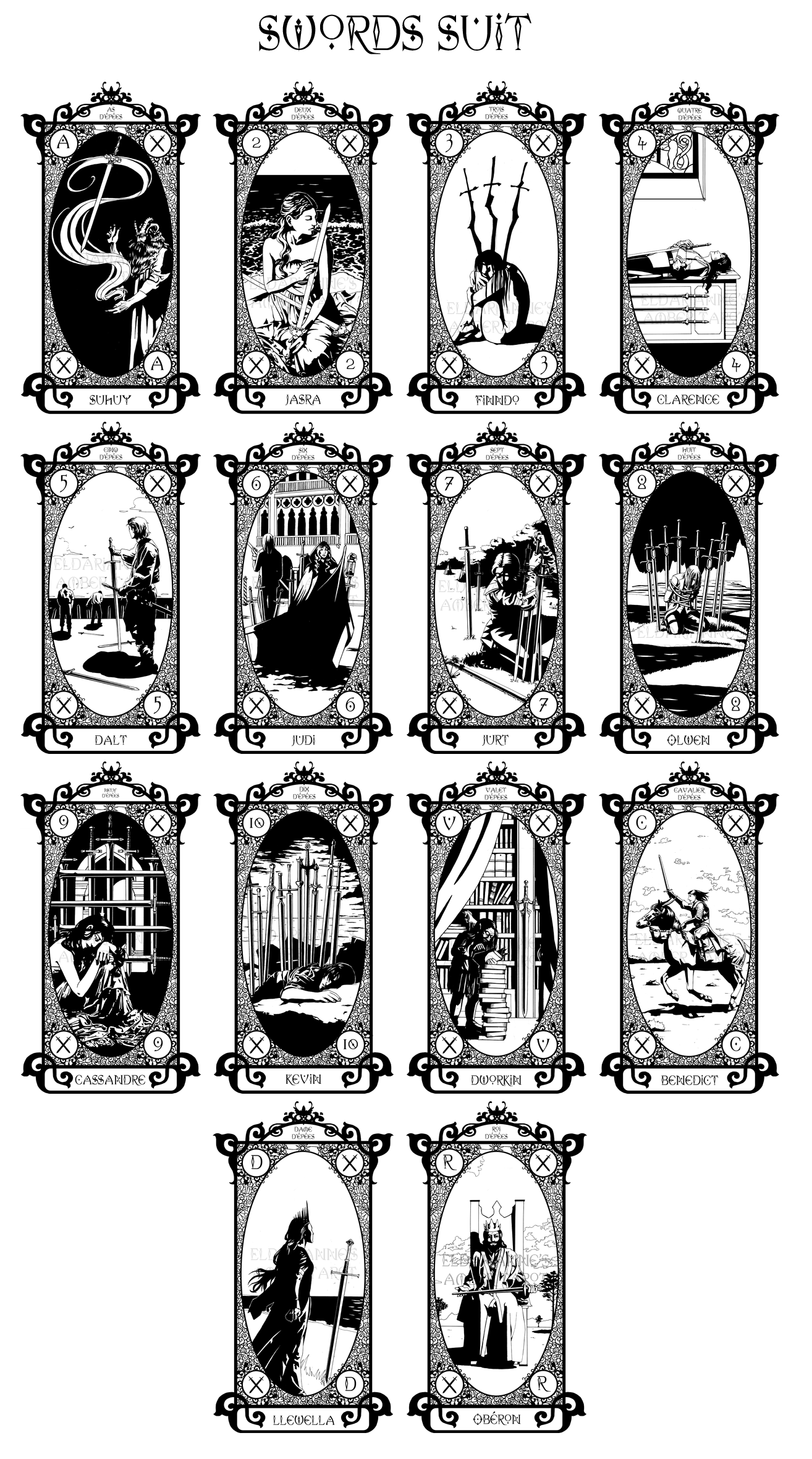 Fans also use the decks for their own sources of writing and art inspiration. Often the decks are fandom-specific in ways that may not make sense to anyone outside of the fandom, but still convey the complexity of the story: 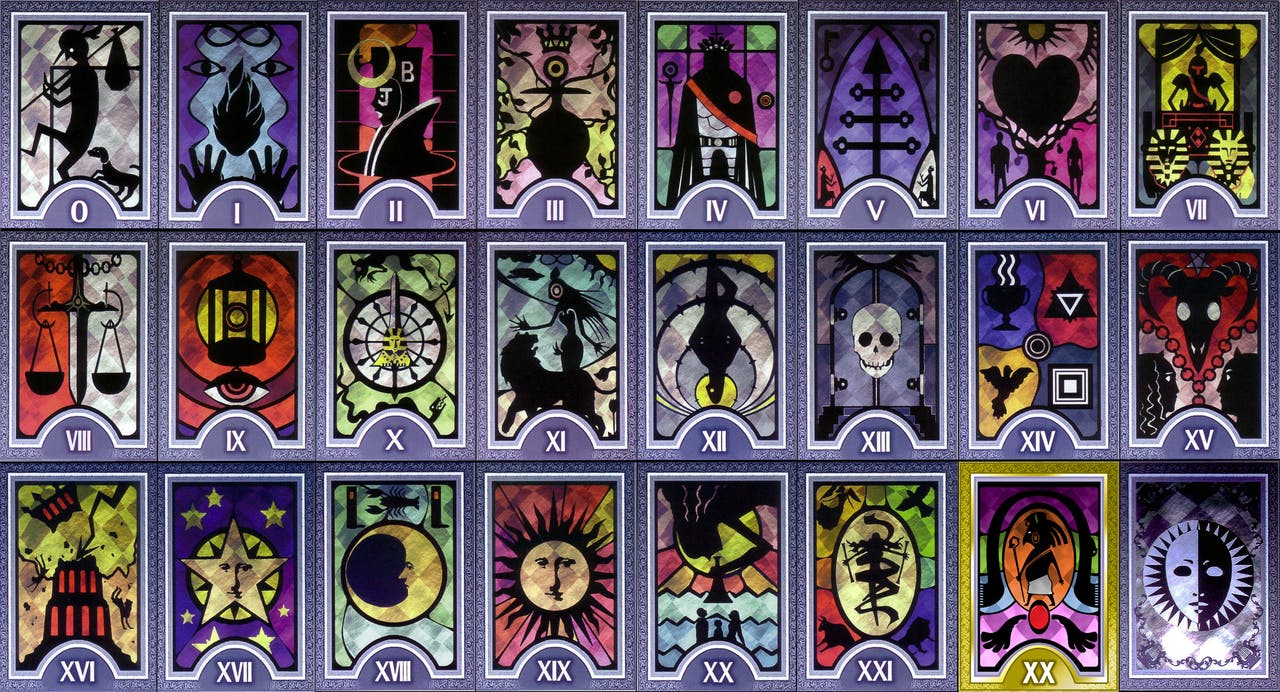 Tarod deck based on the popular Persona game franchise 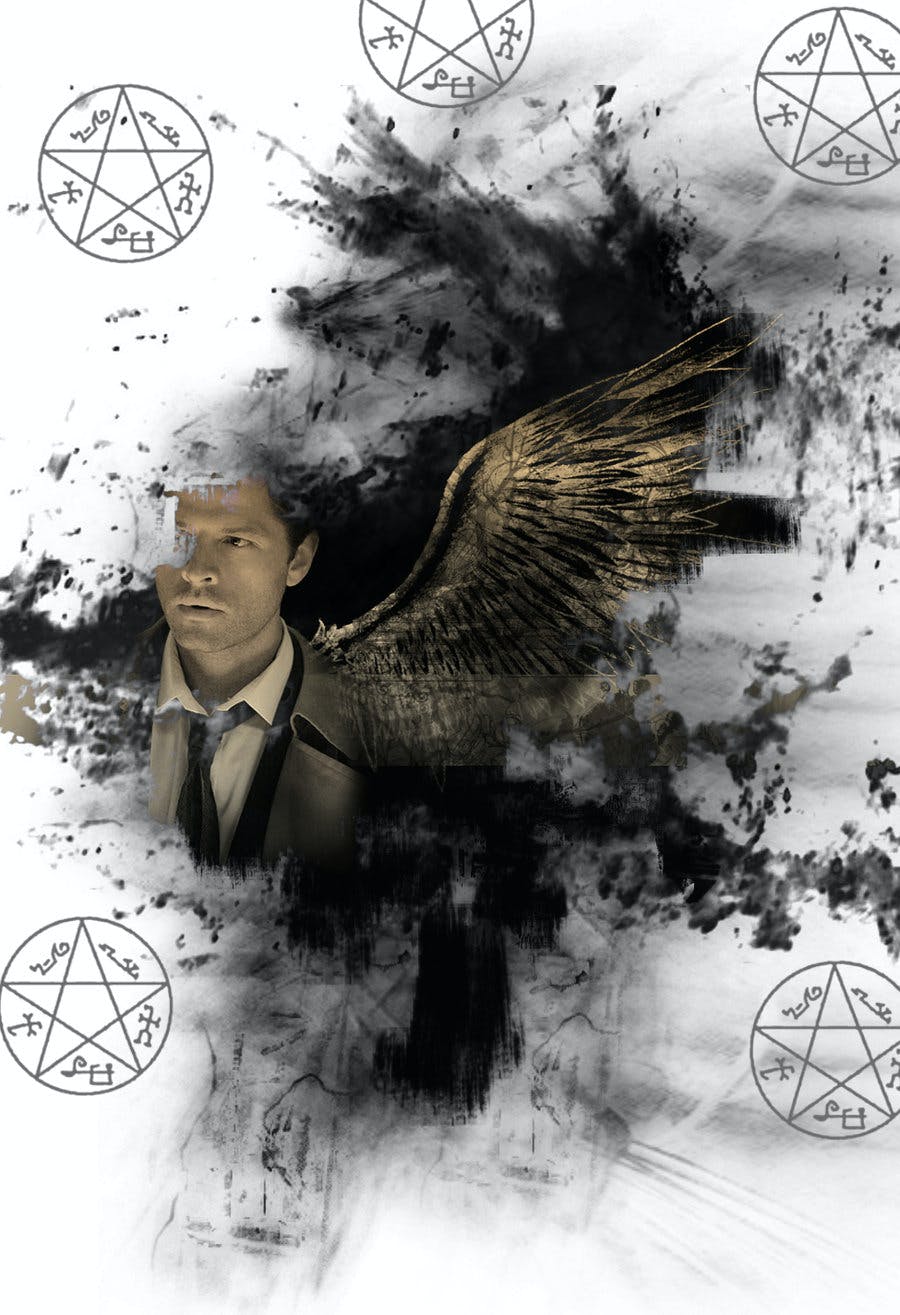 Whether the tarot is a way to further explore the fandom or whether the fandom is a way into the tarot, the makers of the tarot decks often come away with a deeper understanding of both.

“In the end,” Ellygator said about the process of making her deck, “it felt like every card could not have been anything else, that for me I had got it 100 (percent) right and honest…The deck was as good as I could give to do an awesome series of books and characters justice… Overall it was an immensely satisfactory experience.”

Satisfactory for the artist—delightful for the rest of us.