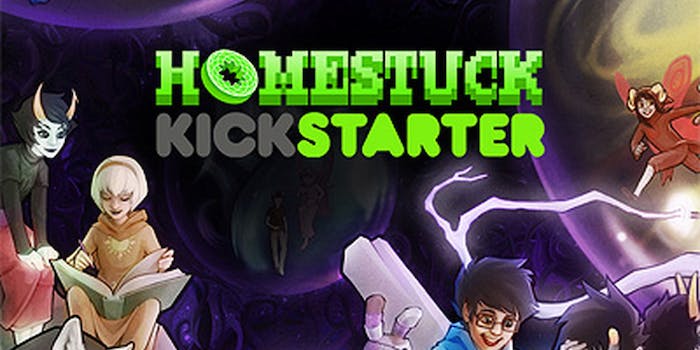 The next big Kickstarter project is something you've likely never heard of: a video game adaptation of the cult webcomic hit Homestuck.

The next big Kickstarter project is something you’ve probably never heard of.

The project, Homestuck Adventure Game, will be a classic role-playing video game inspired by Homestuck, a webcomic with a cultish following of over 1 million fans. Although the webcomic is virtually unknown by outsiders, the Kickstarter raised nearly $600,000 in less than 24 hours.

Andrew Hussie, the creator and author of Homestuck, said he plans to work on developing the game after he concludes the webcomic in 2013.

“Homestuck, like all other stories on [Hussie’s website] MS Paint Adventures, was built on extensive parody of video games, most notably classic adventure games,” Hussie wrote. “So for the project after Homestuck, I think it would not only be fitting, but quite exciting to present the story in the form of an actual adventure game.”

Retro role-playing games are notoriously lengthy and complex, but even the most side-quest ridden Final Fantasy saga is nothing compared to Homestuck’s hundreds of main characters and labyrinthine plot. For that reason, Hussie said the game will be only a loose adaptation of Homestuck the comic.

“Homestuck’s structure is very open, which suits a highly exploratory piece of freeform media with a huge cast and many silly tangents,” he wrote. “I’ll use elements from Homestuck that I think will be interesting to expand upon in something new, likely with minimal relevance to Homestuck comic canon. Beyond that, things are pretty up in the air as far as plot and characters go.”

But many questions remain unanswered: Which game company is developing the game? Which characters will be in it? And for the love of SBURB, will the game be any easier for outsiders to pick up than the comic is?

Hussie has not yet responded to the Daily Dot’s request for comment.