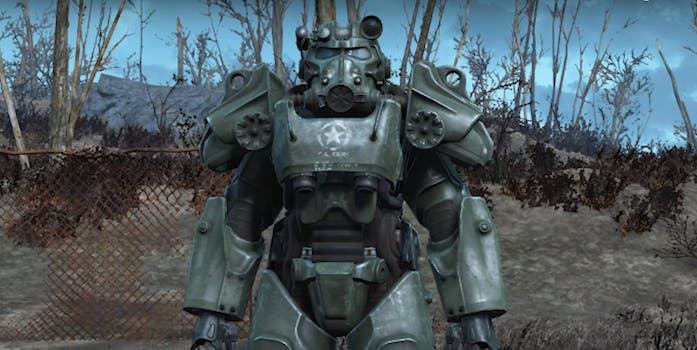 Now that Norway has Fallout's T-60 Power Armor, can anything stop them?

Trump announced on Wednesday that the U.S. had sold a number of “F-52s” to Norway.

“In November we started delivering the first F-52s and F-35 fighter jets,” Trump said, standing alongside Norwegian Prime Minister Erna Solberg. “We have a total of 52 and they’ve delivered a number of them already a little ahead of schedule.”

The only problem? The F-52 is a fictional plane that only exists in the Call of Duty video game series.

Perhaps the president was just confused by so many numbers being in his prepared statement—or maybe he just loves Call of Duty? The Washington Post, who first ran the article, received no response when it reached out to White House press secretary Sarah Huckabee Sanders for comment.

Not to be outdone, the team behind Fallout, the popular post-apocalyptic video game series, tweeted it would be pitching in by sending Norway some of its famous T-60 power armor.

That’s pretty generous since it’s some of the best armor in the game (although considering the destination, they might have been better off going with the winterized T-51b).

Twitter was quick to applaud the move—but also had some questions.

did you remember the fusion cores?

As long as we kept Liberty Prime, we’re Gna need it. 😂 pic.twitter.com/k8Qar5nLK6

I forget, which country did we send these to? pic.twitter.com/aDlzNQcdhK

Hopefully, the makers of the Elder Scrolls series will follow suit and send over the Mace of Molag Bal. It’s the perfect tool for taking down all those pesky frost giants you encounter in Norway.