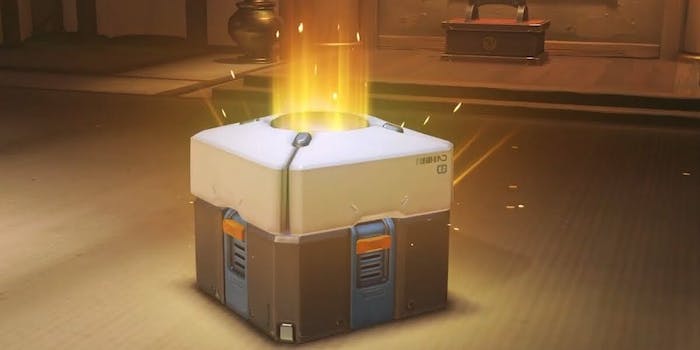 But will it be enough?

A loot box controversy has been brewing in the video game world for some time now. Amid potential legal action from lawmakers, the Entertainment Software Rating Board (ESRB) says it will begin labeling games that contain in-game purchases.

The new label will apply to any game that lets players spend additional real-life money within the game itself. That includes games with downloadable expansion packs as well as games that offer loot boxes. Loot boxes are in-game items that contain a randomized assortment of digital goodies.

The new label will be separate from the rating labels for which the ESRB is best known. Those include “E for Everyone,” “T for Teen,” and “M for Mature.”

An update on in-game purchases from your friends at ESRB: pic.twitter.com/pqmfJe0Ywz

Additionally, the ESRB has launched a website to help parents limit how much money and time their kids spend on video games. It offers step-by-step directions on how to set limits for every major gaming platform on the market.

These changes are the result of fan outcry over in-game purchases found in many recent games. The biggest, most recent incident revolved around Star Wars Battlefront 2 when fans discovered players who spent real money on loot boxes would likely gain competitive advantages over players who didn’t. The backlash grew so fierce that publisher Electronic Arts scrapped in-game purchases entirely on the eve of its release.

Before long, lawmakers began looking into the possible ties between loot boxes and gambling. Hawaii lawmakers introduced several bills that would one, ban anyone under 21 from buying games containing loot boxes; two, require game makers to disclose the odds of what loot boxes might contain; and three, require a bright-red warning on games that offered loot boxes.

In a call to reporters on Tuesday morning, ESRB President Patricia Vance said, “If you care about parents, if you care about their concerns, this is an effective response.”

But is it? One potential drawback for the ESRB’s new “in-game purchases” label is that it’s too broad. Nearly every major game coming out these days offers some kind of in-game purchase or a series of downloadable expansions. The labeling system makes no distinction between games that offer single-purchase expansions and ones that let you buy unlimited loot boxes. The fan outcry has focused on games with loot boxes, not games with expansions.

“We are going to continue to look at this issue and determine if there are additional measures or guidelines to put in place,” Vance said. “This obviously an issue of concern to the gamer community.”