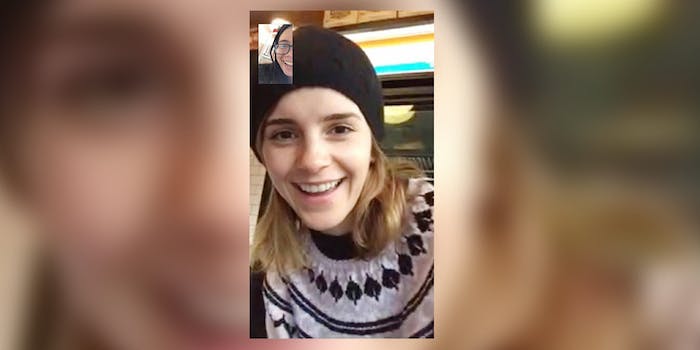 When it comes to fan interaction, Emma Watson is in an [Ivy] league of her own.

Ten points to Gryffindor! Actress Emma Watson reinforced a fan’s diligent studying when she popped into a FaceTime chat with the fan’s mom.

Therese Kiara had skipped out on a trip into New York City with her mom to stay home and study for a big biology exam. But when Kiara’s mom ran into the Harry Potter star, she knew just the way to give her daughter a little extra motivation.

Hermione Granger was a straight-A student at Hogwarts (10 Outstanding OWLs!), but that character wasn’t too much of a stretch for Watson, who graduated from the Brown University with a degree in English literature in 2014. Most recently, she tapped that literature-loving inspiration again for her role as Belle in Beauty and the Beast.

Though the A-list celebrity has a strict rule about not taking photos with fans for security concerns, it seems she was willing to let her guard down a little to brighten the day of a fellow bookworm.