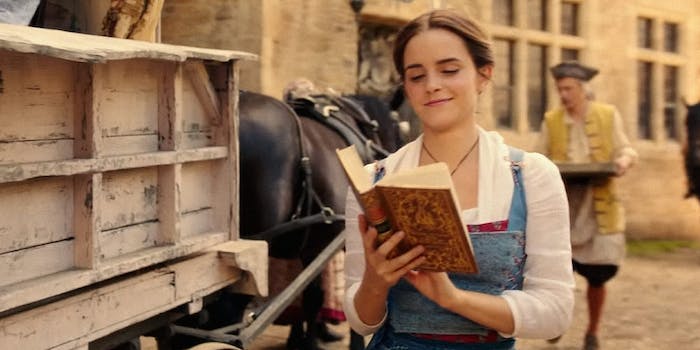 So did Belle’s town age in ‘Beauty and the Beast’ or what?

How far did the Enchantress' spell reach?

The live-action Beauty and the Beast attempts to course-correct some of the more puzzling aspects of the beloved, animated tale that came before it—like making Belle the engineer of the family—with varying degrees of success. But the curse as old as time is leading to questions of whether more magic is at work outside of the castle.

In an added layer of cruelty when the Enchantress placed her curse on an adult Prince and his castle (laying to rest the confusion about whether or not she cursed a 10-year-old), she also cursed the nearby village of Villeneuve. The villagers forgot the prince who taxed them to decorate his lavish castle for years on end. It’s not until the end of the movie we begin to realize that the Enchantress made family members of the Beast’s servants—Mrs. Potts’ husband Jean (Gerard Horan) and Cogsworth’s wife Clothilde (Haydn Gwynne) in particular—forget their own spouses.

Once the curse is lifted, Chip and the servants haven’t aged a day. So they didn’t age, but the reunions made one redditor wonder, did the village?

In a post shared on r/FanTheories, Hainted posited that not only did the village not age, they were stuck in a timeloop. It wouldn’t be a daily loop—some time has passed, indicated by Gaston’s lie that he spent five days looking for Maurice—but after a certain point the villagers would reset and never age. It would in part be possible because the Enchantress, who’s also known as Agathe, stayed in the village throughout the years.

“[Belle]’s able to walk through a crowded marketplace without looking,” Hainted wrote. “She knows exactly when everyone wakes up every morning. She talks about the baker having the exact same tray of goods every day.”

According to the theory, Belle and her father Maurice are immune from the curse because as the film reveals, they’re not originally from Villeneuve: They fled Paris when Belle was an infant as Belle’s mother was dying from the plague. So while they age the others don’t, which might in part lead to why the rest of the town thinks Belle is odd—besides Belle’s intelligence, ingenuity, and daring to teach a young girl how to read.

It’s less believable that Belle would’ve lived in a town for a couple of decades and not noticed that anybody has aged. She might not pay close attention to the other villagers considering that she doesn’t have high opinions of everyone, but that requires an implausible level of obliviousness. Even if she didn’t get along with everyone, she could’ve potentially noticed whether the boys she saw in the village ever grew up.

And where does Gaston, who onced saved the villagers of Villeneuve, fit into all this? Was he under their spell, or did he stay in town after becoming a local hero?

With the servants’ family members in tow, if you do believe the villagers aged, years passed but not enough for any of the affected family members to have passed themselves. (Some have taken Mrs. Potts’ exclamation that she’s waited 100 years to hug Chip again as indication that they had been cursed 100 years, but that could have also been hyperbole.)

It’s also possible that Disney wasn’t considering this when casting the roles of Jean Potts and Clothilde and chose actors who might appear close enough in age to Emma Thompson and Ian McKellen to play their parts in the village and the later reunions. One of them—along with playing off a rather reluctant reunion—demonstrates the sheer age difference between spouses, even if we’re only talking about Hollywood: Gwynne, who referred to herself as being in her 50s in 2015, is still much younger than a 77-year-old McKellen.