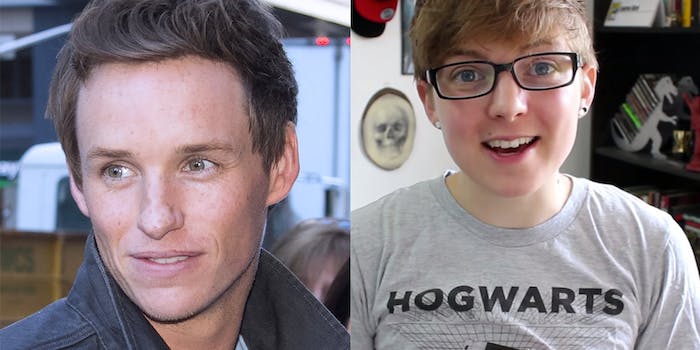 The Oscar-winning actor who will star in 'Fantastic Beasts' has his eye on the HP fan community.

When Jackson Bird, spokesman for the Harry Potter Alliance, made his moving coming-out video about being transgender, he was speaking to a supportive community of friends and progressive fan activists from fandom and YouTube.

But apparently many more people were listening—including Oscar-winning actor Eddie Redmayne, who will play the lead in the Potter sequel Fantastic Beasts and Where To Find Them.

Redmayne plays the role of remarkable transgender pioneer Lili Elbe in the upcoming film The Danish Girl. Speaking to Out magazine about the role Tuesday, he explained that he’d done a great deal of research both into trans history and into the experiences of trans men and women.

“I knew nothing about it, going in,” he told the magazine.

But then he dropped a reference that surprised many Harry Potter fans.

So Eddie Redmayne watched our spokesperson @jackisnotabird’s coming out video to prepare for his role as Lili Elbe: http://t.co/lEUdZpaVl5

Redmayne told Out he had stumbled across Bird’s video and found it deeply inspiring:

“I was watching this thing recently with this trans guy called Jackson Bird, who is huge in the Harry Potter fan community and has just come out. He does all these video blogs and is the most charismatic guy. They’re normally about the Potter world and hearing him taking his audience and going, ‘OK, so I’ve got something to tell you…’ It’s just extraordinary to watch. It’s another generation.”

For his part, Bird was thrilled.

EDDIE REDMAYNE WATCHED MY VIDEO TO PREPARE FOR HIS ROLE AS LILI ELBE. THIS IS NOT A DRILL. WTF. http://t.co/gz1D0nALIe

On his Tumblr, he added, “Cool actor having found my video because he is researching his roles as the next big Harry Potter universe lead as well as a transgender pioneer? I’m short-circuiting. “

But Bird also noted that Redmayne’s position as a cisgender actor playing a trans woman is a problematic one.

Elbe was the first publicly identified trans woman to undergo reassignment surgery. Her journey to claim her identity engaged the European public and resulted in conflicting reactions: the government nullified her earlier marriage to a woman, but also granted her a new passport under her new identity. Elbe’s quest for self-identification involved five complicated and dangerous operations carried out during a number of years. The last of these ultimately led to her death due to early medical misunderstanding of the transitioning process.

Because of the push for greater representation on screen, Redmayne’s casting, which could have gone to an actual trans woman who has lived the kind of experiences they would be portraying, has proven controversial. Previous attempts to portray Elba in film included a shelved production by Nicole Kidman in 2011. Redmayne himself recently shrugged off the controversy in the Independent, noting, “I’m acting.”

“I’m still mehhh on him being Lili Elbe because trans-roles-for-trans-actors,” Jackson wrote on Tumblr, “but I’m continuously assured that he treats everything with the utmost respect and that if Lili Elbe had to be played by a cisdude, we’re in pretty safe hands.”

Speaking to the Daily Dot by email, he added, “It’s a complicated thing and I’d be negligent if I didn’t address that.”

We also queried Bird about whether his fans can now ship him and Redmayne together. In fandom culture, “shipping” is a term used when hoping two people get together—fictional or otherwise.

“YES,” was Bird’s response. “Can my OTP include myself? That is another very important question.”