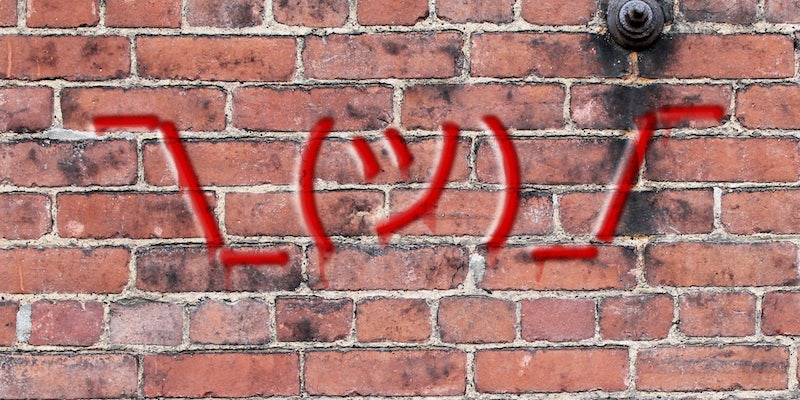 How the Internet is changing the English language

But do you even GAF, bro?

People from the midwestern United States say “pop,” while people from the coasts say “soda.” Southerners might say “y’all” instead of “you guys.” And people from the Internet say a lot, actually. Abbreviations like “v important” or “p cool” signify something that “very important” and “pretty cool” do not. The use of a ¯_(ツ)_/¯ conveys something a bit more subtle than “I don’t care,” or even “I don’t know.”

Thanks to the Internet, a previously undeveloped area of English language—informal writing—is blossoming. It began with ‘netspeak,’ shortening words to single letters, eliminating vowels from other words. Now, thanks to developments in technology and just the sheer amount of information that gets onto the web every day, linguistic trends are as varied and numerous as the websites that spawn them.

But new ways of expressing one’s self on (and off) the web are always the subject of scrutiny, usually from corners that lament the death of “proper” language. When you look closer, though, the way we write online is likely just as expressive as—and perhaps in some ways more expressive than—the ways we speak to each other in person or on the phone.

These ways of speaking also splinter across geographic regions, the dominant gender of any particular social network, and the platforms we use. In other words, there’s evidence that dialects proliferate on the web and, to a certain extent, generate on the web as well.

In 2014, Mike Rugnetta of PBS Idea Channel, posed this thought, in his usual format: “Here’s an idea, certain parts of the Internet have their own dialects.”

Rugnetta—who emphasized he is not a linguist by training or trade—told the Daily Dot that the inspiration for this particular episode of Idea Channel was based on his personal observations of his own conduct on the web.

“In my day-to-day habit of moving between chatting with coworkers on Slack, writing posts on Tumblr, Twitter, IRC, and Reddit, I realized within myself I have different ways of conducting myself on those places,” Rugnetta said in a phone interview.

Or, as he puts it in his video, “Maybe I talk more ‘Tumblrish’ on Tumblr and less ‘Twitterese’ on Facebook.”

Tumblrish, he notes, is usually all lower-case writing with little to no punctuation. Twitterese might involve more uses of shorthand, given the constrictions of the 140-character limit.

But speaking in these ways isn’t just a matter of practicality, but practice, he said.

“I think that has a lot to do with the multiple selves,” he said. “Everyone’s a different person when you’re at your grandma’s house, with your friends, or with your parents. To a certain degree, we will tailor our behaviors to where we’re posting online.”

Sometimes that way of tailoring speech can help demonstrate who’s in and who’s out.

In a paper titled, “Internet memes as contested culture capital, the case of 4chan’s /b/ board” researchers explore how users on 4chan will police other users’ improper use of memes and the community’s preferred lingo. The researchers cite one example, where 4chan anons were discussing the death of Steve Jobs. One anon used the term “derp,” to which another responded, “go back to your shitty fucking reddit.”

You can even track the rise and fall of terms like “derp” and others on Reddit using FiveThirtyEight’s Reddit ngram viewer. Sure enough, use of “derp” on Reddit peaked in 2011, around the time that the researchers collected their data from 4chan’s /b/ board.

Word use on reddit over time. Compare any words you want: https://t.co/dJsXrPLcbd pic.twitter.com/PpPPQILTA5

Words, phrases, emoji, and other forms of web expression rise, crest, and break in their popularity just like slang terms do. Linguist Gretchen McCulloch explores these trends and more on her tumblr blog, All Things Linguistic, and in her column on Mental_Floss. You might remember her writings on the grammar of the doge meme, Benedict Cumberbatch nicknames, and her thorough analysis of the “Because x” phenomenon.

McCulloch told the Daily Dot that it can be hard to track how slang terms spawn these days, because it’s less clear if they start on the web or “IRL.” But she noted that the Web can cause slang terms to explode, the most recent example with “on fleek.”

To a good chunk of America, “on fleek” came out of nowhere in 2014 and was overnight the hot new term to describe a state of perfection—particularly when it came to eyebrows. Buzzfeed traced its origins back to a vine, posted by Peaches Monroee, where she described her eyebrows as “on fleek the fuck.”

“That is what it made it catch on among white people,” McCulloch said. “But it had been used in African American English for at least 10 years.”

Now McCulloch thinks “lowkey” (not to be confused with low-key) is a new word that is making its way into the web vernacular. It’s what it sounds like—when you’re kind of or maybe secretly feeling or doing something.

But it seems like it’s been lowkey hanging out in the lexicon since at least 2005, when it was first entered in Urban Dictionary, she writes on Mental_Floss.

So what determines your web dialect? Can someone speaking to you over email, if you’re speaking in your web dialect, tell where you’re “from?” Could they determine you’re a Redditor if you use “derp” or prefer Twitter if you’re lowkey using “lowkey?” Maybe, McCulloch said. There’s not been too much study in that area. However, she noted that people tend to take on the speech patterns of the gender of their network. In other words, if you’re a man but most of the people you follow on Twitter are female, you’re more likely to tweet in a “female” way.

What emerged was an archipelago of e-dialects that mirrored the geographical and cultural divisions of the physical country. For example, the abbreviation ikr (“I know, right?”) occurs six times as often in Detroit as in the rest of the United States; suttin (“something”) mostly occurs in New York City; the emoticon ^-^, which denotes shyness, occurs four times more frequently in Southern California, where a large Korean community may have propelled it into the lexicon.

This might not suggest that there is one uniform Web dialect, or even one uniform Twitter dialect. But rather, e-dialects are as varied and nuanced as spoken ones. For example, using “smh” in an email might say that you’re well-versed in web trends, but eschewing capitalization might suggest that you’re more wont to use Tumblr, or that the people in your network happen to write that way. Just like how saying “soda” might identify you as from the coastal United States, but earnestly using “hella” might identify you as a California Bay Area native.

“Netspeak,” if the term fits anymore, has come a long way, too. It doesn’t seem like that long ago we were worried if children would “ever lrn 2 speak gud” due to how much they were warping the English language for efficiency and, maybe, character counts.

David Crystal is a linguist and one of the first to come out in defense of netspeak—used mainly by teenagers as they texted one another. He noted that criticism of the form of speaking has died down since its fever pitch in the early 2000s.

“I was in a school recently looking at a group of 16-year-olds’ text messages, and there were no text abbreviations there at all,” Crystal wrote to the Daily Dot in an email. “They simply weren’t cool any more. And one lad told me that he had stopped abbreviating when he noticed his parents had started. Definitely not cool.”

He acknowledged that the advent of unlimited text and data plans, as well as character-unlimited iMessaging might also have something to do with teens shedding abbreviations in favor of full words.

The criticism that netspeak would lead children to have a poor handle on the English language also turned out to be completely unfounded, McCulloch said.

“There’s a lot of moral panic about Internet language,” she said. “But what studies have found is that kids who text more and who use more texting slang are also actually better at standard written English.”

This isn’t as counterintuitive as it may seem, McCulloch said.

“Writing online in informal writing just gives you so much more practice with writing than people ever got before,” she suggested. “People used to not write very much at all after school, unless they were becoming literally a writer. Now we’re spending most of our days reading and writing to each other.”

So not only are the kids going to be alright, McCulloch things, but they may even be better communicators, enabled by the myriad ways of expressing themselves through emoji, GIFs, and deliberate uses and misuses of capitalization, grammar, and punctuation.