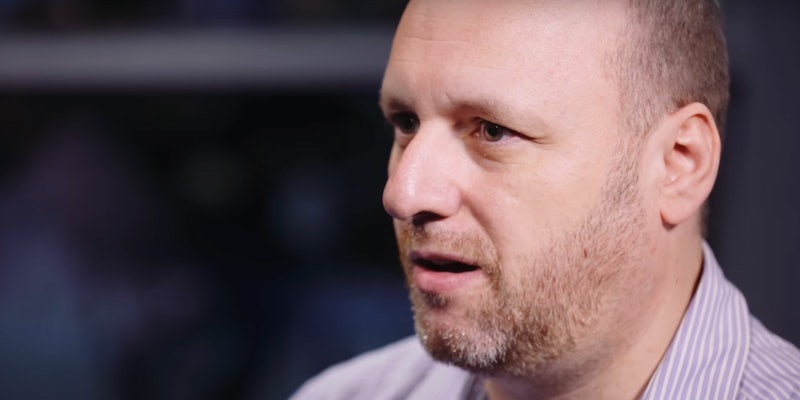 The internet is destroying the Detroit: Become Human director for his problematic writing

Everyone is done with David Cage's social commentary.

David Cage is a bit of an internet pariah these days. The director and writer of games like Detroit: Become Human, Beyond: Two Souls, and Heavy Rain has garnered quite the reputation as a wordsmith of questionable talent. While the majority of his games, created by Quantic Dream, are mechanically and visually sound (if not downright impressive for their time), the worlds and characters Cage puts in them have gotten a ton of flak from the internet as of late— for a good reason.

Detroit: Become Human, Cage’s latest game, tells the story of a city full of androids locked into servitude to humans. Three of these androids (two caretakers and an android-hunting investigator) eventually break free of their bonds and spark a revolution that alters the course of human and robot history. A story about robots gaining sentience and fighting for their freedom is all well and good, if a bit overdone by the year 2018, but some of Cage’s narrative choices have left players absolutely cringing.

Detroit: Become Human possesses a laundry list of questionable narrative decisions. In a game about escaping the bonds of servitude, the only Black characters are minor. One scene features North, an android with a proclivity for confrontation, scolding a Black character for wanting to pursue a non-confrontational strategy.

“Then live as a slave, because if you’re not willing to fight for your freedom, maybe you don’t deserve it,” North says in-game.

It’s a cringe-worthy line for anyone who’s even vaguely aware of the history behind African-American slavery. By 1882, Harvard historian James Schouler attributed the relative lack of slave rebellions to “the innate patience, docility, and child-like simplicity of the negro.” This has led to a far-reaching belief that slavery was, as rapper Kanye West recently put, a “choice,” despite centuries of subjugation and violence meant to stamp out dissent.

It isn’t a one-time occurrence for Cage, either. Multiple dialogue options in Detroit: Become Human make explicit reference to the civil rights movement of the 1950s and 1960s. While giving a rallying speech to a crowd of fellow androids, the character Markus can choose to say, “I can’t breathe, but I’m alive.” The line’s similarity to Eric Garner’s last words—“I can’t breathe”—is unmistakable.

This is fucking ridiculous I’m losing my mind.
I think the worst offender here is “I CAN’T BREATHE BUT I’M ALIVE” which appears to be an adaptation of the BLM slogan “I can’t breathe” that was popularized after Eric Garner was choked to death by police.
Fuck David Cage. pic.twitter.com/pSte9B3PAh

David Cage’s seemingly fetishistic obsession with putting female protagonists in danger of sexual assault or domestic violence is yet another trope that has permeated almost all of his work.

In Heavy Rain, protagonist Madison Page is investigating a residence connected to a supposed serial killer when she’s captured, bound, and forced to escape or be murdered in gruesome fashion. In Beyond: Two Souls, the young protagonist Jodie is nearly raped after ending up at a bar after escaping her home. In Detroit: Become Human, android Kara is separated from her young ward and imprisoned in a madman’s android memory-wiping machine. If she manages to escape, she’s hunted by the madman and his lobotomized servant, a tall black android that the game goes out of its way to frame as an imposing, deadly threat.

Good thing is if I ever get trapped in one of David Cage's sex dungeons, I've played enough of his games to know how to escape.

Most recently, Cage participated in an Ask Me Anything session on the Detroit: Become Human subreddit. When asked about the lack of gay romance options in the game (many fans have taken a liking to investigative android Connor and his human partner Hank), Cage responded thusly:

“Connor’s story could be seen as a “coming out” story,” Cage said. “The expression ‘Becoming deviant,’ his difficulty to accept who he is and to be accepted, could be interpreted as such. It is not something that I consciously thought of during the writing, but it is one of the possible ways to read Connor’s story.”

We’ll leave it to you to determine why tying homosexuality to “becoming deviant” (the in-game term for when an android turns rogue) is problematic.

This all goes to say that David Cage has been the butt of no small amount of jokes and insults on Twitter.

david cage is a really impressive dude because he can take a team of the most talented artists, modelers, environment designers, and voice actors and STILL manage to produce the most tone-deaf wet fart of a game

You: Detroit: Become Human is such an amazing look at what it means to be "alive". I just wish it was more fun to play, had better female representation, and didn't have the usual David Cage hamfisted writing.

I get the sense that at the end of writing any scene David Cage just takes like, at least a full minute to rest his hand against a wall and groan "Oh, fuuuuuuuuuuuuuuuuuckkkkk yeessssssssssss" at the weight of his perceived accomplishment

david cage: okay i already referenced segregation, the black lives matter movement, slavery and the holocaust what else can i put in my great game so ppl know androids are OPPRESSED
david cage:
david cage: gays

Despite all my rage I am still in a bad game made by David Cage pic.twitter.com/vqP1yzr1pj

Oh, and Quantic Dream has sued French media outlets over reports of workplace harassment at the studio, as reported by Kotaku.

And what does David Cage have to say in the wake of all this critical response and analysis? In various interviews with Polygon, the Verge, and Waypoint, Cage downplays the obvious allegories his own writing seems to make, stating to the Verge: “There is no big message to humanity in this game. It’s just interesting questions that may resonate with your own personal values and just confront you with the consequences [of your] actions.”

So long as Cage seems OK with being noncommittal to any bigger themes within his stories, and as the examples of cringe-inducing dialogue or social commentary keep piling up, he might continue being a joke for the internet to rag on.