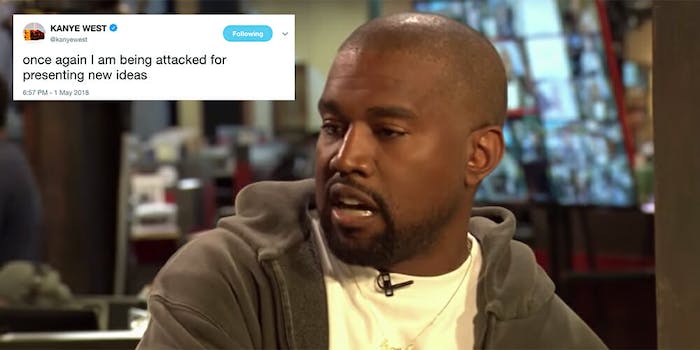 The internet is stunned that Kanye West called slavery a ‘choice’

'Once again I am being attacked for presenting new ideas.'

Kanye West on Tuesday said 400 years of slavery was a “choice” for Black people, provoking a TMZ staffer to call the rapper out on his point of view and inciting yet another wave of criticism on social media.

West visited the TMZ office in Los Angeles on Tuesday, adding to a week of him breathlessly tweeting, talking, and spouting conservative talking points.

Kanye West stirs up the TMZ newsroom over TRUMP, SLAVERY and FREE THOUGHT. There's A LOT more that went down … and the fireworks are exploding on @TMZLive today. Check your local listings for show times. pic.twitter.com/jwVsJCMPiq

The comment was too much for TMZ employee Van Lathan, who blasted West for not thinking before he speaks.

“And while you are making music and being an artist and living the life that you’ve earned by being a genius, the rest of us in society have to deal with these threats to our lives,” he added. “We have to deal with the marginalization that’s come from the 400 years of slavery that you said for our people was a choice.”

Tons of Twitter users were also incredulous at West’s remark.

The rhetoric used by Kanye West is one that’s echoed by white conservatives in an attempt to rewrite the effects of slavery on black Americans. It’s intended to minimize the struggle of a people’s fight for freedom & redemption by blaming them for the construction of society.

You called slavery a choice, white people have been trying to tell us this for years, nothing new about what you said. Just disgusting coming from someone who has slave's blood running through their veins.

West defended calling slavery a “choice” in a series of tweets Tuesday evening.

“The reason why I brought up the 400 years point is because we can’t be mentally imprisoned for another 400 years,” he wrote, adding “Once again I am being attacked for presenting new ideas.”

The interview came the same day as the release of West’s 105-minute interview with Charlamagne Tha God, and slavery came up in that discussion, too.

West said the conversation about Harriet Tubman being featured on the $20 bill “was the moment that I wanted to use Bitcoin,” adding: “It’s like when you see all the slave movies. Why you gotta keep reminding us about slavery? Why don’t you show us—put Michael Jordan on a $20 bill.”

In his TMZ interview, West also said he struggled with an addiction to opioid painkillers in 2016 following a liposuction procedure.