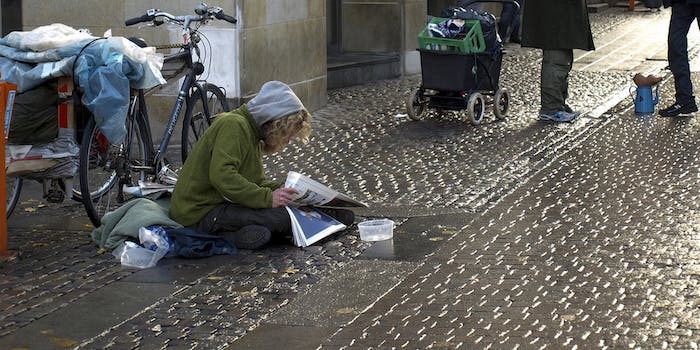 The Ali Forney Center is a non-profit shelter for queer and genderqueer teens in New York City. It’s also, thanks to the weekend blowup over DashCon, Tumblr’s newest cause célèbre.

Sunday, in the middle of endless jokes about what you can buy with $17,000 (the amount that DashCon’s hapless organizers bilked out of its attendees on the spot Friday night after their Schaumberg, Ill., hotel demanded the con pay its entire hosting fee upfront) the new Tumblr 17000dollars broke for a serious call to action:

Recently, the admins of a fan-based Tumblr convention, Dashcon 2014, ran into some trouble.  Allegedly, the staff of the hotel that was hosting their convention demanded to be paid 17,000 dollars, or else they would shut down Dashcon.  The Dashcon admins responded by asking the community to raise 17,000 dollars by the end of the night — and so they did.  The convention went on.

This has upset quite a few people, many of whom have pointed out that Tumblr users united to fundraise for a convention, but not to raise money for other causes.  A lot of these posts have specifically referenced poverty, homelessness, and disadvantaged members of the queer community; in particular, many people have talked about homeless LGBTQ youth.  Why couldn’t we have raised 17,000 dollars for them?

The owner of the Tumblr encouraged Tumblr users to fundraise $17,000 for the Ali Forney Center, and set up a donation page on the center’s website for that purpose. In just under two days, the campaign has received almost 9,000 notes and reblogs, and has generated around $3,000.

As Tumblr user thatonepalekid put it:

CAN WE JUST TAKE A HOT SECOND TO REALIZE THAT AN ENTIRE BLOG THAT STARTED AS A GIANT DASH CON JOKE TURNED INTO A FUNDRAISER FOR AN ORGANIZATION THAT HELPS HOMELESS LGBTQ YOUTH????

“I can’t really spare much, but this is a very worthy cause,” wrote one anonymous donor on the center’s website.

“I never had to worry about being thrown out for being the queer transgender person I am, but I know this is not the case for many. Thanks for turning the disaster of Dashcon into something positive.”

“[T]his is admittedly a giant dashcon joke blog,” the Tumblr’s owner responded in a later update, “but I figure if you’ve got a chance to make something good happen for people who need it, you ought to do it.”

When it’s not crowdfunding to change the world, 17000dollars is one of many joke blogs that sprang up over the weekend in the wake of an endless sea of hilarity surrounding DashCon’s misadventures, including the now-infamous ball pit. Though we can’t say it’s not exactly a useful blog. After all, now that we know that $17,000 can buy us 895 miniature violins, we have a renewed purpose in life.

We also have a renewed respect for the Tumblr community’s ability to turn just about anything into an opportunity for social justice.

Photo via Matthias/Flickr (CC By 2.0)