He still insists the Paleocene fossil is only 4,000 years old. OK, buddy.

To his credit, Nernberg, who discovered a stunning cache of five 60-million-year-old fish skeletons while excavating a Calgary, Alberta basement, could have kept the find to himself. He could have shared it solely with the Big Valley Creationist Museum, on which he happens to sit as a board member.

Instead, he contacted a paleontologist at the University of Calgary, Darla Zelenitsky, and now the prehistoric bony fish are headed to the province’s Royal Tyrrell Museum. 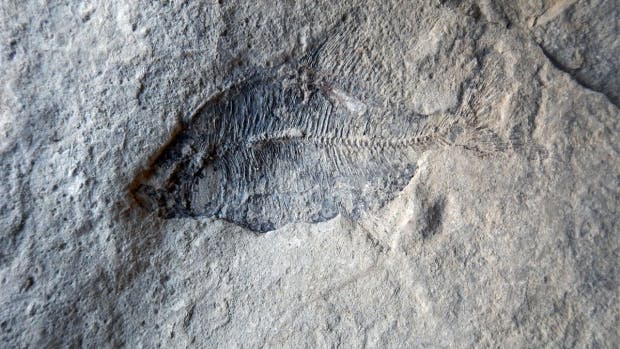 The fish are a kind of osteichthyan, or “bony fish,” which has thrived on the Earth since the mid-Paleozoic Era. Nernberg accurately noted in a press conference with Zelenitsky Thursday that his prehistoric fossils “look like any modern-day fish,” mainly because the vast majority of fish swimming in today’s seas are descended from bony fish just like these.

These particular bony fish date back to the Paleocene Epoch, directly behind the mass extinction event that ended the Cretaceous Period and wiped out most of life on Earth. In other words, these guys are the survivors. Speaking at the press conference, Zelenitsky praised the discovery as a way to glean insight about what happened after the extinction of the dinosaurs:

“Plants and animals were basically recovering from this extinction and they were starting to diversify… In order to learn about the ecosystems at the time it’s nice to know what kinds of animals were around, or plants, just so that we have an idea of how the ecosystems recovered.”

Nernberg dug the five intact fossils out of a slab of black sandstone lying along the Paskapoo Formation, a major stretch of sedimentary rock that sits beneath most of Western Alberta. The sandstone is a familiar site to most Calgary residents, and often yields its share of prehistoric fragments; but Zelenitsky noted that finding a single intact fossil among the layers—much less five—is extraordinary.

Like Zelenitsky, Nernberg really loves fossils and what he calls “earth history.” But Nernberg insists the bones are only 4,500 years old and that the earth itself is just turning 6,000 or so. His “mass extinction event” is Noah’s flood, and his belief is that the fish were wiped out during the Biblical calamity.

Let’s just be grateful he shared his discovery with Zelenitksy independent of his own beliefs, so that scientists can have a chance to research the bones and place them in their proper historical context.

Photo via TomCatX/Wikimedia Commons (CC BY 3.0)