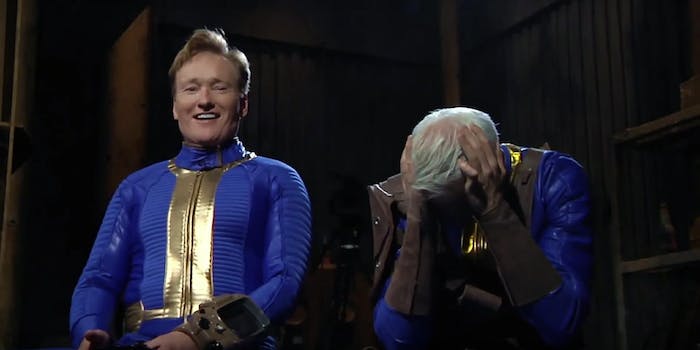 He's ready for the apocalypse.

Conan O’Brien is bringing back his Clueless Gamer segment just in time for one of the most anticipated games of 2015.

Conan and gamer Aaron Bleyaert settle down in the vault in their shiny vault suits to play Fallout 4, and it’s just as great as you’d imagine.

O’Brien is more focused on his character’s aesthetics and whether he will be able to have sex in the game (he can’t) as he navigates his way through the greater Boston area and his own set. And while he loves the game itself, he can’t help but focus on the smaller details, like the old-school Pip-Boy and the iconic blue suit.

“We died in these suits,” O’Brien says. “It’s the most embarrassing way to die.”

Bless Bleyaert for his patience.

And as he tends to do on occasion, O’Brien created a fitting Fallout 4-inspired cold open to go along with it. The impending apocalypse, complete with a Gilmore Girls security question, has never looked more cheerful.