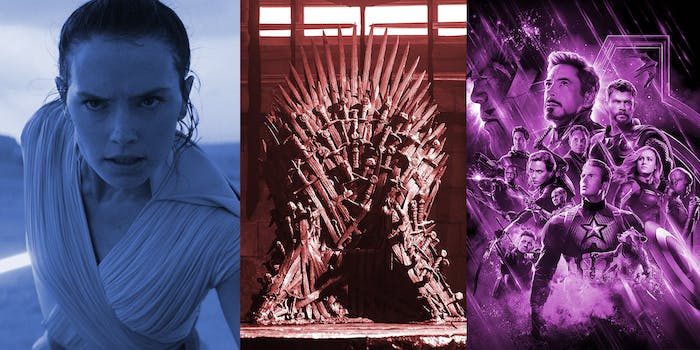 But which one nailed the ending?

For better and worse, Star Wars: The Rise of Skywalker gave us an end to what Lucasfilm has gone to calling the Skywalker Saga. It was the final say in the story of Rebellion, as Emperor Palpatine snidely remarked to Rey shortly before he met his final demise, and possibly the end of the sequel trilogy’s divisiveness, but amid its grand flourish, The Rise of Skywalker only fueled it further. No matter how much money The Rise of Skywalker ultimately makes from the film—and it will make a lot of money—it’s a disappointment in the sense that it wasn’t the film that Disney hoped would please everyone after The Last Jedi.

If you’re a fan of certain major franchises, chances are, this isn’t your first rodeo with the end of an era arriving in 2019. Back in April, we saw the Marvel Cinematic Universe (MCU)’s Infinity Saga come to an end with Avengers: Endgame. A month later, Game of Thrones, the most popular TV show in the world, also ended its reign. Each of them, including The Rise of Skywalker, came with its own fanfare, and much of the marketing zeroed in on the fact that each property was coming to an end over revealing too much of the plot.

Out of those three franchises, only one of them nailed the ending in a way that could be somewhat classified as universal. But if you asked me at the beginning of 2019 to pick only one franchise that would stick the landing, I probably wouldn’t have said the MCU.

If I had to pinpoint a single reason, it’s this. In the amount of time it had to wrap everything up, Endgame slowed down and let its story breath before it catapulted to the end. Game of Thrones’ final season and The Rise of Skywalker, for the most part, did not in their respective spaces. The Rise of Skywalker tried to fit too much plot into a single film with the runtime it had (especially in its first act), a ploy to apparently please everyone. On the other hand, Game of Thrones tried to skim over the finer points in its final four episodes after taking the first two to breathe, its creators rushing to wrap up this series and seemingly more interested in working on their Star Wars series (which they’ve since left) or their next project.

But nothing ever ends, as Dr. Manhattan notes in the Watchmen comic, and even though we’ve all seen these franchises end, their future is just beginning.

The endings in 2019: Star Wars, Game of Thrones, and Avengers

Endgame, Game of Thrones, and The Rise of Skywalker all harken to the films and seasons the came before them, and if any franchise has earned that right, it’s these three. Endgame is the 22nd film in a franchise that spans over a decade. Game of Thrones bowed out after eight seasons. And The Rise of Skywalker is the biggest of them all, capping a nine-film saga (along with a couple of spin-offs and TV shows that take place during the saga’s timeline) spanning the past 42 years.

In Endgame, Marvel went for nostalgia by literally replaying the hits. Five years after the events of Infinity War, the surviving Avengers teamed up for a Time Heist to grab the Infinity Stones to create their own gauntlet and reverse Thanos’ snap while visiting three previous films in the process. Some of that was more for our amusement, like a scene where Endgame’s Captain America fought Avengers’ Captain America, the former who later placated suspicion from S.H.I.E.L.D. by offering a “Hail Hydra.” It also fueled the plot as a Guardians of the Galaxy-era Thanos caught wind of the plot and planned to enact his plans to snap half the universe out of existence in a different way. And in the case of Thor, he was finally able to get some closure with his mother Frigga and discover that despite his own trauma, he was still worthy of wielding his hammer Mjölnir.

Game of Thrones’ nostalgia came largely in its script. Thanks to the Game of Thrones cottage industry, entertainment journalists have been keeping track of all the times a character, a costume, or an exchange would echo something that happened several seasons ago; in season 8, Game of Thrones’ official blog got into the game. At times, when Melisandre asked Arya what to say to the god of death to help motivate her to kill the Night King in season 8’s “The Long Night,” it carried an emotional weight because of what it harkened back to. Other times, the callbacks felt inserted for the sake of a callback, one of many to make its way into a weekly list.

But in The Rise of Skywalker, the nostalgia veered back into the forefront as legacy characters like Lando Calrissian came back into the spotlight in a trilogy that continued the stories of Luke Skywalker, Han Solo, Leia Organa, Chewbacca, and droids C-3PO and R2-D2 after The Force Awakens and The Last Jedi. But The Rise of Skywalker sometimes struggled with what to do with these legacy characters, so at times, their appearance was more of a distraction than something that serviced the plot of the new film or these new characters.

The stakes, real and otherwise

All three franchises didn’t shy away from death. The first Star Wars film blew up an entire planet with the Death Star and killed Luke’s mentor Obi-Wan Kenobi. Game of Thrones’ body count was notorious with fans still particularly traumatized by the deaths of Ned Stark, Oberyn Martell, and the Red Wedding. The MCU had the end of Infinity War, in which Thanos snapped half the universe out of existence.

It’s here that all three entities struggled to various degrees, least of all because it’s hard to kill off the face of your franchise. Infinity War made us watch the deaths of several superheroes as they turned into dust, but for many fans—whether they knew how comic book stories worked, lost the suspension of belief, or a mix of both—the moment didn’t work. But Endgame, in having established over 22 films just why we’re invested in these characters, undid the ill-will left by Infinity War.

Sure, all of the dusted heroes returned for the final fight against Thanos, and it might have only killed a handful of characters by the end of the film. But with the deaths of Black Widow and Iron Man (and its choice to let Captain America fade into the sunset), it made the biggest impact it could’ve with as few bodies as possible, and while we might argue about if Black Widow had to die over Hawkeye and the time travel elements of the end, the legacy of Iron Man still remains.

After The Last Jedi took out most of the Resistance forces before Luke Skywalker made his last stand, The Rise of Skywalker seemed hesitant to kill its characters, perhaps wary of writing off someone who could live on in tie-in novels and comics. Leia Organa was almost a given because of the limited footage director J.J. Abrams had to work with of Carrie Fisher, as did Kylo Ren, the trilogy’s de facto villain, even if he did redeem himself before the end. So did Emperor Palpatine, who was somehow back from the dead for this film.

Apart from Rey’s temporary death, the Resistance remained largely unscathed. The film left the new trio alone, as well as legacy characters like Lando, Chewie, and C-3PO. We had at least a half-dozen fake-outs, making scenes like C-3PO’s memory wipe, Chewie’s presumed death after Rey destroys a transport with Force lightning, and Ben Solo being blasted off a cliff by Force lightning all feel cheap. And our only real casualty on the Resistance’s side in the Battle of Exegol? Snap Wexley, the X-wing pilot in Poe Dameron’s old squadron who was often a major player in the Star Wars tie-in comics and novels, but casual fans might just know him only as Abrams’ long-time friend Greg Grunberg.

And as much as Game of Thrones became infamous for its body count, it seemed hesitant in later seasons to kill off major characters in the latter half of the series. Most of the deaths during “The Long Night” were secondary and tertiary characters, albeit some of whom we’ve been following for nearly a decade—as well as countless and nameless extras. It took until the penultimate episode of the series, “The Bells,” for major characters to be taken off the map (and the series finale for the biggest player). But even then, at least one major family was untouchable, one of many knocks against an already polarizing season.

The future is already playing out—by retreading the past

Despite the narrative that these stories were the end of an era, we almost certainly know that’s not the case. First, because there’s almost no way Disney or HBO would just let these properties fade into the sunset when there is potential money on the line. But also, these universes are so expansive that those stories can come out on their own.

Spider-Man: Far From Home came out in July, which served as a kind of coda on the Infinity Saga as Peter Parker had to learn how to be a superhero without his mentor. A few weeks later, Marvel Studios unveiled a mix of films and Disney+ TV shows at San Diego Comic-Con; since then, several more Disney+ shows have been added to the Phase 4 slate. Game of Thrones is also stepping back into familiar territory. We won’t see any familiar characters in the prequel series that HBO is developing, but after axing its Age of Heroes show, HBO greenlit House of the Dragon, a Targaryen-centric show that has its basis in Fire and Blood, straight to series. And it’s got all of the familiar Game of Thrones elements, which include dragons, violence, and old-fashioned Targaryen incest.

The future of Star Wars in film after The Rise of Skywalker is less certain, especially after the departure of David Benioff and D.B. Weiss from their project that was set to drop in theaters in 2022; The Last Jedi director Rian Johnson is still officially developing his own films. But right now, television is where it’s at between The Mandalorian, which takes place after Return of the Jedi, the Ewan McGregor-led Obi-Wan series that takes place prior to A New Hope, and a Cassian Andor series that predates Rogue One.

To its benefit and detriment, these franchises are largely looking back to their past. If you’re reviving a franchise, as Star Wars did with The Force Awakens in 2015, nostalgia can go a long way. But as we’re already seeing with pushback to The Rise of Skywalker, that can only get you so far, making us both wary and even more curious to see what the next generation of stories can do.