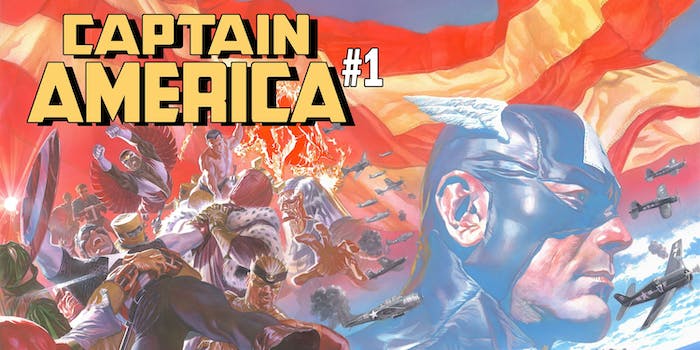 While superhero relaunches usually try to provide a clean slate, this one is unavoidably shackled to the past. Last year, Captain America starred in the controversial Secret Empire storyline where he was revealed to be a secret fascist, alienating many fans. Steve Rogers’ betrayal was eventually retconned as a complicated fake-out, but the damage was already done.

This new comic hands the reins to acclaimed Black Panther writer Ta-Nehisi Coates, artist Leinil Francis Yu, and colorist Sunny Gho. It’s not the clean break some readers may expect. It begins in the thick of Secret Empire’s aftermath, with HYDRA supporters still protesting in the streets, and America grappling with its recent escape from totalitarianism. The original Steve Rogers is back in action and back in his stars-and-stripes uniform, but he has more baggage than ever. His face was recently co-opted by a dictator, and now he’s defending a frightened and divided nation.

Captain America #1 is harder to get into than the electrifying first issue of Coates’ Black Panther. The nostalgic cover art – drawn by Alex Ross, who specializes in beefy vintage superheroes—seems intentionally ironic, offering Cap’s square-jawed profile above a WWII naval battle. A propaganda poster for times gone by. Then you open the comic and remember that we’re in 2018.

Along with being woefully mis-timed for the first year of Trump’s presidency, Secret Wars suffered from painfully muddled politics. The story depicted a neo-fascist uprising, complete with internment camps. We were led to believe that Steve Rogers was a HYDRA agent since the 1930s, but Marvel balked at the accusation that Cap was a Nazi. HYDRA were meant to be non-idealogical fascists, whatever that meant. Meanwhile, Marvel offered HYDRA merchandise that at one point showed up at a white nationalist rally. Repeatedly mishandling the discourse around this storyline, Marvel failed to express a real understanding of the backlash. That’s why it was such an exciting move to hire Ta-Nehisi Coates for the relaunch.

In his non-comics career, Coates writes about race and politics in America, examining the country’s deep internal divides. He represents the opposite of how Marvel might have swept Secret Empire under the rug, by relaunching Steve Rogers as an optimistic, inspirational figure. But Captain America isn’t inspirational in the same open-hearted way as Superman. He’s more about hard work. as well you might be if you lived through a full century of American struggle.

Also, Captain America—both the comic and the character—isn’t woke. Judging by the cast of issue #1, this story is intentionally (not incidentally) about old white people. Our lead characters are two white guys (Steve Rogers and Bucky Barnes) and a white woman who is firmly embedded in the military-industrial complex (Sharon Carter). The villain, who is still in her introductory stages, is Russian—although not in the Rocky IV propaganda sense. She’s a sexy mutant vampire. We’ll see how that pans out in later issues.

Leinil Francis Yu’s Steve Rogers is stone-faced; almost impenetrably grim. It takes a while to get used to such an expressionless protagonist, making me think about a strange aspect of the Captain America mythos. He’s famous as a symbol (and now as a movie star), but if you asked someone at random to describe his personality, they’d be hard pressed to give an answer beyond, “Patriotic, maybe?” Most people have a vague idea of what Batman and Superman are like on a personal level, but Cap is more of a cipher. In the better iterations, this malleable public image is built into his role.

Thanks to the super-serum, Steve Rogers is much older than he looks. (This is especially apparent beside longtime girlfriend Sharon Carter, who now looks old enough to be his mother.) He’s unavoidably image-conscious, aware of his political power as a symbol. But in the wake of the HYDRA uprising, he doesn’t attempt a publicity campaign to revitalize his tarnished image. That’s not his style. He just keeps his head down and does his job, avoiding any public expression beyond an inspirational speech to a child. There’s no crack in the facade, so we have to rely on his internal monologue to learn anything at all.

Tired and grim, Steve Rogers isn’t a cynic, but he is a realist. He has deep thoughts about America, and how the country fell to fascism so rapidly last year. Not through being conquered by an infiltrating enemy, but by welcoming it with open arms.