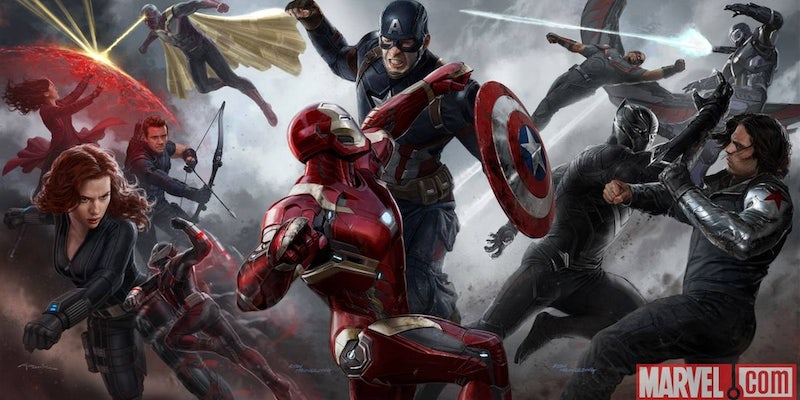 By following the formula for big 'event comic' crossovers, Marvel Studios may be abandoning its heart.

Marvel‘s franchise formula is the envy of Hollywood, and it copied its best tricks from a decades-old superhero comic publishing strategy.

In Marvel’s “shared universe” model, fans follow the individual franchises of their favorite characters, and everyone shows up for team movies like The Avengers. For years, the company has borrowed this formula from superhero comic publishers’ love of crossovers and team-ups, but Captain America: Civil War is the first to really replicate the idea of a crossover “event.”

Event comics tend to inspire a mixed response from fans. Events like Secret Wars or Crisis on Infinite Earths, announced every few years by Marvel or its rival DC Comics, consist of a central miniseries supported by spinoffs and tie-ins, all covering the same story. In the case of 2006’s Civil War, the normal workings of the Marvel universe were interrupted so every character could take sides on the Superhero Registration Act.

Sometimes these crossovers can be brilliant, creating the kind of depth and complexity that can only be achieved with a huge cast and multiple creative teams. But they can often feel like a cynical cash-grab, needlessly interfering with ongoing character arcs to make way for a storyline imposed by the publisher.

In the case of Captain America: Civil War, a film that we otherwise rated very highly, this was a valid criticism.

The addition of an ensemble cast—especially Robert Downey Jr., the MCU‘s headline act—was a clear attempt to draw audiences from every strand of the franchise. Civil War holds together impressively well under this influx of new characters, but its ensemble nature still derails the arc of the first two Captain America movies. Steve Rogers’ character development is overshadowed by an epic, five-franchise crossover, and Bucky Barnes misses out on the resolution he needed after The Winter Soldier.

Civil War‘s creators did an excellent job of balancing fun and insightful character moments among the cast, but the truth is that most of those characters don’t actually need to be there at all. Ant-Man and Spider-Man have zero influence on the plot. Hawkeye is unnecessary. Even Black Panther, who has one of the most compelling arcs in the movie, could be removed with relatively little impact on the film’s central conflict.

In reality, these characters are only on the screen to cross-promote their own franchises. They’re human teaser trailers, a role that echoes the common accusation that comic-book event storylines are little more than a marketing ploy.

The key difference between this and an event comic is that there are no second chances in Hollywood. Captain America will make his next appearance in Avengers: Infinity War, which stars a cast of more than 60 characters, and if Chris Evans doesn’t sign up for more movies, Steve Rogers’ story is over for the foreseeable future. Fans don’t have the option of picking up his solo arc a few weeks later, because Marvel movie canon consists of about six hours of footage per year.

Civil War proves that while movie crossovers share the same strengths and weaknesses as their comic-book counterparts, they pose a much greater risk to the integrity of each character’s emotional journey. Yet as long as those crossovers keep making money, Marvel will continue to make them—even if it takes time away from the more intimate stories that made Thor or Captain America so popular in the first place.